My first reaction: what an awesome idea.

My second reaction: they lied to subjects about the purpose of the experiment and didn’t fully inform respondents about what the surveys were about; their human ethics committee is far more awesome than others.

My third reaction: I hope this gets published despite that many of the main effects are statistically insignificant.

I’ve read a bit of the literature on preferences for homogeneity. It depresses me, but I’d hoped that longer exposure to more diverse groups would overcome some of those effects. And as it’s hard to tease out causality in population based measures, you could argue the toss on it.

Ryan Enos at Harvard’s Department of Government approached things a bit more scientifically. Here’s his experimental design. Get a bunch of train stations in ethnically homogenous white areas of Boston. Half of them are controls. The other half get a pair of obviously ethnic Hispanic confederates who are going to ride the morning commute for a week while chatting with each other in Spanish – other commuters could assume that a Hispanic family had moved into the neighbourhood and were commuting into town. Pre-survey people at all stations and get them to give an email address for follow-up surveys. Among the questions, ask about attitudes towards immigration. Half of respondents were invited to answer the survey again three days after treatment began; the other half were invited to do so ten days later.

Figure 2, replicated below, has the main results. 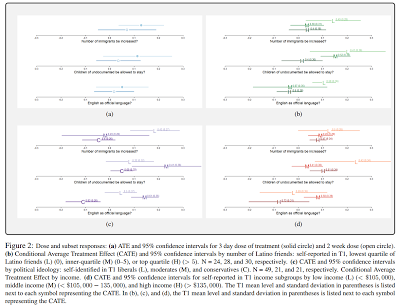 My take-away is that I should expect increased immigration to make people more hostile towards immigration but that the effect is likely to wash out over time.