In this post Simon Johnson argues the best analogy for New Zealand’s choice to opt out of a second commitment period (of reducing emissions) under the Kyoto Protocol – is: unfaithful men who won’t commit to their partners! New Zealand governments have behaved faithlessly towards Kyoto. The current National Government under Climate Minister Tim Groser won’t commit to Kyoto stage 2. And the 1990s National Government gave a commitment they had no intention of being faithful to. New Zealand politicians and diplomats intentionally negotiated Kyoto so that New Zealand’s Kyoto target would be met without reducing either gross or net emissions of greenhouse gases

I have argued before that New Zealand did not sign the Kyoto Protocol in good faith. As we seem unable to commit to Kyoto stage 2 in good faith, I have had another look at how faithful New Zealand’s position was at the beginnings of Kyoto and at ratification in 2002.

According to a UNFCCC account of the Kyoto negotiations ‘Tracing the Origins of the Kyoto Protocol: An Article-by-Article Textual History’ on page 48;

“New Zealand was the only Party which made an early, more comprehensive proposal on the treatment of sinks, suggesting that sequestration of greenhouse gases from certain listed categories should be added to a Party’s emission budget” (paragraph 226)

“New Zealand…faxed through a proposal for the treatment of sinks…sinks would not be included in a Party’s baseline, but removals would be credited to a Partys budget (the so-called ‘gross-net’ approach).” (para 227)

(NB ‘Sinks’ meaning forests or land-use or land-use-change that sequesters carbon dioxide from the atmosphere. So the New Zealand diplomats were ‘ahead of the curve’ in negotiating to get forest sinks recognised so they could offset other emissions.)

In October 1997,three weeks before the UNFCCC meeting in Kyoto, Simon Upton, the Minister for the Environment in Jim Bolger’s National Government said in a speech:

Let’s look at the advice the Ministry of Foreign Affairs and Trade gave the government in February 2002, prior to New Zealand ratifying Kyoto that year. It was in a document called National Interest Analyses – Kyoto Protocol Part II

MFAT were especially proud of that last point, making a profit. “New Zealand’s effectiveness in climate change negotiations means it is one of the few developed countries that stands to make a small net economic gain from the first Kyoto Protocol commitment period.”

So what would MFAT’s predicted increased emissions and forest removal units look like on a chart? If I assume that the emissions growth in the maximum scenario (an additional 75 million tonnes of carbon dioxide equivalent greenhouse gases) is represented by a linear increase of 0.94% p.a. from a base of 73 million tonnes in 1990, and the forest removal units are issued equally over 2008 to 2012, it looks like this. 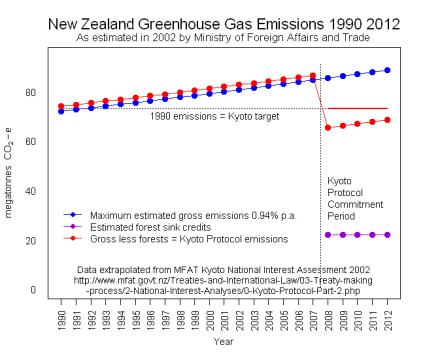 Except for the straight line, which is from my linear growth assumption, that looks very much like the current gross, net and Kyoto emissions, which I update below in a brand new animated ‘Kyoto Escalator’ chart

It’s interesting to note the implicit predicted growth rates from 1990 in the Ministry for the Environment’s November 2012 calculation of the net Kyoto Protocol position. Although the ministry predicts a surplus of units (and therefore exceeding the Kyoto target), this will happen in spite of an estimated 80% increase from 1990 to 2012 in annual net emissions and a 27% increase in gross emissions. The actual gross and net emissions to 2010 have grown by 19.8% and 59.5% respectively, as shown in this chart 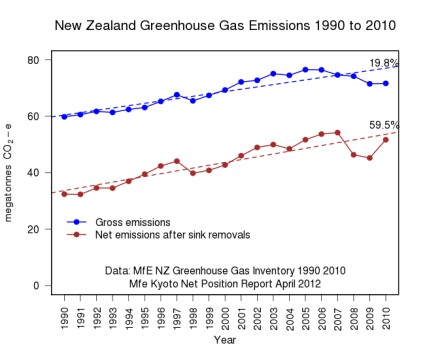 This is why whenever we hear Tim Groser or Nick Smith claim the New Zealand is meeting it’s Kyoto target, we need to realise they are being the ultimate uncommitted unfaithful partner; in spite of their smooth rhetoric of caring about global warming, New Zealand’s gross and net greenhouse emissions are both showing an increasing trend. 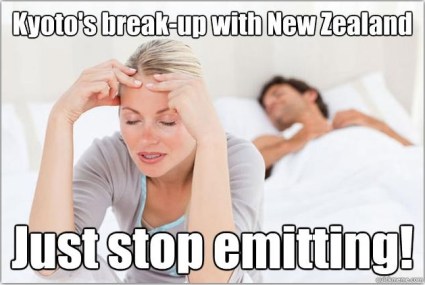 NB The original meme is the Kyoto New Zealand break-up and all the images are at Picasa at Kyoto’s Break-up with New Zealand where they can be viewed as a slide show. Feel free to use them and make up some more.