There has been a lot of handwringing over the last decade or more about savings rates in New Zealand. I’ve never been sure that it’s all that much of a problem except inasmuch as it would make it hard for a later government either to raise the age of superannuation eligibility or to cut superannuation rates in a hurry if nobody got around to slowly raising the age of eligibility on a fixed future schedule.

Emma Gordon, Grant Scobie, and Yongjoon Paek find household savings are higher than we had previously thought, and even more so when we consider the savings held in the NZ Superannuation Fund. They also find that we’ve overstated the current account deficit by a couple of percentage points.

The consequence of these is that some of the very extreme levels of household dissaving seen between 2004 and 2009 have been revised such that the current estimates of negative saving by households from the household income and outlay account are very much more modest. Over this period the annual average change was an improvement in the saving rate of households of over 7 percentage points of disposable income. These revisions underscore the importance for the policy debate to be grounded in solid evidence, and for full cognizance of the limitations of the underlying data.

The second bit of good news: the long term projections aren’t as bad as we might have thought. John Creedy and Kathleen Makale have built some probabilistic projections on social spending. The baseline case is below. 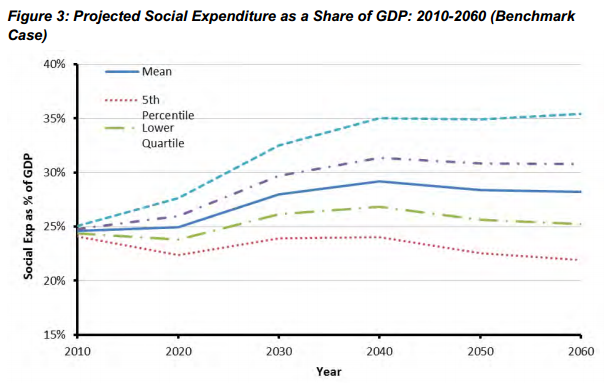 Those are mean estimates with a lot of uncertainty, as you can see from the relatively wide bands around the mean in the figure above.

If we can manage to increase the age of superannuation eligibility to 70 and keep people in the labour force for longer, social expenditure as a fraction of GDP will max out at around 24% of GDP in 2040 rather than around 29%.

I’m not sure how much of the work in the mean projections around less growth in social expenditure comes from increasing the age of superannuation eligibility and how much comes from assuming people will work longer rather than self-fund retirement before Super kicks in (in combination with pushing back some age-related health care expenditures). And all the central tendency numbers seem to depend on maintaining recent relatively higher immigration rates, which likely in turn depends on fixing land use planning so that Green-style xenophibia-via-housing-prices doesn’t get entrenched. And they also might depend on an assumption that mortality rates only decline through the next 15 years and are flat thereafter: a Superannuation age of 67 or 70 could be a lot more costly if retirement duration keeps lengthening. If we set the age of superannuation eligibility to increase to 70 over a medium term, then automatically increase it with life expectancy to give a fixed expected retirement duration, that would help a lot. And it’s still not good: those are the kinds of numbers I’d like to be seeing for total government expenditure rather than just social expenditure, though that’s more of an aesthetic preference. But I was scared it was going to be worse. So that’s the better news.