Boy, they keep looking for dark linings to silver clouds, don’t they?

Here’s Jennie Connor on the latest findings from the Ministry of Health hazardous drinking survey. She says,

“I was quite alarmed by the results. In particular, in the age 18 to 24, one in four women are drinking in a hazardous fashion. And for the men, it’s even higher – it’s over 40 percent. So I think we should be very concerned about that.”

So, what’s so alarming? Let’s look at the survey.

First, note that hazardous drinking patterns are defined as a score of 8 points or more on the 10-question Alcohol Use Disorders Identification Test. Here is an online version of the test. I score a six for having a glass of wine or beer with dinner every night, having seven or more standard drinks less than once per month, and for having a feeling of guilt or remorse after drinking* less than once per month. It isn’t hard to score an 8; that’s why so many people score an 8.

Now, what do the time trends look like? Here are the charts from the document. 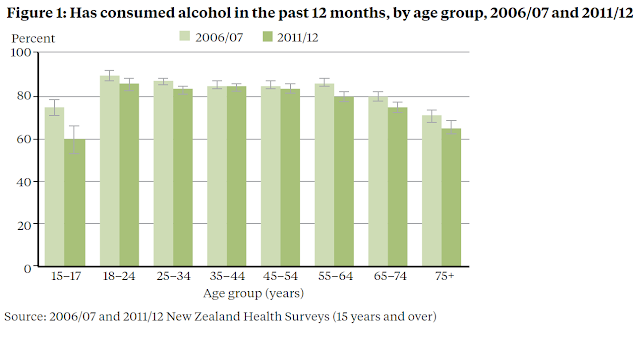 Recall that I’ve previously argued that there is no evidence of any crisis in youth drinking, that Steve Stillman has found the same thing using more rigorous method than my ocular least squares, and that the monster-shouters have shouted a lot about how we need to up the alcohol purchase age to 20.
Now on to hazardous drinking. In all the tables below, you’ll note that the rates are defined as a proportion of those who drink, not as a proportion of everybody. This matters when the proportion of non-drinkers is rising. If you’re comparing 2011/2012 rates to 2006/2007, and you want to normalise to total population rather than to the population of drinkers, you have to multiply by 0.8 for 2011/2012 and by 0.84 for 2006/2007. In other words, the drop in hazardous drinking is even larger when we measure it as a fraction of the total population rather than as a fraction of all drinkers. 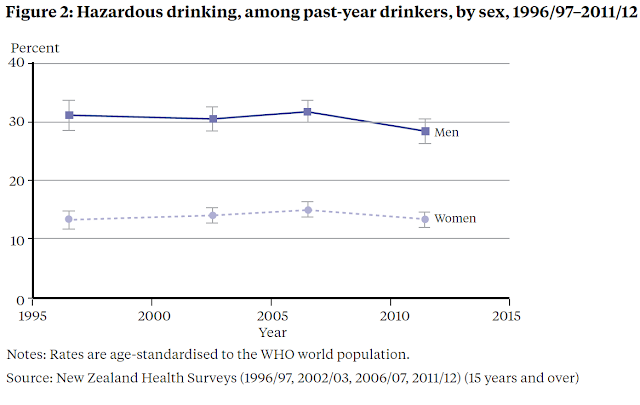 The Ministry of Health also is very clear that the tables above understate the drop in hazardous drinking if we’re interested in it as a proportion of the overall population. They write:

When we break things down by age and gender, the highest rates are among young men. 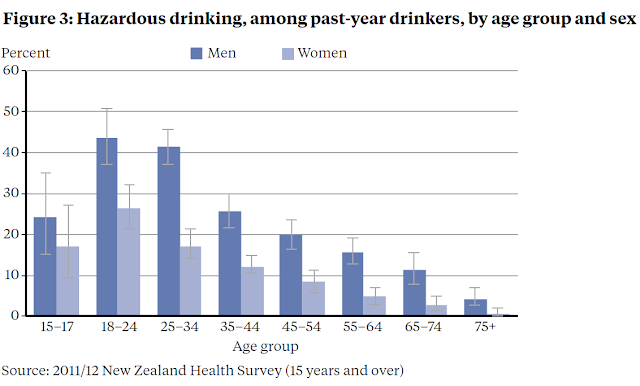 But when we look at the trend, it’s dropped substantially among 18-24 year olds since 2006/2007. And, again, this understates the true drop because the proportion of past-year drinkers has dropped. 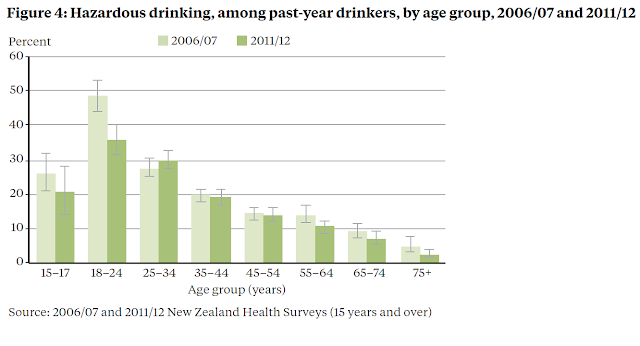 If we look at income patterning, richer people are more likely to have consumed alcohol in the last year but, conditional on consuming alcohol, poorer cohorts are more likely to report hazardous drinking. Netting the two effects, MoH reports, “As a proportion of all adults, about 18% of those living in the most deprived areas and 11% of those in the least deprived areas had hazardous drinking patterns.”

The cross-sections tell us where potentially problem drinking is currently concentrated. But the big picture really shows declines in potentially harmful drinking. If the anti-alcohol brigade had managed to get a purchase age increase in 2009, they’d be claiming these results as strong evidence of their success, while insisting that much more is still needed.

Why isn’t the anti-alcohol lobby celebrating these results instead of saying how alarming they are? Do they somehow need for there to be a crisis?

* Note, it’s after drinking, not because of drinking. I have a glass of wine or beer with dinner just about every night. Do you go a month without regret?

0 Responses to “Our manufactured drinking crisis”