Team NZ sadly didn’t win the America’s Cup. It would have been a good party in Auckland if we had. Just like the RWC was.

With more than a little hubris, there were numerous media stories on the economic benefits of winning and hosting the America’s cup. Now it appears it was too early.

In response to one estimate that the benefit would be $500m, I was quoted as colourfully describing that:

[The economic benefits of hosting the event would be based on] over-hyped studies that are proven to be absolute b…….. after the fact.

For the record, following is what I sent to each media query on the economic benefits of the America’s Cup.

MBIE recently published a report which shows there are economic benefits, but they are smaller than the hype. It also puts a nice CBA framework forward.
http://www.med.govt.nz/majorevents/pdf-library/news/MEDF-evaluation-report.pdf

And there is this from Sam Richardson at Massey:
http://economics-finance.massey.ac.nz/publications/discuss/dp1202.pdf

In the lead up to the RWC, we looked at a range of events. International studies of sporting events fall into two categories, those done before the event, and those done after. The studies in the lead up to events on average forecast economic boost of around 1% of GDP. The studies done after the event estimate economic boost of around 0.1% of GDP (see chart below).

Once the initial boosterism fades, large economic benefit estimates are largely disowned and there is a greater focus on intangible benefits such as showcasing the area, long term positive association and somewhat esoteric ‘feel-good’ factor.

There is nothing wrong with events. They are fun. But the fetishist need to justify it on economic grounds is entirely unnecessary. Events provide very small, if any, tangible net economic benefit. There are many other intangible things that can be good, like speeding up the beautification of the city, or finishing off motorways in the lead up to the RWC for example. Its not that they wouldn’t have been done, but events have a habit of getting things done on a deadline. 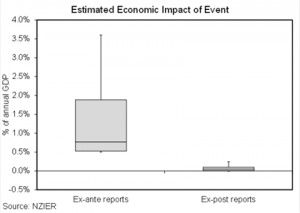