We need to fix how we handle heritage buildings in New Zealand.

The current rules let Heritage Boards designate buildings and effectively make them untouchable. The burden of providing the heritage amenity falls on the owner of the building. Where the building then cannot earn any kind of commercial return, there are problems.

I’ve suggested an alternative structure where we run heritage protection as an on-budget Council expenditure. Have each Council decide how much money they’re willing to put into heritage preservation, perhaps have Central provide a matching grant, and open it up to further voluntary contributions from the public. Then, have the heritage boards decide how and where they want to spend the money – paying building owners for the amenities they provide. This would force some consideration of the cost of providing some heritage amenities and focus preservation efforts on where they’re most cost effective.

The Environment Court has ruled the Harcourts Building on Lambton Quay, which is just 17% of building code, cannot be demolished.

The owner appealed when the Wellington City Council rejected his application to pull it down.

Property Council Wellington president Ian Cassels says the parties disputing the demolition proposal need to come together and find a solution, rather than leaving the building as it is.

…The building’s owner Mark Dunajtschik says the category A listed heritage building is not commercially viable and he wants to replace it with a new building.

He won’t be spending any more money on what he calls a lost cause.

“It will be demolition by dereliction. It will crumble sooner or later. It won’t be in my lifetime but it will crumble and it will be just (a) very derelict building on Lambton Quay.”

Mr Dunajtschik says he will cordon off the building for safety reasons.

In the judgement obtained by Radio New Zealand, the Environment Court agrees the building does have significant seismicity issues and can’t be rented out, but says that does not justify its demolition.

…A Wellington City councillor says she’s delighted with the decision.
Iona Pannett says the ruling is great news for heritage in Wellington.
“It’s an absolute win for heritage post Canterbury. Of course people are increasingly concerned about public safety in earthquake prone buildings but basically the court has found that the heritage values are very important and the building needs to be preserved.

Wellington, frankly, terrifies me. In the absence of either liability rules that would induce building owners to make buildings safe, or effective and timely enforcement of rules that would protect pedestrians and drivers from collapsing buildings when Wellington gets its big earthquake, we’re going to have a lot of people die. And not just die – die in a way that could have been prevented, ex ante, in cost-effective fashion. People dying is always tragic. Deaths in earthquakes are somewhat unavoidable. But deaths caused by regulatory structures that force that little value is placed on human life, or that prevent a building owner from tearing down a building very likely to kill a pile of people in a quake, are worse than tragic – they’re stupid. When I look at the Harcourts Building on Lambton Quay, it looks pretty, but I just can’t see the picture above without seeing bodies crushed under that beautiful high masonry. 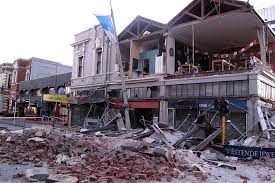 Christchurch three years ago. Even two-story buildings can impose substantial risk out through the middle of the adjacent street. I’m not going to go searching for images that have body parts sticking out from under bricks and fallen unreinforced masonry. But, Wellington, you’re going to see them on Lambton Quay if the fault opens up between now and the 30-year limit for fixing these kinds of things.

Heritage amenities are important. There’s decent reason for subsidising their provision. But I sure know I wouldn’t be able to sleep at night if I were the one who stood between the Harcourts building and the bulldozer.

I’d thought that Wellington’s minor quake earlier this year would have encouraged sensible thinking up on the North Island.