The Household Labour Force Survey (HLFS) data has been volatile recently. It is survey based and is usually benchmarked to Census data. Sampling is also affected by Census results. The latest Census data suggest some big revisions ahead for many of the published HLFS indicators, including employment. 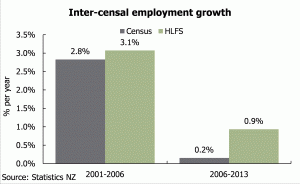 Intercensal employment growth (compounding rate) in the Census and HLFS aren’t the same, but the difference looks awfully big this time around (perhaps because the Census was delayed by two years due to the Christchurch earthquakes).

A rough and ready ‘taper’ to make the HLFS and Census consistent could mean that the level of employment looks very different after revisions next year. The regional estimates will also change considerably. 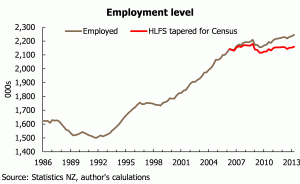 I am reiterating from yesterday, but comprehensive data  from the Census give us a better understanding of the economy and rebase surveys and other measures to reduce errors. Any attempts to discontinue the Census should carefully consider the many costs of not doing it.