Jennie Connor makes a series of interesting claims in the ODT.

Let’s take them in turn.

She says ”education and persuasion strategies” are popular with policymakers, governments and the public ”because it seems to make sense”.

”The problem with them – they don’t work. There’s no evidence that they work.”

And, that, she says, is an ”international consensus”, based on research done on thousands of educational programmes.

I’ve certainly not read thousands of studies on educational programmes around alcohol. I’ve seen meta-analyses that include about thirty. Things like D.A.R.E. seem pretty useless.

But some other programmes seem reasonably effective, depending on what your desired outcome is. In colleges, it’s often been pretty effective to simply put up posters advising students of what the actual drinking rates are. Social norms are often set by the visible extroverted drunks. Simply telling people things like “Most (81 percent) of Montana college students have four or fewer alcoholic drinks each week” can let people adjust their consumption to meet the actual norm rather than the perceived one. Where people base their own behaviour on their perception of social norms, and where they think it’s pretty normal to get hammered regularly (rather than relatively rare), just telling them the actual stats on their classmates’ alcohol (or tobacco, or drug) consumption can help ground social norms in actual moderate behaviour. Now, if your goal is to eradicate drinking, this will hardly work. But these kinds of interventions seem to work to reduce harmful drinking habits.

Perkins and Craig (2002) conducted the most thorough and comprehensive evaluation of a social norms marketing campaign. Their intervention combined a standard poster campaign with electronic media, an interactive web site, class projects that developed parts of the campaign, and teacher training for curriculum infusion. It was begun in 1996 at a college with higher than average alcohol use. Multiple evaluations that were conducted determined that: 1) increases in drinking that normally occur during the freshman year were reduced by 21%; 2) previous weeks’ high risk drinking decreased from 56% to 46%; and 3) alcohol-related arrests decreased each year over a four-year time period. Corresponding reductions were also found in misperceptions of use, heavy drinking at a party, and negative consequences associated with alcohol use. Surveys conducted at three time periods over a five-year period indicate successive linear decreases in all of these measures over time.

I’m not sure I’d be as quick as Connor to write off the effectiveness of some of these kinds of programmes. Sure, D.A.R.E. sucks. But posters in college dorms reminding folks that it isn’t normal to get drunk all the time, where they’re grounded in actual data about those students’ peers, seem at least somewhat effective.

Prof Connor says educational programmes raise awareness there is a problem with alcohol.

”And they have no effect on behaviour.

”Even some of the programmes that show a modest amount of effect on drinking in the short term, it doesn’t last.

”There is no evidence of any sort of education programme that produces a real change in hazardous drinking or harm.”

Prof Connor says education does not work for smoking, eating fast food or any kind of health behaviour.

The norms campaigns above, or at least according to Berkowitz, seemed to have continued effectiveness. These kinds of programmes were also recommended in Sunstein and Thaler’s “Nudge”.

It also depends a lot on what your effectiveness measure is. Suppose that you observe that, when we give people a lot of information about the number of calories in different items at a fast food restaurant, they don’t change their consumption much. An economist might then conclude that it’s less likely that “lack of information” were driving consumption choices and would reckon it more likely that the observed consumption decisions reflected reasonable consumer preferences. A public health person might conclude that the programme failed and that stronger measures were needed.

Interestingly, recent work also suggests a reasonable turnaround in Americans’ food consumption behaviours, and especially away from calories-from-beverages, chalking it up to public health efforts.

Prof Connor believes if New Zealand is to reduce the harm done by alcohol then it needs regulations to rein in the alcohol industry – things like a reduction in the number of pubs and earlier closing times for on-licences.

”There is plenty of good evidence that if you close on-licences, pubs and stuff, earlier, you have less crime.”

Boy, I wish that these kinds of articles would link to sources. I can’t fault Connor for that though. You have to be awfully careful in work looking at pub locations and crime. Pubs want to locate where there’s reasonable night-life; those places would attract crime even absent the pub. And, if pubs are closing because nightlife’s moved on to other venues, you could get reverse causality. But I’ve not yet looked closely at this literature.

This one, I know about. And Connor’s dead wrong. Alcohol demand is relatively price insensitive. What price sensitivity there is mostly comes from light-to-moderate drinkers. Heavy drinkers don’t much respond to price measures; binge drinking doesn’t much respond to price measures. If you raised petrol excise to $50/litre, you’d probably cut down on drag racing, but you’d devastate normal commuting. This is the kind of policy Connor here is proposing, and that she doesn’t think costs very much. If you count the harms done to moderate consumers, it costs a lot.

Prof Connor believes the generation that liberalised alcohol laws has let the country’s young people down.

”The chronic heavy drinkers are all older. These are the people young people are learning from. They see it’s OK to drink large quantities of alcohol.

…”When you liberalise the law, people just drink more. They drink heavily and in a very messy way.”

While I agree that the baby boomers have a lot to answer for, especially around housing market regulation, it is simply wrong to suggest that liberalisation of the alcohol laws made things worse here. A chart from a few years ago, originally from Kiwiblog: 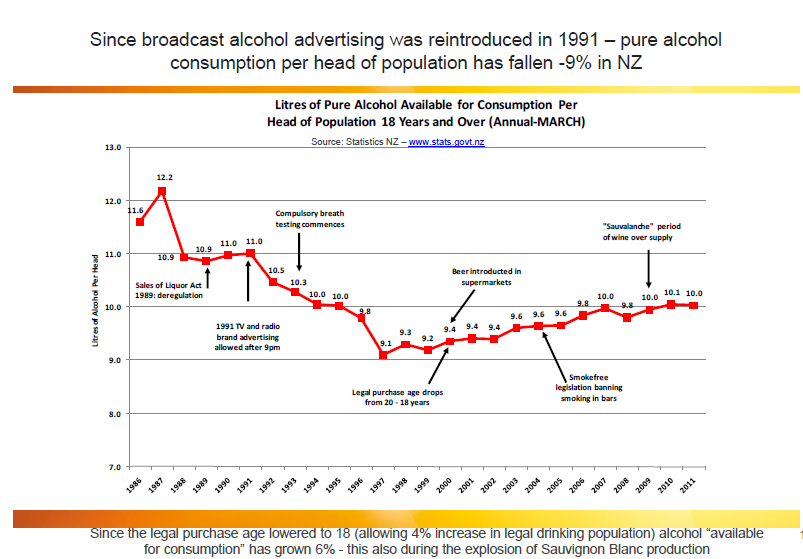 There was a sharp increase in total alcohol consumption per capita from 1970 through the early 1980s, then a sharp drop from 1985 through the late 1990s, and a pretty stagnant trend since then. I expect that much of the rise from 1970 through 1985 was women catching up to men’s drinking habits. Darned hard to see any negative effect of alcohol liberalisation in the aggregate consumption data. And most other “bad stuff” trends seem to be dropping too. The drop in the alcohol purchase age from 20 to 18 didn’t worsen anything of consequence either.

And I worry about the continued denigration of supermarket alcohol availability. A lot of craft brewers would have a much harder time getting product out to consumers were it not for friendly stockists at the local New World and Fresh Choice supermarkets.

I agree with Connor on one bit, though. She says that you shouldn’t let your kids see you drunk. I agree. It’s one of the reasons we bring the kids with us to the University Staff Club every Friday night. They there can see, regularly, how decent people interact with alcohol: moderate normal social consumption among friends, with kids running around and playing in the gardens. I hope that they grow up to follow that example.