League tables are always fascinating, and I came across a rather suggestive one in the January 11 issue of the Economist, in an article, ‘Setting out the store’, which was making the case for governments to sell off more of their assets.
The Economist didn’t give the exact source for its cross-country comparisons (just citing “an IMF paper”) but I’ve tracked it down and here’s the data from the original source (Another Look at Governments’ Balance Sheets: The Role of Nonfinancial Assets). It shows the amount of government-owned (central and local government) non-financial assets (everything from land and sub-soil assets through buildings, roads, and infrastructure, through to non-tangibles like software and films), as a percent of GDP. 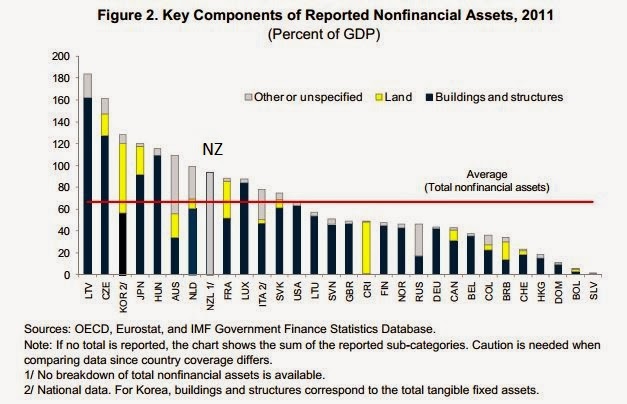 This is an area where cross-country comparisons (as the authors stress) are fraught, due to assorted and significant data problems, but even so I think it’s fair to ask why we seem to have a relatively high share of our resources tied up in state-owned non-financial assets.
The data we supply to the international statistical agencies don’t help a lot with the answer, as they aren’t split out into categories like dwellings or structures (which is why we are a grey bar in the chart above), so you can’t tell, for example, whether we have an unusually high stock of government-owned housing or an unusually large set of roads. The only split we provide is between central and local government, shown below compared with other countries that also provide the same split. 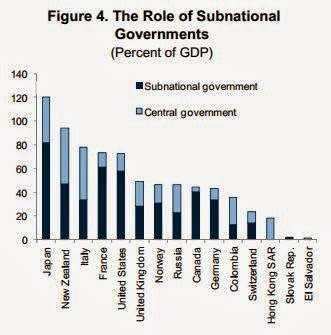 There’s clearly a big chunk of local authority assets in our total. That’s not unusual: as the authors note (p10), “On average, subnational governments hold more than one-half of total nonfinancial assets. The share of regional and local governments is particularly high in federal states”.
But it does leave you wondering. To date, our privatizations – asset sales, whatever – have been at central government level. But you’d begin to wonder if local authorities aren’t similarly sitting on superfluous assets that could also be sold off.

0 Responses to “Why are we where we are on this league table?”