I’ve been bothered for a while about the way we have a reasonably high (2.9%), and rising, inflation rate when you look at price rises in the domestic non-tradable part of the economy. And it’s going to get worse, with the economy continuing to strengthen: as you can see in the graph below (from the RBNZ’s December Monetary Policy Statement), the RB has non-tradables inflation rising steadily over the next while to close to 4%. 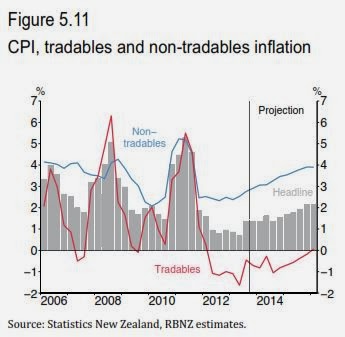 What I didn’t appreciate, until I read the latest Australian Monetary Policy Statement, was that the Aussies have got an even bigger issue than we have. Here’s a table with their latest numbers (circled), and a couple of graphs. 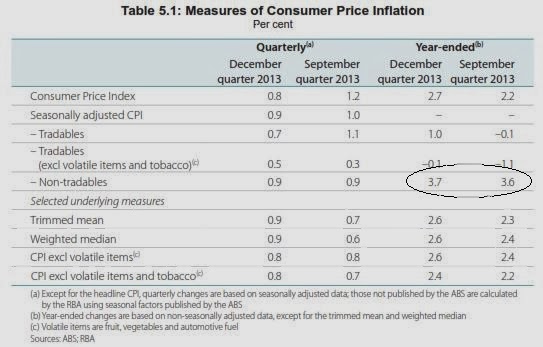 Their non-tradables inflation rate is 3.7% – higher than our 2.9%, and in a cyclically weaker environment than ours (we have faster GDP growth, faster employment growth, an unemployment rate that’s heading below theirs, and house prices rising at a faster clip). The RBA rightly says that “it is somewhat surprising that non-tradables price inflation has not eased given that growth in labour costs has been weak in recent quarters”.
The RBA had a bit of a closer look at where this stubborn non-tradables inflation has been coming from, in these two graphs. 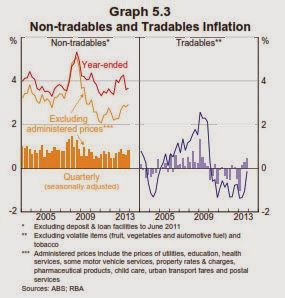 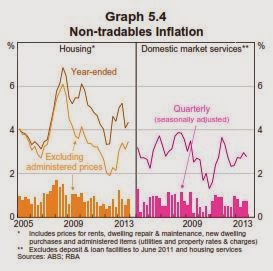 The top chart shows the stubbornly high level of non-tradables inflation (roughly 4% a year over the past decade), compared with the more volatile but generally much lower tradables inflation.  It also shows, in the left panel, that what they call “administered” prices – which is, I take it, a euphemism with prices you’re lumbered with on effectively a no-choice basis – have been helping keep non-tradables inflation high.
The bottom chart splits out housing-related non-tradables inflation and inflation in domestic services markets. Again, the left panel shows that housing-related “administered” prices have been making things worse. And the right panel shows that, even if some of the current non-tradables inflation can be traced back to more expensive housing, the rest of the non-tradables economy has generally been chugging along at about a 3% inflation rate, year in and year out, only briefly interrupted by the GFC.
I’m left with three thoughts.
One is that there could be a mistaken degree of complacency about the inflation outlook in both Australia and New Zealand. There’s a stubborn core of domestic inflation that doesn’t appear to have been squeezed out even (in our case) after two decades of inflation-targetting (the Aussies came later to the inflation targetting game). There’s often criticism of central banks for being spooked by inflation that mightn’t actually be there – on this showing, it could well be lurking.
Two, persistent non-tradables inflation leaves you asking whether extensive microeconomic reform in both countries has actually succeeded in budging some behaviours. Have we still got a core of unreconstructed, inflexible sectors?
And three, I look at that contribution from “administered” prices (and I’d bet the same would be true here in NZ) and wonder why it is that the prices of “utilities, education, health services, some motor vehicle services, property rates & charges, pharmaceutical products, child care, urban transport fares and postal services” can simply be announced on high for consumers to have to swallow. I said the other day that our Productivity Commission had made a jolly good case for the economy-wide benefits of greater services competition: here’s another reason why it would be a good idea.