Yesterday Stats came out with the latest productivity statistics. They’re very important numbers: in the long run, it’s productivity that largely determines our standard of living, and if you’ve ever engaged, or want to engage, with why incomes here seem to have slipped compared to the OECD as a whole, or compared to Australia, then you need to start out armed with the basic info on what’s actually been happening here.
Here are some of the key findings, taken from the full Stats release. And if you’d like someone else’s coverage as well, Patrick Smellie at the NBR did a piece (outside the paywall) which quotes the ANZ’s chief economist Cameron Bagrie.
Here’s a table of the overall picture. 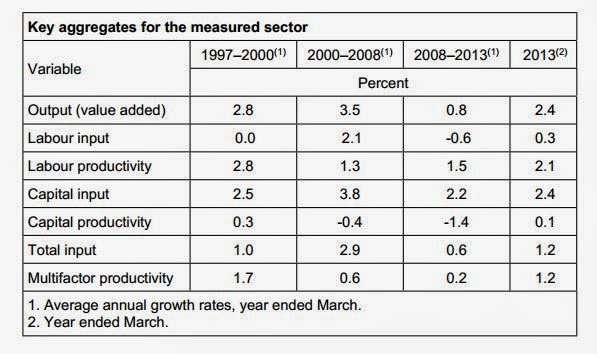 Two explanatory comments. You’ll see that these are numbers for “the measured sector”, which is where it is easier for Stats to measure productivity. The missing bits are central government, education, and health, where measuring productivity is iffier (though not impossible), but even so the “measured sector” covers quite a big slab of the economy (about 80%). And those time periods, which look a bit arbitrary at first, are based on the idea that you ideally need to measure productivity from one point in one business cycle to the same point in the next business cycle. Productivity numbers can get badly thrown off if, for example, you went to measure from peak of boom to bottom of bust (or vice versa). The latest cycle (2008-13), incidentally, is still underway, so we’re far from the last word on what’s happened this time round.
So, what’s been happening?
First, output growth per annum (0.8%) in this latest cycle is low, but that’s because we’ve got the GFC in there (output -3.0% in the year to March ’09, -0.4% in the year to March ’10), and anyway it’s accelerating since. The year to March ’13 was good, the year to March ’14 will have been better, and it’s highly likely that the year to March ’15 will be even stronger again.
Second, the GFC and its aftermath were not kind to employment and hours worked, so the quantum of labour input has actually fallen over the period (largely due to a contraction by -2.4% in the year to March ’10). This will obviously change as we add on more recent data.
Third, growing output (however slowly) but falling labour input means that labour productivity went up. Obviously we’d all prefer if we got higher labour productivity by labour input going up quite a bit and output growth growing even faster, but there we are. These were difficult times, and the good news is that labour productivity increased by 1.5% a year, about the same as our longer-term average (1.6% a year over 1996-2013). Not a bad outcome on the back of one of the most difficult business cycles in living memory.
If you rearrange a formula a bit, you can get an insight into where this increased labour productivity came from. It can come from each person working with more capital equipment (“capital deepening”), or from something else (“multifactor productivity”, MFP, which is shorthand for everything that isn’t more labour input or more capital input, and includes everything from technological and process innovation to better management and learning by doing). Here’s the outcome. 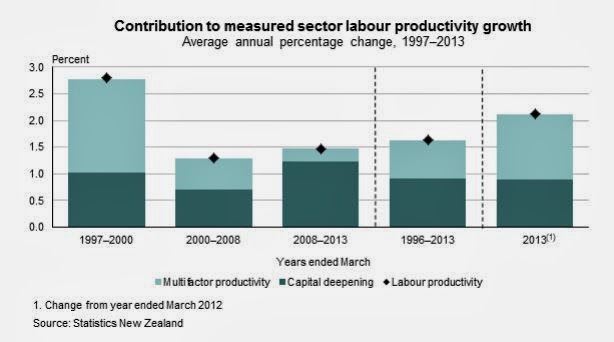 You’ll see that this time round (or at least up to March ’13) people have been able to produce more largely because they have had more gear and equipment to work with. The good news is that the capital spend has kept up. The bad news is that usually we get more of a productivity kicker from all that “everything else” MFP stuff, and that hasn’t kicked in to date in this cycle. But as you can see, 2013 showed more of a MFP boost, and hopefully we’ll see more again this year and next.
We don’t need to spend all our time comparing ourselves with the Aussies, but it’s an interesting exercise all the same. Here are the numbers. 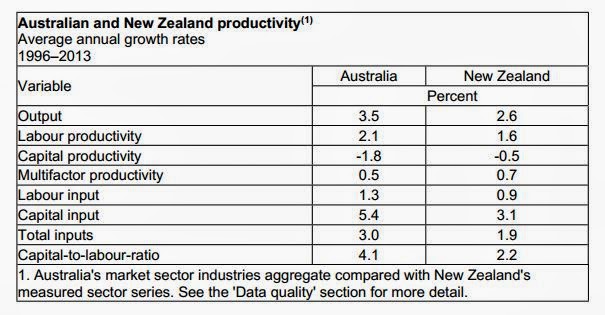 You’d be tempted to conclude that the reason for the gaps in output growth and labour productivity growth, in Australia’s favour, are all down to the benefit that the Australian workforce gets from bigger increases in the capital equipment they’ve got to work with.
That’s actually a bit of a statistical illusion. It’s true that the capital deepening component of the gap between our output and productivity performance is growing, yes. But it’s still a smaller component than the MFP contribution. Geoff Mason of the UK’s NIESR has done the comparative exercise in detail (I covered it here, a short form of his results is here and the whole thing is here), and broadly speaking 60% of the productivity difference is down to better and more inventive ways of organising their affairs in Australia (MFP) and 40% is down to the Aussies having more gear to deploy (there’s also a small difference in aggregate skill levels, which I’ve ignored).
A lot of this will be of greatest interest to hard core macroeconomics types, but I think there’s also an important lesson for management everywhere lurking in these numbers, and it’s this.
On average, the measured sector has been able to generate MFP growth of 0.7% a year over 1996-2013: in other words, without hiring a single extra employee or installing a single extra machine, organisations have been able to produce 0.7% more each year with the same resources. I’d like to see that number being used. It ought to be built into people’s performance targets and business units’ business plans – and public service budgets, if it comes to that.