The Greens’ Julie Anne Genter provides some helpful comments on the cost-benefit assessment cited in their cycling proposal.

This is going to be an incomplete answer and I can’t promise to get fully immersed in a lengthy debate. Short answer: we used the figure in the study – which is peer reviewed, published and was the subject of a PhD thesis. It’s a big research project, we could not replicate it with our limited resources. They made the decision not to discount (as I understand it) because of many of the benefits are health and longevity related, and arguably society values health in the future as much as they value health today. This is a debatable point (that most people are unlikely to be very interested in), and while not intending to take a specific position on it, we went ahead used the study because it was highly relevant to our proposal.

I sure wouldn’t have expected the Greens to come up with their own full C-B on this one. But it was pretty obvious that the paper’s authors had decided to eschew discounting; that made the figures incomparable with other LTNZ projects. Further, plenty of other roading project cost-benefit analyses build in health and value-of-life benefits from reduced accidents which also accrue over a longer time period. We then can’t really say that the policy would take money from lower-valued projects and move it into this higher-valued one, since the basis for evaluating value differed too much across them.

Longer answer: Benefit cost analysis is in theory used to compare and prioritise projects (though it is not at the moment in NZ). I accept that it may not seem fair to compare the BCR of motorway projects that have used a discount rate with this number which has not discounted benefits. However, the vast majority of the benefits (about 80%) in the motorway BCRs are “time travel savings” (which incidentally are unlikely to measure anything in reality. See Metz, Myth of Time Travel Savings). Let’s be generous and assume time travel savings did exist; one could argue that a high discount rate is more likely to apply (you value a savings of 5 minutes today more than in 20 years time) than to health benefits. Moreover, motorway evaluations do not take into account sufficiently the impact of induced traffic, which erodes time travel savings quickly in peri-urban areas. So although that is not the purpose of discounting the benefits, I think it probably gives us a more realistic picture of the relative benefits/impact of the project over time. It’s hard to see how walking/cycling infrastructure benefits would decline over time in the same way.

I agree with much of this. But surely then the correct answer is to run it using standard time discounting, get a smaller but defensible number, and then point out that the benefits of other projects are overestimated. It wouldn’t surprise me if the benefits for other roading projects were overstated. And even if the cost-benefit analysis were right, there are plenty of relatively low benefit-to-cost ratio projects out there; NZTA put the whole of the Roads of National Significance programme at a 1.8:1 benefit-to-cost ratio. I wouldn’t be surprised if a sound version of the cycling benefit-cost study beat 1.8. Why say 20:1 when you only need to beat 1.8:1?

Having studied at length the economic evaluation manual, I can say economic evaluation of road transport projects is highly incomplete (and therefore inaccurate) in NZ, and having looked at alternative methods of evaluation, I think it’s quite safe to say that the cost effectiveness of walking and cycling for short trips is easily in the magnitude of 20 times better value for money than a project that introduces new road capacity (if not more). The straight up public infrastructure cost required to move one person one kilometer in a car is at least 8 times greater than by bicycle, but that doesn’t include the private ownership and running costs of the car, and the parking, which would double that again. We haven’t even started talking about externalities like congestion, noise, pollution, crash risk and public health.

Julie Anne knows more about transport than I do, and I believe her to be a truth-seeker. I will make a couple of points here though.

It’s entirely possible for it to simultaneously be true that the public infrastructure cost of roading is higher than for cycling, and for it to make sense to invest in roading.

For some people, cycling’s a great way of commuting. For others, not so much. Our family carpools together across town every day. Cycling wouldn’t work well for us. I’m happy to pay more in terms of petrol (including excise), car maintenance, parking, and everything else, than to cycle that route every day. And especially since we get random-draw unpredicted rain. If you asked me, “Hey, Eric, how much would we have to pay you to use a bicycle for your commute every day with the kids,” I would tell you that you would have to pay me about $30,000 per year to make me consider it. It would substantially reduce my quality of life. I imagine the horror of getting a call from daycare that the 3 year old had come down with a stomach flu, was vomiting, and that I’d have to take her home…by bicycle. With the 6 year old tailing along behind on his bicycle because there’s no way I’d have a 6 year old cycle from Ilam to Brighton on his own. Because of all that, I’m real happy to pay the costs of driving a car rather than cycling. Further, the time in the car isn’t pure loss either: we play games with the kids (traffic permitting) or listen to audiobooks – we’re half-way through Robinson Crusoe currently. They’ll be getting much of the Canon courtesy of the commute. That counts for something.

Let’s consider how the model the cited paper uses handles this problem. Think about the person currently on the margin between cycling and driving who currently drives. She’s weighed up all of the costs of driving, all of the health benefits of cycling, and just barely prefers driving. Now suppose we made cycling easier and, because of where she lives, she now just barely favours cycling. The benefits to her of the programme should really be pretty close to zero: she just barely preferred driving before, and just barely prefers cycling now. But the simulation model would count as benefits to her all of the net reduction in health costs (reduced driving accident risk, plus bicycle accident risk, minus health benefits from exercise) and all of her reduced fuel expenditures, without counting any of the costs of the switch as she perceives it. No costs of cycling, no inconvenience in the rain, no hassles in trying to get groceries home in a mixed-purpose trip, no increased food expenditures to fuel the cycling, no time costs for her longer cycling commute.

I don’t feel I’ve even begun to get into the logic and evidence to back up all these musings, it probably could itself be a good thesis topic.

Ok. Here’s the cost and benefit time profile on the Roads of National Significance project. 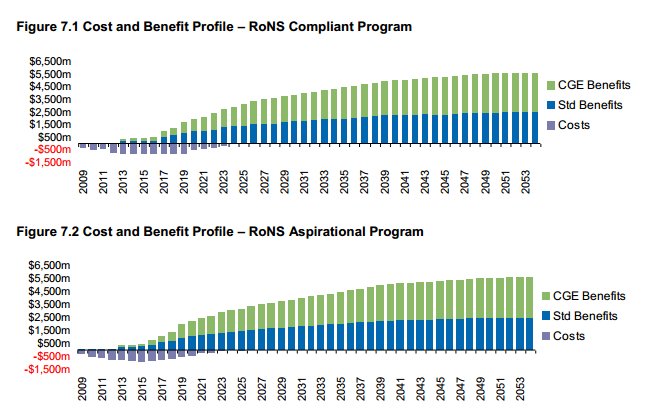 Suppose that all the real benefits are only half of what’s here presented, just for sake of argument. Even with that, what do you suppose that a zero discount rate would do for the cost-benefit assessment of RONS? The benefits from the RONS programme are heavily backloaded while the costs are frontloaded. Time discounting doesn’t just affect bicycling projects with later health benefits.
And the tabulated RONS benefits aren’t just commuting time savings: they’ve got reduced congestion (and associated costs), accident reductions (health benefits), and vehicle operating costs savings. The green curve adds in a bunch of wider economic effects. They’d reckoned on $690m per annum in non-market benefits like lives saved; it isn’t all “saving 5 minutes a day in RONS versus saving lives in cycling projects.”
I’m not going to go to bat defending RONS or the cost-benefit study on it: I know there’s been plenty of criticism of it. But if the general point is that time-discounting isn’t fair for projects like cycling infrastruture that have lots of potential future health benefits, well, the “front-loaded costs, later benefits” profile also fits RONS.
Again: it seems completely plausible to me that, if government is going to be devoting general revenues to roading projects rather than just petrol excise revenues, it could well make sense for central government to use some of that funding to top up local government expenditures on cycle paths instead. But my confidence in the proposition is reduced rather than enhanced by that Auckland study.
Finally, I worry a lot about differential cost-benefit methods being used across different kinds of projects. Suppose Genter’s right and that health benefits should attract a zero discount rate rather than a standard one. We’re currently applying standard discount rates on every other project out there: investments in new hospitals, various public health interventions, pretty much everything. We don’t get formal cost-benefit analyses on every policy, but big ones do require an RIS that has to at least have indications of net present value. And the RIA Handbook under which the Ministries are supposed to be producing these things explicitly cites the Treasury cost-benefit analysis primer as guidance. If we’re going to discount health benefits at zero, it’s a dumb idea to apply it piecemeal. Get it into the Treasury guidelines. Otherwise, you risk massively privileging those health projects that get the zero discount rate over ones that don’t.
I’d argue pretty strongly against a zero discount rate for health: it’s pretty strongly contrary to observed behaviour. But if you’re going to do it, it has to be an across-the-board decision put formally into the Treasury guidelines, not something pulled out to weight the scales for favoured projects.