One of the strangest things about basic microeconomics is that we write demand curves in the form,
q=D(p)that is, quantity demanded is a function of price,

but we draw them in the form, 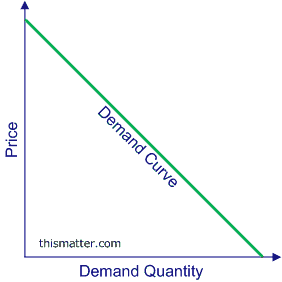 The diagram is wrong, as any mathematician will tell you, since given the way the function is written, quantity demanded should be on the vertical axis.

This oddity I always thought was due to Alfred Marshall, which I found a bit odd since Marshall was trained as a mathematician and thus would know perfectly well how to graph a function.

But now I have, belatedly, discovered that Marshall may not be to blame for starting this habit of drawing after all.

In an essay “The influence of German economics on the work of Menger and Marshall” Eric W. Streissler writes,

The “peculiar curve” is Rau’s demand curve, which is published in his later (not earlier) editions-to be more precise, from the fourth edition of 1841 onwards. Cournot has presented the first demand curve in the history of economics in 1838; Rau’s was the second, only three years later. But Cournot posits his curve without explanation, i.e., quasi-axiomatically, Rau presents a derivation of it, the typical German derivation: individuals differ in their preferences or, more precisely, in their willingness and ability to pay. (His curve assumes each individual buying one unit of a commodity, the typical case for reservation analysis and thus for “price bounds.”) But what is more interesting in relation to Marshall: Rau’s demand curve alone is drawn exactly like Marshall’s, with price on the vertical axis; Cournot’s (or Mangoldt’s) demand curves are drawn the other way round with prices measured horizontally.(Emphasis added)