I was re-reading Charles Wheelan’s excellent Naked Economics: Undressing the Dismal Science – one of the best books I know for explaining to non-specialists what economics is all about, as well as being a good reminder to those in the trade that you can actually write professionally about economics in accessible and entertaining English – when I came across this (on p232, in the chapter on the Federal Reserve and monetary policy):

Massive inflation distorts the economy massively…Fixed-rate loans become impossible…Even today, it is not possible to get a thirty-year fixed mortgage in much of Latin America because of fears that inflation will come roaring back.

And then I thought, hang on a sec, you can’t get thirty-year fixed rate mortgages in New Zealand either. Nor twenty, nor ten: five years fixed looks to be as far as it goes, as you can see (for example) in the mortgage rates quoted at Good Returns. And it’s not just mortgages that are relatively short term: our government bond market stops at 10 years, when many other countries’ go for far longer. Here’s a table I collated (from the useful data on government bonds at Investing.com) showing the longest conventional (i.e. fixed coupon, not inflation-indexed) government bond in most of the usual comparator suspects.

No doubt about it – we’re right down the short end with a maximum bond maturity of 10 years. So what’s going on? Why can’t someone in New Zealand do what people can routinely do in the US – get a 30 year fixed rate mortgage (current rate 4.5%), or buy a 30 year Treasury bond (current yield 3.6%)? Or if 30 years sounds a bit outlandish, a 15 year fixed rate mortgage (it costs 3.5%)? Do we have some kind of fear of resurgent inflation that is preventing the development of markets in long duration assets and liabilities?
Interestingly, we do have a long-maturity market in one kind of government bond. In recent years the government has issued 12-year, 13-year and 17-year inflation-indexed bonds, where the capital value gets adjusted for movements in the CPI. They’ve been quite popular, with an issued face value of $9.75 billion, and in recent bond tenders they’ve been bid for pretty solidly. But that kind of makes the same point again – we’re only prepared to buy long-dated assets with explicit inflation protection. We don’t look at all happy to incur, or offer, longer term uninsured interest rate risk, though it’s perfectly common behaviour elsewhere.

At least one side, and maybe both sides, of really long-term borrowing or lending transactions don’t look prepared to strike a deal in New Zealand. Why is that? Is it, as Wheelan noted about Latin America, a subliminal fear of Muldoon-style inflation returning?
Among financial market professionals, there doesn’t seem to be much of a concern. The AON Hewitt survey of economists asks for their expectations of inflation seven years out (shown below), which is the longest forecast of inflation that I’m aware of: the numbers in bold are the latest reading, the italics the previous survey’s. It gives the All Clear. But it’s a very small sample of insiders, and it’s the general public’s perceptions that matter more.

We do have some evidence that the citizenry as a whole aren’t as relaxed. The Reserve Bank tracks households’ expectations of inflation, and in the chart below I’ve shown what people believe inflation to be, what it actually is, and households’ expectations of inflation one year ahead and five years ahead (the furthest looking measure, surveyed since December ’08). I’ve used the median measure from the survey results. 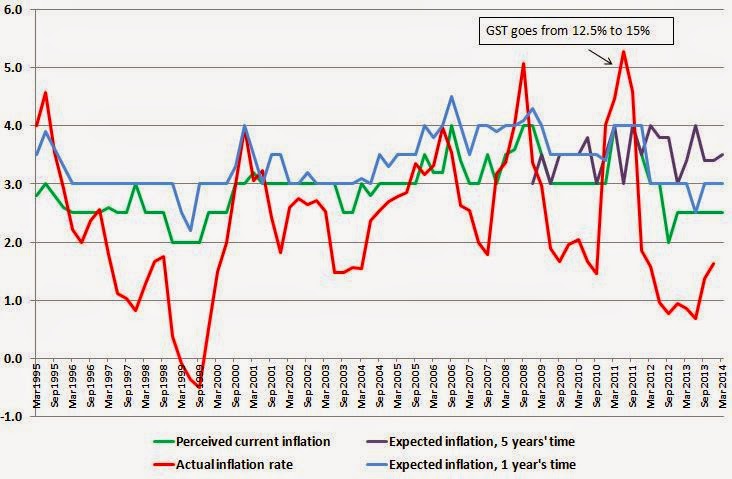 This may be typical of households everywhere, and not just in New Zealand, but even so it’s kind of disquieting. As a summary, households generally believe inflation is higher than it actually is (a perceived 2.9% over the period, versus the actual 2.3%), and they expect it to be higher in a year’s time (by 0.5% on average, with an expected 3.4%). And the five year inflation rate says much the same thing – on average people expect the long-term inflation rate to be 3.5%. Both the one year and five year forecasts are above the top of RBNZ’s inflation target band. Even if you knock off 0.6% as some kind of inherent subjective over-reading of what inflation has been, you still get to the point where people apparently believe inflation is always going to be very close to the top of the RBNZ’s target band. And this after over a decade of generally successful inflation targetting.

I’m not too sure where all this leads to in its implications for monetary policy or the development of the capital markets, other than to the obvious and well-known conclusion that inflation-fighting credibility takes forever to accumulate, but can die overnight. I do wonder, though, about our short electoral cycle: every three years, we get one political group or other threatening to change the inflation targetting regime. Baldrick couldn’t have improved on it as a Cunning Plan to undermine stable inflationary expectations.

0 Responses to “Why can’t you get a 30 year fixed rate mortgage?”