There was the usual argy bargy over the past day or two when the latest Treasury numbers showed that tax revenues in the eight months to end February were lower than anticipated. Opposition folks used it to beat Bill English about the head  (one sample from Labour’s David Parker here) and even Bill himself gave the issue some legs when he said that lower than expected tax would mean ongoing discipline over spending.

I couldn’t see any real issue issue, myself. Every man and his dog knows that the economy, currently, is a good deal stronger than anyone was picking when the original tax forecasts were made, and there’s a very high probability that any tax shortfall will be made up. Which is pretty much what the government’s chief accounting honcho said in the media release – “it is anticipated that a stronger outlook for the economy will further boost tax revenues from their current position, largely offsetting the current weakness in revenue outturns”.

If you really wanted to know how well we’re managing our fiscal position, though, a much better guide came out yesterday, and it was the IMF’s latest Fiscal Monitor (press release here, whole thing here).

Here’s one interesting graph (it’s part of Figure 1.1  in the Monitor). It’s not the most immediately obvious graph to read, but what it is showing is this: it measures how countries’ 2013 and 2014 primary fiscal balances are now looking, compared to what they looked like being when the previous Fiscal Monitor was published last October (primary balances are the fiscal balances less net interest, which among other things give you a better picture of what’s happening to the fiscal levers you can actually pull). The higher up on the graph a country is, the more the 2014 fiscal position is turning out better than previously thought, and the further right a country is, the better 2103 turned out compared to what looked likely last October. Ideally you want to be in the north-east quadrant. The numbers are percentages of GDP. 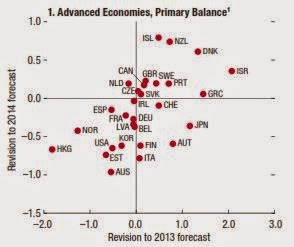 Et voilà – there we are, well dug into the north-east quadrant. There isn’t the slightest backing, in short, for suggesting that things are going worse than expected. Quite the reverse: most countries have seen either 2013 or 2014 turn out worse than expected (note Australia’s significantly worse than expected 2014 outlook), but we’re among the virtuous (or lucky) minority that haven’t.

This logically means that our government debt hasn’t risen as much as originally thought, either, and you can see it happening in this graph (also part of Figure 1.1). This is the same style thing (how did 2013 and 2014 evolve compare to earlier predictions), and this time you want to be in the south-west quadrant where debt is lower than expected in both years. As indeed we are. 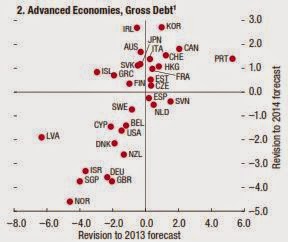 There’s a huge amount of interesting analysis and data in this publication – too much to readily reproduce here, so I’ve made a quick digest of some of the forecast fiscal and debt numbers for us, the Aussies, and the advanced economies as a group. Here it is (it’s from Statistical Tables 2 and 4 at the back of the Monitor. The forecasts in the Tables go out to 2019 but I reckon the numbers are getting a bit iffy that far out, so I’ve truncated the forecasts to 2017). 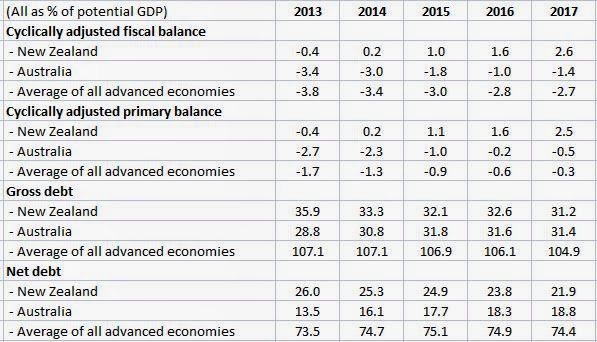 It’s a pretty good picture, isn’t it? The two numbers I’d pay most attention to – the cyclically adjusted primary balance, and the net debt – are unequivocally heading in the right direction (so are the other two, if it comes to that), and are much better than the developed economy average. So next time there’s a beat-up over whether a couple of months’ tax revenues have fallen short, remember the big picture: in absolute and relative terms, we’re actually one of the world’s better fiscal performers.

Always assuming, of course, that something broadly like our current fiscal reconstruction policies remains in place, and that another GFC-style event doesn’t loom out of the blue.

Incidentally, while I’m on the subject of the IMF, did you know that the IMF had a blog? Me neither, but now that I’ve found it, I can see that it is an interesting guide to the hotter issues in international macroeconomics, so I’ve added it to my list of “The latest from these interesting blogs”.