An Eleanor by any other name might be as smart, but would have worse odds of winding up at Oxford. A snippet from Greg Clark’s work on names and surnames:* 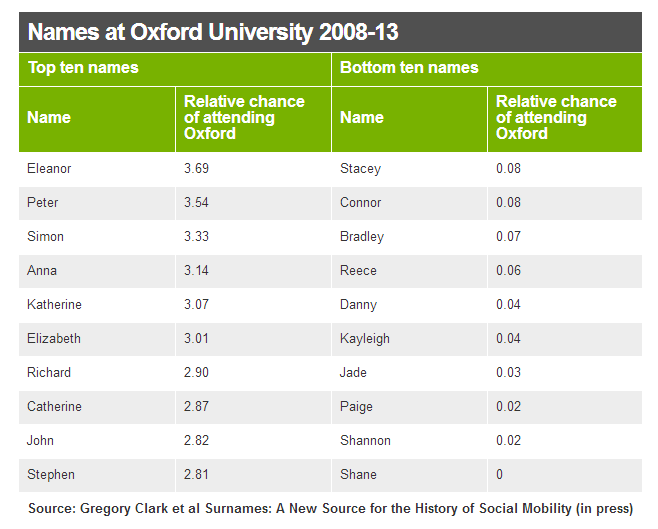 However, there is no evidence that it’s the names causing such a marked discrepancy, rather than other factors they represent, Clark says. Different names are popular among different social classes, and these groups have different opportunities and goals.

“That’s something that’s emerged in modern England that didn’t exist around 1800,” he says. When he re-ran his study, but this time looking at students attending Oxford and Cambridge in the early 19th Century, he found the correlation between names and university attendance far less marked. First names simply weren’t the social signifiers they are now.

What’s happened since then is a move towards unusual, even unique, names. Before 1800, Clark says, four first names referred to half of all English men. In 2012, according to the Office for National Statistics, the top four names (Harry, Oliver, Jack, Charlie) accounted for just 7% of English baby boys (and the picture was much the same in Wales).

As late as the 18th Century, it wasn’t uncommon for parents to call multiple children the same name – two Johns for different grandfathers, for example. Now parents increasingly look for unique names or spellings of names. As Jean Twenge points out in her book the Narcissism Epidemic, Jasmine now rubs shoulders in naming lists with Jazmine, Jazmyne, Jazzmin, Jazzmine, Jasmina, Jazmyn, Jasmin, and Jasmyn.

Our baby-naming algorithm, which wound up choosing Eleanor for our girl, started with a domain of names in the top 1000 from 1880 to 1930 in the US, then eliminated any names that were in the top-100 any time in the last three decades. So you rule out the made up stuff while also ruling out having too many classmates with the same name. But we’re the kind of people who would choose that kind of algorithm.

I especially liked the BBC piece’s pointing to Figlio’s work on names. It’s pretty common for researchers to use audit studies to test for racial discrimination: they send out otherwise-equivalent vitae, but put a ‘black-sounding’ name on some and a neutral one on others. They tend to find a penalty for having a black-sounding name. The problem with these kinds of studies is that they simultaneously test for black-sounding and for class-linked names: instead of testing black versus white, they’re effectively testing lower-class versus upper-class names. Here’s Figlio:

This paper investigates the question of whether teachers treat children differentially on the basis of factors other than observed ability, and whether this differential treatment in turn translates into differences in student outcomes. I suggest that teachers may use a child’s name as a signal of unobserved parental contributions to that child’s education, and expect less from children with names that “sound” like they were given by uneducated parents. These names, empirically, are given most frequently by Blacks, but they are also given by White and Hispanic parents as well. I utilize a detailed dataset from a large Florida school district to directly test the hypothesis that teachers and school administrators expect less on average of children with names associated with low socio-economic status, and these diminished expectations in turn lead to reduced student cognitive performance. Comparing pairs of siblings, I find that teachers tend to treat children differently depending on their names, and that these same patterns apparently translate into large differences in test scores.

I wish that audit studies instead used a cross-cutting method that would test Da’Quan against Dwayne and Cleetus instead of just against Peter. Put it into a 2×2 matrix with race on one axis and class on the other.

First names may just be signals, but “just signalling” hardly means unimportant. If you’re economising on time while going through the resumes or university applications, and if a Cleetus is less likely than a Peter to know which fork to use at the important dinner with a client or donor, well, a Cleetus would have to be better than a Peter to get a second look. Because parents who have some minimal social capital expect this to be at least somewhat likely to be true, they make different naming choices than those who don’t.

The parents who need Crampton’s naming algorithm most will give up long before they hit “Borda count”.
— Colby Cosh (@colbycosh) April 14, 2014

I’d tell you to avoid giving your kids dumb names, but if you’re reading this, you almost certainly already know it.

* I really need to get his book. The interview teasers have been very tempting.