I spent last Thursday at the latest seminar run by Auckland University’s Retirement Policy and Research Centre (the RPRC), “Retirement incomes policy: The future is now” (overview here, full programme here). The Centre also prepared a ‘Summary of issues’ background paper which gives a quick overview of our current system, the policy positions of the political parties, and the issues that look to be live ones.

I came away with the overall impression that there isn’t a lot wrong with our current arrangements, and there is quite a lot right.

As it happens (and I didn’t know because I hadn’t got round to reading it yet), that’s what the latest three-year review of retirement incomes policies from the Retirement Commissioner also said (page 6): “New Zealand has an excellent retirement income framework which achieves good outcomes for the majority of people aged 65 and over. Rates of poverty are relatively low for this group, thanks to a combination of New Zealand Superannuation (NZS), high levels of home ownership and a raft of other government policies and programmes”. It’s not perfect, and there are some challenges – “there are signs that in the near future outcomes may be more unevenly spread, with some people arriving at retirement in poor financial shape while others continue to do well” – but overall it’s in good shape, and we even heard evidence from some of the seminar speakers that other countries are looking to aspects of our system to improve their own.

But that’s probably not the view of the citizen in the street (it may not be yours, either). I’d guess that there is a perception that the greying of the population could be putting demographic stress on our ability to pay for national super at its current level – fewer paying into the tax-paying pot, more pensioners drawing on it – and the politicians have certainly been raising the concern levels around sustainability by saying super needs to be changed for one reason or another.
But the greying issue may not be as acute as it first appears. On the demographics, one of the most interesting presentations came from Waikato demography professor Natalie Jackson. She pointed us to some new demographic thinking about dependency ratios, which you can read for yourself in summary form as “Analysis: Population ageing: the timebomb that isn’t?” and more fully here. The central idea is that the familiar “dependency ratio” doesn’t mean so much these days, when more people are staying in the workforce for longer, and are in better shape in older age. Two demographers at the University of Edinburgh have come up with “the real elderly dependency ratio – based on the sum of men and women with a remaining life expectancy of up to 15 years divided by the number of people in employment, irrespective of age”. On that basis, many countries have actually been experiencing falling dependency ratios, and Prof Jackson showed us that New Zealand is, too.

And as Matthew Bell from Treasury showed us based on Treasury’s long term fiscal projections, it wouldn’t take much of a change to current pension arrangements (eg by progressively raising the entitlement age by some modest amount) to offset whatever demographic pressures are on the regime. It’s also worth having a quick dekko at a paper written by Michael Littlewood, co-director of the RPRC, “New Zealand Superannuation’s real costs – looking to 2060“, which has looked at the various vintages of the Treasury’s long-run projections and found that every time the cost of national super has been re-estimated, it has come out lower than previously thought, as his chart below shows. The ‘net’ cost by the way is the cost of national super less the income tax on pensions that the government gets back. 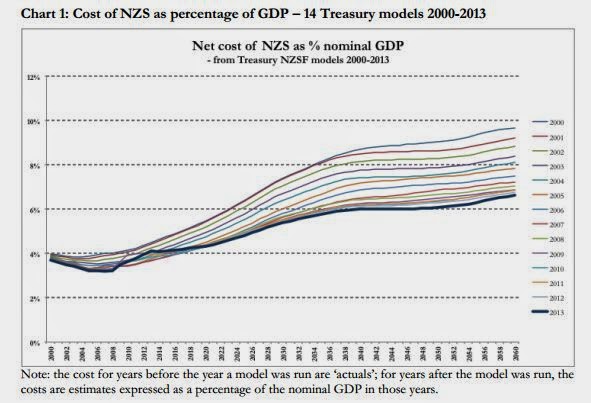 Not everything in the long-term fiscal garden is coming up rosy: the rise in the cost of super as a percentage of GDP may not be huge, but it comes at a time when other costs to the government are also rising, notably health, which on current projections rises from around 6.5% of GDP now to about 10.5% in 2060. So there may yet be some tough spending and tax decisions down the track. Overall, though, we’ve got a set of pension arrangements that looks pretty robust by world standards.