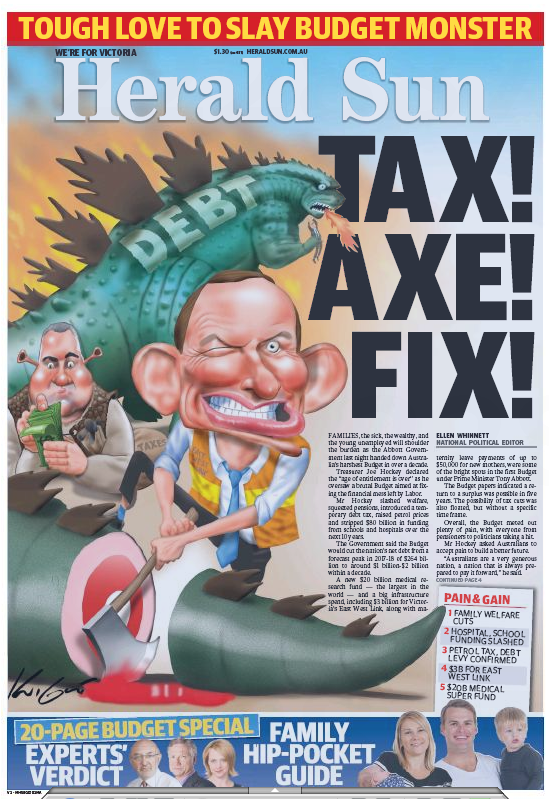 Yesterday’s Aussie Budget has naturally had huge media coverage – my favourite (pictured opposite) is this gloriously OTT, but accurate, summary from the tabloid Herald Sun – but in all the publicity there has, as usual, been far too little attention given to what I think is the most important set of numbers in the whole thing.
That’s the estimate of what is happening to Australia’s structural fiscal balance – what the fiscal balance looks like when it is shorn of good year effects (tax revenue relatively high, welfare assistance relatively low) and bad year effects (lower tax take, higher assistance spend). It’s the only way of knowing, for instance, whether politicians have spent up large in the boom times, leaving a financing problem for their successors in more normal times.
Now, I’m aware that making the structural balance calculation is, to put it charitably, an imprecise exercise, and some might even call it outright ropey. I’ve seen estimates of the underlying fiscal balance in the Eurozone economies, for example, that looked bonkers. As the Australian Treasury wallahs put it in their sobersides way, “Structural budget balance measures are sensitive to the assumptions and parameters underpinning the estimates…Due to the sensitivity of estimates to assumptions, it is best to consider a range of structural budget balance estimates based on plausible assumptions for the underlying parameters as one element of a broader assessment of fiscal sustainability”.
Health warning duly noted, here’s the structural picture for Australia (you can find it for yourself towards the bottom of this page). 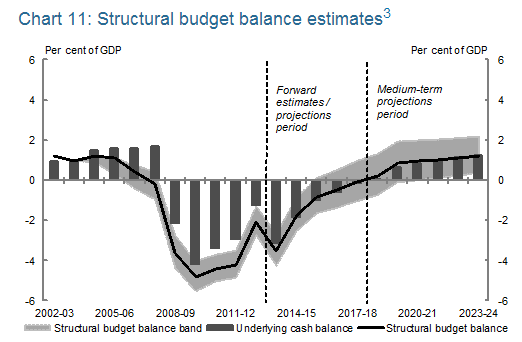 The solid line is what you’re interested in, and (as the health warning advised), there’s a range around it, with the bottom of the range corresponding to Australia’s terms of trade being around their long-term level, the top of the range corresponding to the terms of trade staying around the unusually high level of the past decade or so, and the solid line itself based on the Aussie Treasury’s forecast for the terms of trade over the next few years.
What this shows is a remarkable turnaround from the small structural surpluses of the Howard years to sizeable structural deficits in the Rudd/Gillard/Rudd years. They weren’t drunken sailor, Irish or Greek style deficits, sure, but they weren’t small potatoes, either. And you can understand some of the motivation: there’s probably some entirely appropriate countercyclical stuff thrown in there to help ride out the GFC, that would have been reversed in the fullness of time. But you’re also left with the impression that the structural balance has indeed found what it is able to detect – a government spend-up in the Aussie resource boom that was more than could be paid for in more conventional economic conditions.