It’s Budget day, and here I’m going to be concentrating on some of the more important issues that may not get the coverage they should. So I won’t be spending much time on the headline policy items, which will be well covered by mainstream media, and in any event I’m part of a communal economists’ Twitter project (look for #NZ14) which will be reporting on each item as it is announced in Bill English’s Budget speech in Parliament. If you want the breaking news and analysis on the big spending initiatives in the likes of education and health, head over to them.
I will mention, though, some smaller  individual items that rang my bell – notably money to accelerate Auckland roading projects (though I note that the ‘compared to the non-accelerated timetable’ info has been left out), the abolition of cheque duty (“a relic from a bygone age”), more money to tackle kauri dieback disease, and the temporary (and I’d argue for permanent) removal of all duties on imported building products. “Reducing the barriers to competition ensures we have a more competitive market. This reform will reduce costs for residential business construction” says my old mate from the BNZ, Commerce Minister Craig Foss, and he’s 100% correct.
Back to the big picture.
First, the economic outlook. Treasury’s forecasts look reasonable enough: they show that in the year to this June, GDP will have grown by 3.4%, and in the June ’15 year will accelerate a bit more, to 3.9%. The year to June ’16 is expected to be pretty good too, with 2.6% growth, and by March ’16 the unemployment rate is expected to be down to 5.1%. All good: the big issue is what we do for an encore after the earthquake rebuild and after (if?) world commodity prices ease off. Real GDP growth in the 2018 and 2019 years is forecast to be only 2.1-2.2%, a growth rate that will see us slipping down the OECD standard of living league tables if we don’t raise our game to something better.
Next, one of the biggest questions to ask of any Budget: how much of the headline movement in the fiscal balance is down to purely cyclical influences, and how much is the genuine underlying position? For which, as I said on Wednesday about the Aussie Budget, you need what some people call the structural balance (as the Aussies do) and what some people call the cyclically adjusted balance (as we generally do). It aims (with considerable imprecision, but never mind) to strip out those cyclical impacts. Is the $372 million fiscal surplus forecast for 2014-15 a ‘real’ surplus, or is it just an artefact of higher tax revenues in a couple of cyclically strong years?
Here’s the cyclically adjusted balance (you can find the original, and the discussion on how it’s calculated and its virtues and vices, in the ‘Additional Fiscal Indicators’ section of the ‘Additional Information’ addendum to the Budget and Economic Fiscal Update) . 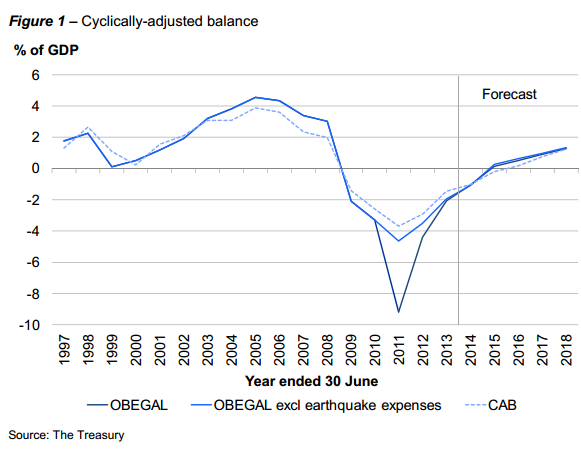 On this showing, the headline numbers and the real underlying position are not that different, so yes, you’d conclude, we’re looking at a real track towards surplus rather than smoke and mirrors artifice derived from the current business cycle. But at the same time there’s one important qualification to make. If you assumed that our terms of trade were back at their average level of the past 30 years, rather than the current situation where we are enjoying very high export prices, the surpluses vanish, as the chart below shows. 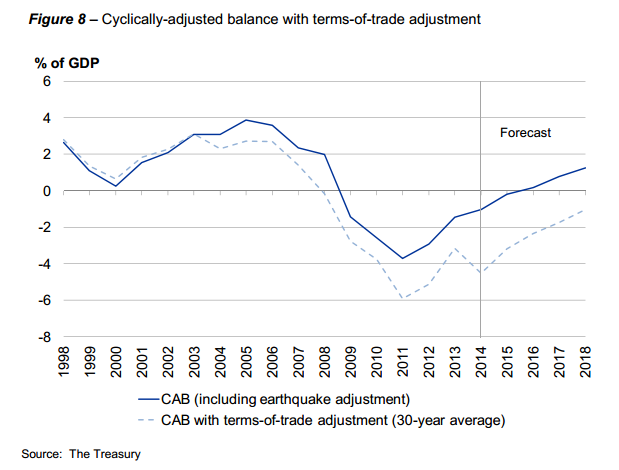 We’d be improving our position – the deficit would be falling in more normal commodity conditions – but we’d still be in deficit as far as the forecasting eye can see. Not good. Of course, demand from China (or wherever) might keep prices high for a long time, and we mightn’t see that relapse back to how things used to be. But if you assumed that there is still a degree of potential fragility to the fiscal outlook, you’d probably be right.
Before the Budget, a lot of people  wanted to know, if a surplus is on the cards, how will it be used – more spending? lower tax? lower debt? some combo? We didn’t get all the jigsaw puzzle  today, but we get some of the bigger pieces. Lower debt looks the most favoured. That’s partly because there’s a new fiscal objective: “After net debt has gone below 20 per cent of GDP, the Government intends to manage this debt within a range of 10 to 20 per cent of GDP over the economic cycle”. I gather there was some debate in officialdom over this formulation, but I’m all for it. It’s customary these days to formulate the aims of monetary policy, for example, in terms of some average target over the business cycle, and I think it makes equal sense to do the same on the fiscal policy front.
There was  some increase in spending (an extra $1.5 billion contingency for the 2014-15 year, $500 million more than in 2013-14, and rising by 2% a year thereafter), but not a lot of enthusiasm for it, and Bill English produced some Treasury analysis showing that an increase of more than $500 million would risk pushing up interest rates and the exchange rate. From Bill’s political perspective, his reference to the Treasury work helps to undermine any Opposition plans to spend more, but Treasury’s analysis makes sense on its own terms. Even this modest $500 million, Treasury figured, would lead to some unhelpful outcomes. “Lifting future operating allowances by $500 million per Budget would have an OCR [Official Cash Rate] impact of around 15 to 30 basis points for higher government spending and around 10 to 20 basis points for lower tax revenue. The interest rate impacts are unlikely to be felt immediately, but rather over the next four or so years as the fiscal impulse is injected. The real exchange rate would be higher than otherwise by around 0.5 to 1 percent for around 3 years. Exports would be lower than otherwise by around 1 to 2 percent (0.4 to 0.6% of GDP)”.
Overall, I’d say that working debt down came out ahead, with a kick for touch on other priorities, as one of the Budget  handouts said more or less explicitly: “This is a moderate [spending] increase that will provide the Government with future options around investment in public services and modest tax reductions”.
Finally, I’d say that modern Budgets are hugely more informative and transparent than they used to be. I may have said this before – as I write, I’m in the Budget analysts’ lockup, and under the embargo I can’t access my blog posts on previous Budgets – but in the ’80s and ’90s, analysing a Budget was like one of those nightmares where you’re in an exam hall and the test paper has questions on a subject you’ve never studied. Budget analysts were under severe time pressure to find that year’s concealed bit of financial or accounting trickery. These days, we may or may not agree with the policy decisions, but at least we’ve been given the data to be able to make the call. Thanks, too, to the always helpful Treasury staff who answer sometimes recondite questions in the lockup with tact and skill.