If you haven’t noticed before, Statistics New Zealand has a nice little feature (shown below) where they ask you for feedback on their write-up of the latest data releases. 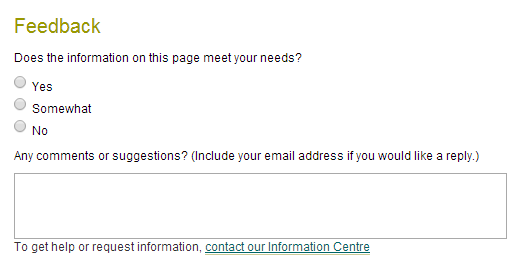 Could I encourage people to use the feedback opportunity? Not every statistical agency bothers to ask – quite a few, in fact, just chuck the stuff out, with rather mechanical boilerplate commentary – so it would be good if Stats’ efforts to survey user needs got a decent level of take-up.
One issue in particular that tends to come up in this context is how much interpretation Stats should do of what’s going on in the data. Those down the more purist end tend to believe official statistical agencies should shy well away from any kind of commentary that might be seen as judgemental, while those down the more flexible end (including me) think there’s room for statistical agencies to add some more value for users than they typically do at the moment. If you’ve got a view, these feedback boxes are one way to get it on board.
You might also be interested in having a look at the list of what have been ranked as New Zealand’s most important (‘Tier 1’) statistics to produce: the link is here and the list itself here.
I mention this for a bunch of reasons: many people don’t know this list exists; some people won’t have known about, or won’t have taken up, their chance to put in their tuppenceworth on what they’d most like to see Stats producing (though obviously there has been a solid degree of consultation to derive the current priorities); and I’ve been struck by what looks like a high level of public interest in what Statistics does and publishes. Going by page views on this blog, the pieces I posted about Day 1 and Day 2 of the recent Statistics User Forum have attracted unusually high levels of interest – even more than a somewhat provocative piece on foreign ownership of housing – so what Stats gets up to appears to be important to a wide range of people. Which is all the more reason to use Stats’ open door policy on user feedback.