Professor Norman Gemmell at Victoria has done some really interesting work on how New Zealand prices compare with those overseas. This has been done primarily for the Productivity Commission, which is interested in issues such as the degree to which expensive domestic inputs might be hobbling our export competitiveness, but it’s also been a long time research interest of Norman’s.

Suppose that a pint of beer costs US$5 in a bar in Chicago, and it costs NZ$8 in a bar in Auckland. And let’s suppose for convenience that the current exchange rate is 62.5 US cents. The cost of a beer won’t look expensive or cheap to the US drinker on holiday here: at 62.5 cents, he’s paying exactly what he would have paid back in Chicago. If the Kiwi dollar were to soar to 80 US cents, the NZ$8 price will translate into US$6.40, and will look rather expensive to the US visitor. And if the Kiwi were to slump to 40 US cents, the pint of beer in Auckland, now the equivalent of only US$3.20, will look very cheap indeed.

The point is that prices in the bar, and in the shops more generally, will appear cheap or expensive, compared to prices overseas, wholly as an artefact of moves in the exchange rate. Some days the beer may look cheap, other days it may not. You can’t be sure that beer is genuinely more expensive, in some entrenched or long-term or real way, in New Zealand.

And that’s the approach Norman uses. He looks at how prices compare relative to that 62.5 cents rate where most things look a reasonable buy (the ‘purchasing power parity’ or PPP rate), or, if everything looks expensive (because the actual, market exchange rate is above the PPP rate), then he looks at which things are even more expensive than others. He does it both against the OECD as a whole (or the 30 countries that make up most of it) and against Australia. And just to avoid the “aren’t things awful in New Zealand” trap that some of the media are prey to, I’d add that his work also identifies things that look cheap here by international standards.

Here’s a flavour of the results. If you like tables, the table shows his summary results of the tradable and non-tradables that look most expensive here compared to the rest of the OECD. And if you like graphs, the first graph shows how specific non-tradables compare with either the OECD or Australia, ranked from most expensive through to cheapest, and the second does the same for tradables. 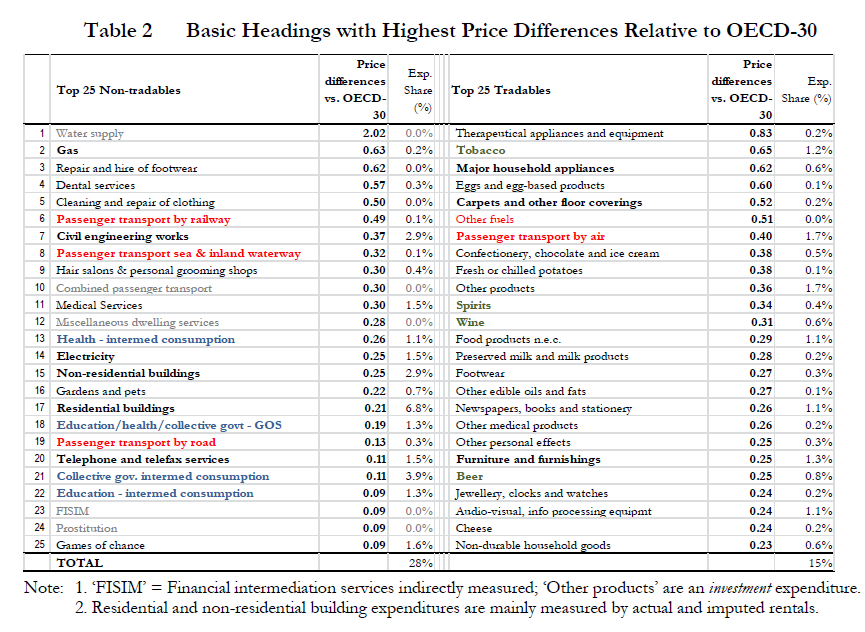 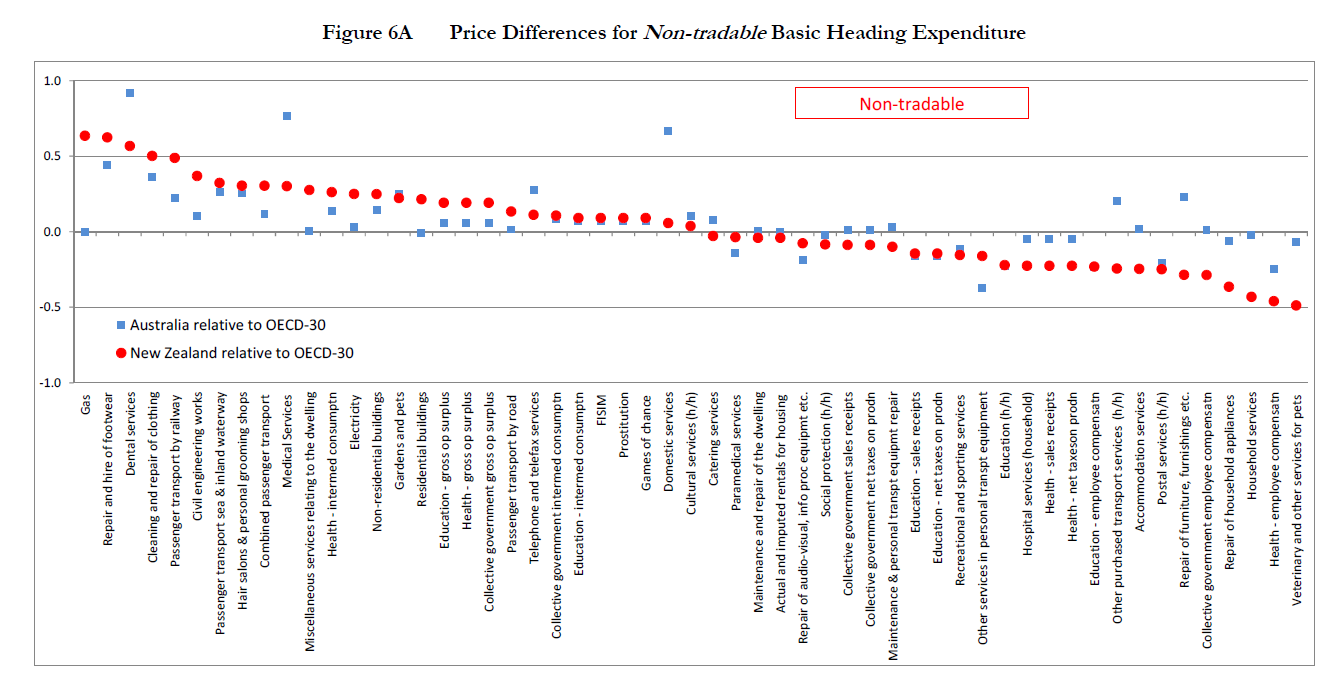 This may be a bit tragic, but I could pore over these results, and all the other ones, for hours (and have, come to think of it). The patterns are fascinating. Why are dentists so expensive here, but vets so cheap? Why are the big components of investment (construction and capital equipment) so expensive, with potentially serious ramifications for New Zealand industries? Why is lamb cheap, bread reasonable, cheese on the pricey side, and eggs outright expensive? Why are most transport items expensive (other than your own car, where you’d think cheap second-hand imports have been keeping the price down)?

For some things, there seems to be a prima facie explanation – relatively high excise taxes on booze and bakkie, for example – and for others some suspicions, benign or less so. For lamb, Norman wonders if it could be the benefit of comparative advantage , which is down the benign end, but he also thinks less benign thoughts about transport, where there could be competition issues. As he says,

“Notably ‘passenger transport by air’ is especially highly priced in NZ (at 0.4 or 40% above OECD-30 average prices) but it is even higher in Australia (at 0.66 or 66% above the OECD-30). The lack of a genuinely internationally competitive environment for this so-called ‘tradable’ travel category in NZ-Australia seems a plausible candidate explanation for the high price differences”.

I’d suspect the degree of workable competition is an explanation in other sectors, too.

In short, you keep coming back to why, why, why – and hopefully this is where the second leg of Norman’s work will kick in. I can’t unfortunately be in Wellington today for Norman’s speech at Vic, where he’s going to go into some of the plausible reasons for these patterns, but I’ll blog again when he’s let us know.