A couple of weeks back I blogged about the Budget, and I mentioned that Bill English had introduced what I think is a new fiscal objective – I’m pretty sure it’s new – or at the minimum explicitly restated an existing one, namely “After net debt has gone below 20 per cent of GDP, the Government intends to manage this debt within a range of 10 to 20 per cent of GDP over the economic cycle”.
I seem to have been just about the only person to have been interested in this: it didn’t make much of a splash at the time, and it’s disappeared off the media and blogosphere radar since. It’s a bit of a shame it’s been overlooked: it’s quite a good idea. So I thought I’d raise its profile a bit.
There’s a big economics literature about the relative utility of rules as opposed to discretion in setting economic policy, and particularly in setting the appropriate stance of fiscal and monetary policy. Along that debated continuum from “all rules” to “all discretion”, I’m somewhat partial to rules. While it sounds like a toothpaste ad, rules can indeed help avoid the buildup of unsustainable imbalances (almost by definition rules lean against boom and bust), and they improve transparency and political accountability. If a populist politician wants to buy the vote with a fiscal splurge in election year, for example, an apolitical rule saying where the deficit ought to be, give the state of the economic cycle, at least exposes the degree of profligacy. It may not stop it, but it makes it clear what’s actually going on. Same goes for letting inflation rip, or suppressing interest rates, or the other monetary policy wheezes that opportunistic politicians might want to try on.
The main problem with rules, though, is that they tend to get adopted by the responsible countries that least need them, whereas the irresponsible ones won’t want their hands tied. And it’s certainly true of our latest net debt rule, too. Here’s the current net debt picture for most of the developed world. It  shows net government debt as a percentage of GDP as estimated by the IMF for this year, and it comes from the IMF’s latest (April) Fiscal Monitor (you can download the source data for yourself as an Excel file here and get the whole document here). 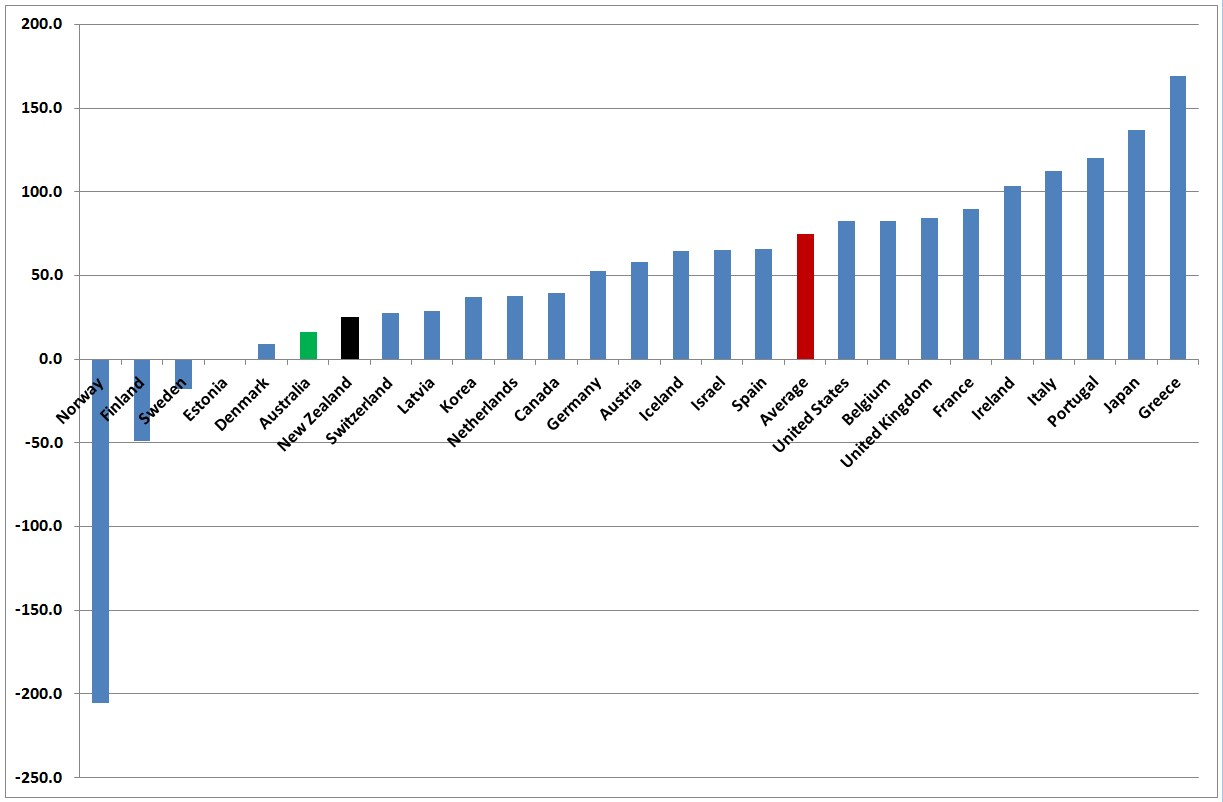 Basically it’s the Scandinavians, the Aussies and us, and Switzerland, who have prudently conservative net debt levels (you could make a case for the Koreans, the Dutch and the Canadians too) – just the sorts of folk that least need rules binding their hands, yet just the sort of folks who will introduce ones anyway for good order. That said, Norway could in principle have squandered its North Seas energy wealth: who’s to say one of the seriously wacky parties making headway in recent European elections mightn’t have sprung up in Oslo, too? So it’s a prudent safeguard to have a rule that accumulates the wealth into a sovereign investment fund. It doesn’t totally safeguard policy from the potential loonies, but it’s helpful.
And at the other end of the spectrum, you’ve got the usual suspects, where you can see that the likes of Greece have effectively reached the end of the fiscal line. I don’t want to go into the pro and anti austerity debate, and I’m prepared to accept that today may not exactly the right cyclical time to be reining in the Greek fiscal extravagance, but equally you can see why people are saying, enough is enough, and if not today, then soon. Net debt rules along the way might have helped – maybe only a bit – to stop the Greek fiscal gravy train crashing into the terminus.
They’d have helped in France, too. France has run forty years of successive fiscal deficits – sometimes not very big ones, fair enough – but a net debt rule would have better exposed (and ideally moderated) the cumulative impact of individual deficits, each of which did not look especially problematic on its own.
So I quite like this net debt rule. I have no idea where the 10% to 20% of GDP level came from, or whether it’s optimal in any sense. But I don’t much care. Any rule that says, keep net down to some internationally low level, looks a useful weapon in the fiscal arsenal.