It’s worth checking in from time to time with Treasury’s Monthly Economic Indicators (you can find links to the latest ones here). The value is not so much that the analysis is wildly different from what you get from the bank economists or the NZIER, for example, but more that the Indicators pull together data from all sorts of sources and typically give you a longer-term view of the economic cycle, plus they have interesting special topics from one issue to the next.

Here, for example, is the strength of the current upturn, set in historical context (taken from the latest Chart Pack). 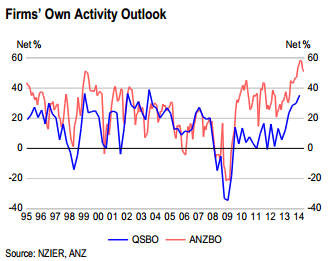 What we’ve got is one of the strongest – perhaps the strongest – upturn in 20 years. It hasn’t been feeding through to wages growth yet, but going by the historical lag between falling unemployment and rising wages, shown in the chart below, we’re now at the point where a tightening labour market will start feeding through to higher wages for any given job (which is what the Labour Cost Index measures). 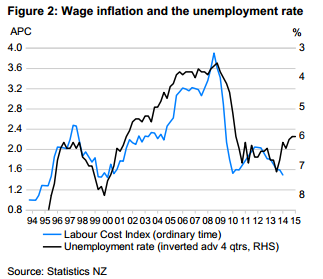 In other ways, though, the good times have already shown up. People’s net worth, for example, is well on the up. Relative to disposable income, the way it is shown in the graph below, it’s rising, but hasn’t got all the way back to pre-GFC levels. But in actual dollars it has. The pre GFC peak for household net wealth, according to the data on the RBNZ’s website, was $633.4 billion in September ’07. It dropped to a low of just under $570 billion in March ’09, but since then it’s been growing strongly. It got back to its pre-GFC levels at the end of 2011, and it’s kept on going.
In the year to March ’14,  the value of households’ financial assets rose by over $23 billion dollars to $269.6 billion, and in the year to December ’13 (the latest available data) the value of the equity in their houses rose by nearly $53 billion to $530 billion. Much of the coverage of higher house prices has been been negative (including in the latest IMF report on New Zealand, one of the more anodyne documents you’ll ever read): what’s at risk of being missed is that a lot of middle New Zealand is seeing serious $$$ signs on the house, the KiwiSaver, and the odd share that they’ve bought or inherited. There’s a rather impressive wealth effect mounting in the background – and among other things I wonder if it’s being overdiscounted in the electoral forecasting game. 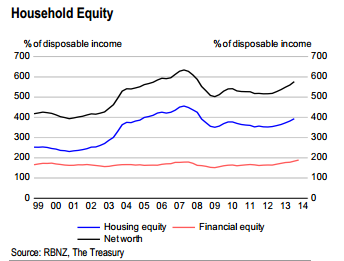 The special topic in this month’s Indicators is a comparison of the economic and fiscal outlook in Australia and New Zealand.  Here’s one way of portraying things – the output gap (or how much slack there is in each economy). Not a lot in ours, and likely to get even less, and a bit more in theirs, and getting larger. It’s not often that ours is the better story, so we might as well enjoy it while we can: smoke ’em while you’ve got ’em. 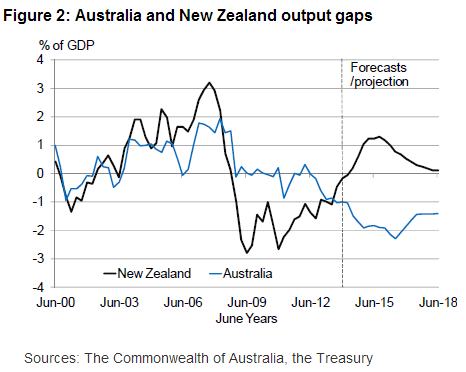