People have been banging their heads for some time against New Zealand’s “productivity paradox” – we’ve got good institutions, good policies, and ready access to the best technology, but can’t seem to generate the same income from those opportunities that other developed countries do – and often the search for answers starts pointing towards innovation creation and uptake, or in other words to that vast area of general ignorance known to economists as “multi factor productivity”.

I got thinking about this over the weekend when I re-read one of the more startling items to come out of the Productivity Commission’s recent report on raising productivity in the services sector. I’d noted it myself first time I saw it, and thought “that’s odd”, and put it aside, but the other week I was in a group talking about the services report and found the other group members all thought it was pretty strange, too, so I thought I’d draw it to more people’s attention.
But before going there, a preamble on innovation.

You’re having a barbecue. Everything’s good to go, till you fire up the burners and discover the LPG bottle has run out. Quick dash to the nearest petrol station where, until recently, this happens.

You get the attention of one of the attendants (sorry, “forecourt concierges”), they kit themselves up in goggles and gloves, check your bottle is still fit for use, weigh your empty gas bottle on the gas machine, figure out (with a calculator) how much gas it would hold, attach it to the machine, fill it up, detach it, test it for leaks with soapy water, you pay, and away you go.

Then some bright person brings in Swap’N’Go. You give your old bottle in, they give you a full new one, you pay, done.

God knows how much cost has been taken out of the LPG bottle business by Swap’N’Go, but I’d bet it’s very large. One central depot to fill the bottles takes out all the sets of petrol station filling equipment, plus all the training costs at the stations, plus the cost of attendants’ time spent doing gas bottles. Plus it’s safer (I’ll bet the training at the one specialised depot is a lot better than it used to be when you were trying to train multiple shifts of transient attendants), and quicker for everyone involved. Quality up, costs down, time shortened, productivity an order of magnitude higher.

And it’s a completely low tech (or even no tech) innovation, entirely down to smart business reorganisation. I seem to remember one of  the more recent Nobels in economics going to someone who’d figured out that business innovation along these lines had made a very large contribution to economic growth over the ages – no doubt someone will remind me who it was – and I’m not surprised.
Right. Back to innovation in New Zealand. If business innovation is important for growth, then we need to be alert to the need for continuous innovation, and we need to be as diligent at it as other places if we want to match their living standards.

But the Productivity Commission came across this rather suggestive piece of evidence that says New Zealand businesspeople’s heads aren’t in the right innovation space at all. They ran a survey which among other useful things asked businesses that hadn’t invested recently in ICT, why not.

What would you think the lead answer was? Cost? Complexity?
Not a bit of it.
The top answer was, “I couldn’t be arsed”, which is my rough translation of the complacent result shown below. 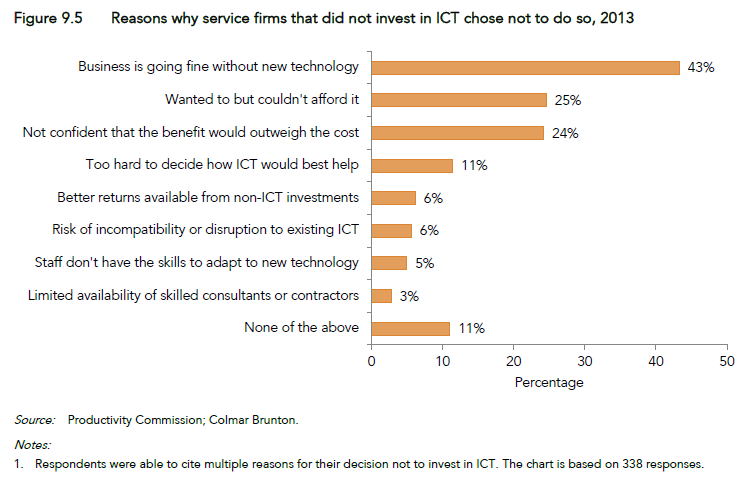 “It would be cause for concern”, the Commission said (pp177-8), “if this response reflects a large number of firms with no aspirations to expand or that face little competitive pressure”. Indeed, and with knobs on when it comes to that point about “little competitive pressure”, though as the Commission says, in what’s either judicious analysis or one of the longer kicks for touch you’ve ever seen, “The response is, however, challenging to interpret. It could also cover cases where respondents are simply unaware of the possibilities of using ICT to improve their business. Equally, it could cover businesses that invested significantly in ICT more than two years ago or where there are small benefits from investing in ICT. Without further information it is hard to read more into this result”.

My feeling is that the Commission was onto something important, and I think it could have been very productive if the government had chosen, as the Commission’s next line of enquiry, some deeper analysis of what’s going on here. Maybe economists aren’t the best people to investigate business management – with exceptions (eg Baumol, Varian), economists tend to see the business production function as a “black box” with inputs in and outputs out, and they don’t typically take the lid off the box – but this looks to me like one of the more likely keys to fit the productivity paradox lock.