Last week’s annual conference of the New Zealand Association of Economists was a big success – you can see the programme here (click on ‘2014 Conference Programme’ and select ‘2014 Timetable’), a fair proportion of the papers have downloadable links if you’d like to follow them up – and as usual the papers covered a very wide variety of topics. Rather oddly, though, there was almost nothing on competition or regulation (one paper by AUT’s Lydia Cheung on the use of the Upward Pricing Principle in analysing the competitive effects of mergers), a gap I’m planning to fill at next year’s conference.

At wide-ranging conferences like this, there tend to be moments where you come across something startling or significant that you didn’t know before, and for me – and quite a few others, going by the tweets (#NZAE14) at the meeting – the real stunner was a graph showing trends in global inequality over the past 20 years. Covec’s Aaron Schiff called it ‘The graph of the century’, and I’ve discovered that a Financial Times columnist has called it ‘The chart that explains the world’.

It took me a little while to track down the source, but its origin was an event at Columbia University’s Heyman Centre for the Humanities in February 2013, where three speakers – Prof Joseph Stiglitz, Prof James K Galbraith, and Branko Milanovic, lead economist in the World Bank’s Research Department – spoke on the topic of ‘Global Inequality’ (this was pre-Piketty, by the way). Of the three presentations, only Milanovic’s has been archived, and we’re fortunate it was, as it was the source of the graph.

On the face of it the paper doesn’t sound a thriller – ‘Global income inequality by the numbers: in history and now – an overview’ – but it’s terrific from various perspectives. Not only does Milanovic explain different concepts of inequality in a remarkably accessible way – a secondary school class in economics could easily follow it – but he’s got some fascinating results to show. You can download it here:  it’s well worth doing.

Here’s the graph that had conference attendees oohing and aahing. 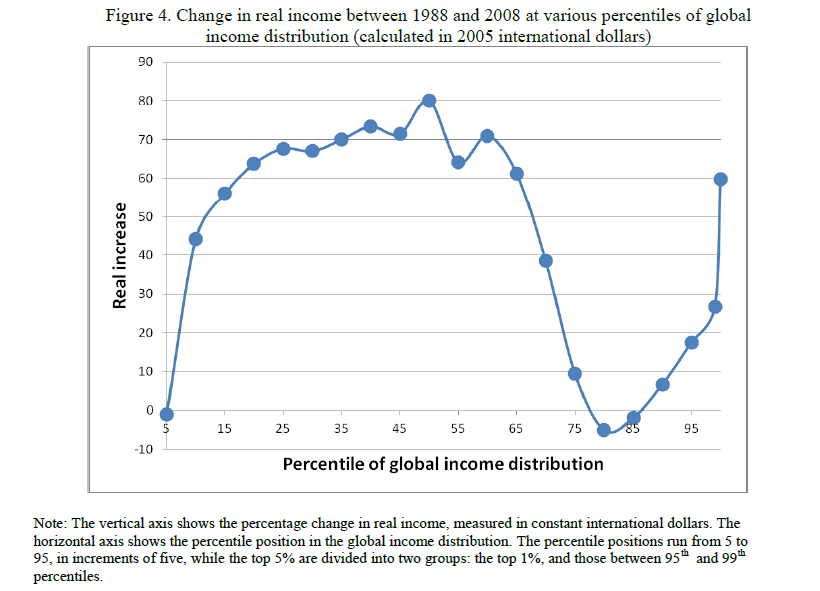 The graph’s reasonably self-evident: the main thing you need to realise is that this is the global distribution of individual incomes, and it only runs from 1988 onwards because for large parts of the world there weren’t good official national surveys of income distribution before then.

Isn’t it fascinating? You might have thought that the very rich were going to be the big beneficiaries of the globalisation of recent years, and it’s true that they’ve done well, but they haven’t done quite as well as the big surge in income for the world’s  lower and middle classes, which in turn is principally explained by strong rising incomes in China and India.

And there are two groups that have missed out.

One is the very poorest, where the bottom 5% of the global population have had no growth in income for the past 20 years, and for which we can point the finger (or, better, the rifles of the execution squad) at the Mobutus and the Mugabes of this world.

And the other group – including, very likely, a fair few of the readers of this post – is in the vicinity of the global 75th to 90th percentile. Milanovic says “These people, who may be called a global upper-middle class, include many from former Communist countries and Latin America, as well as those citizens of rich countries whose incomes stagnated”. It’s an odd grab bag – the nomenklatura and the apparatchiks, the hangers on of the juntas, the semi-skilled in the developed world whose jobs can be done in the developing world, the managerial jobs that have been automated away – but they’ve all been left behind by the surge in a global middle class and what Milanovic calls “probably the profoundest global reshuffle of people’s economic positions since the Industrial revolution”.

He also suggests, albeit on quite a short time series for this measure of global income inequality, that “perhaps for the first time since the Industrial Revolution, there may be a decline in global inequality. Between 2002 and 2008, [the] global Gini [coefficient] decreased by 1.4 points. We must not rush to conclude that what we see in the most recent years represents a real or irreversible decline, or a new trend, since we do not know if the decline of global inequality will continue in the next decades. It is so far just a tiny drop, a kink in the trend, but is indeed a hopeful sign. For the first time in almost two hundred years—after a long period during which global inequality rose and then reached a very high plateau—it may be setting onto a downward path”. The world, in short, may not be developing as all the acolytes of Piketty might believe.

There’s lots more – the much greater importance these days of where you live, for example, as opposed to the lower importance of where you are in your country’s income distribution, in determining your income level – and if you’ve got any interest at all in the great sweep of human economic development, this paper’s a must read.