John McDermott, the Reserve Bank’s Chief Economist, gave a speech to the Wellington Chamber of Commerce today, about ‘potential output’, which he said is, colloquially, “how fast the economy can expand without generating inflation” (you can read the speech on the Bank’s website here, or download it as a pdf).
There is that inflation angle, but I was more interested in the Bank’s estimates of potential output for other reasons.

Here’s the Bank’s take on how fast the economy can grow on a sustainable basis. 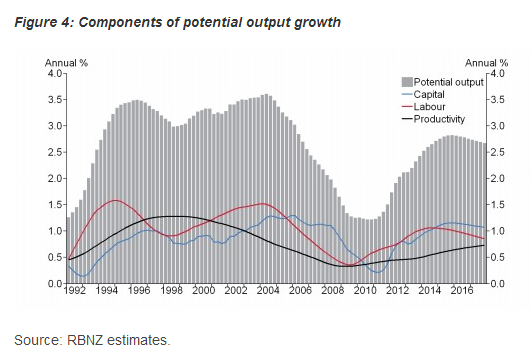 The grey bars show how much extra we could produce in any given year, and the three coloured lines show the contribution of three different things to that increased ability to produce. We can put more people to work (the red ‘Labour’ line), we can give them more equipment to work with (the blue ‘Capital’ line), or we can work more cleverly (the black ‘Productivity’ line). The three lines add up to the grey bar. John, I’m sure, would be amongst the first to agree that estimates of potential output, let alone of its components, are very much a work of art, that different researchers can (and do) come up with sometimes very different results, and that the estimates in the graph are more in the nature of indicative than accurate to two decimal places, but even so, let’s go with them as being more or less the underlying reality.

My first thought, when I saw the estimates for the latest few years, is that they’re not that flash, are they? Being able to generate growth of 2.75% a year leaves many parsnips unbuttered, especially if you take off population growth, since per capita incomes would only be growing by something like 1.75% a year.

You look, in particular, at the contribution of investment. Right now, the high exchange rate is making capital equipment (which is largely imported) cheaper than usual, the interest cost of financing it is also unusually low, and the economic cycle is very strong. If ever there was a time for a bigger than usual boost to growth from a surge in capital spending, this is it, but it doesn’t seem to be happening. The contribution from capital isn’t significantly up from previous levels, and that’s a bit of a bijou problemette, since that’s the only lever you can pull on in the short-term. Higher immigration tends to take a while to organise (even if you can find a political way to sell it to the xenophobes), and how to boost productivity is still something of a mystery.
All up, it leaves you feeling a bit downbeat about our longer-term growth prospects, and wondering what we’ll do for an encore when the Canterbury rebuild winds down. And others, I see, are starting to feel the same way. The latest forecasts from the economists at the BNZ have GDP growth of 4.1% this year (excellent), 3.5% in 2015 (jolly good), and 1.8% in 2016. Oops.

That’s the pessimist’s reading of John’s results, but there’s also an optimist’s version. John produced an alternative way of measuring potential output, namely what the economy actually managed to do over extended periods, since almost by definition “The average rate of output growth over longer periods of time can provide us with a rough gauge of the growth capacity of an economy”, as he put it. So he showed a series of 10-year averages, in the chart below. 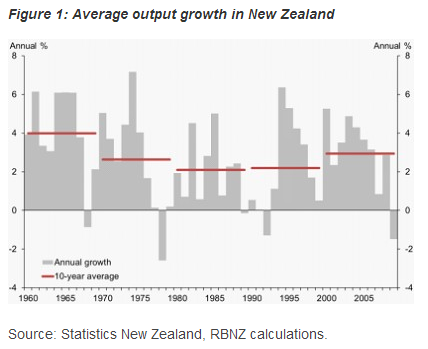 This seems to me to accord with the stylised facts of the economic history of New Zealand over the past 50 years – good performance in the Sixties, progressively worse performance in the Seventies and Eighties thanks to external shocks, grossly inept domestic economic management and the upfront disruption of structural reform, slightly better performance in the Nineties, and somewhat better again more recently.

The bad news may be that we still haven’t built – or rebuilt – up to the sorts of rate of growth that would make a real difference to living standards in short order, but the good news is that we’re in better shape than we’ve been.

Though that tangentially reminds me of the old joke about Brezhnev’s economist, who came to him with good news and bad news.

“Give me the bad news, comrade”, says Brezhnev.
“Well, comrade General Secretary, the bad news is that Soviet GDP this year is well down on last year”, says the economist.
“I know that, dammit, give me the good news”.
“Comrade, this year’s GDP is much higher than next year’s”.

0 Responses to “How fast can we grow?”