Over at Dim Post I see Danyl is discussing the latest (2014) Household Income Report and Piketty’s book Capital in the 21st Century.  Excellent – there are lots of important and interesting issues to discussing look at these sources.

However, in this instance the data he is using and his interpretation is sadly a bit off.  I thought I’d discuss why this is here.  In his post he states:

Incomes increased by 4% from 2011 to 2013. But economic growth during that period was a lot higher than 4%. The sum of GDP growth/quarter from the start of 2011 to the end of 2013 is 8.9%. Pikkety argues that what you’d expect to see in a typical capitalist economy is income growth that is a lot lower than economic growth, and the bulk of the wealth created by new growth going to the owners of capital.

That’s not quite what we’re seeing here. About half of wealth created by growth is going to income earners but that’s going to the top half of earners. The rest is, presumably, going to the capital owning class, mostly the top 1%.

If that is the case – and remember, I’m just a left-wing blogger who happens to be 11% of the way through a popular economics book – then the gap between the haves and have-nots is, actually widening. It’s just not doing so purely through income distribution.

Let us take period for period.  The 2014 HIR is using the 2013 HES (Household Economic Survey), which involves individual survey’s between July 2012 and June 2013.  Expenditure GDP in the year to June 2013 rose 5.5% from June 2011, production GDP rose 5.1%, and we don’t know what income GDP did quite yet.  In theory the three should be the same – but measurement error

Furthermore, the increase in income figure is a per capita figure – the lift in GDP is an aggregate figure.  However, the average population in the June 2013 year was 1.4% larger than in the June 2011 year.  Putting all this together, a 4% lift in average income sounds about right – if anything it may seem a little bit strong at first.  However, if we then take into account that real GDP isn’t really income – as it doesn’t take into account transfer flows overseas (interest payments, dividends) and changes in export and import prices – then we may instead look at a figure like RNGDI to give us an idea.  If we thought RNDGI per capita was appropriate, we would think the HES is maybe a bit excited – as it rose by 2.9% during this period (as compared to 3.6% for prod GDP and 4.0% for exp GDP) [all data via Statistics NZ’s awesome Infoshare].  Let us even throw up a graph of 2 year growth rates in per capita measures for kicks! 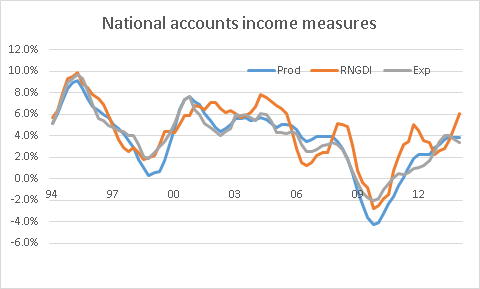 Now there are deeper points.  Say that the data was really different, does that mean that capitalists have been doing something.  Well no, this was my comment on his post:

The capital owners are in the HES, as domestic capital owners are also “households” in econ lingo – the key thing is that different measures of income give very different results. Practically the national accounts figures, tax data, and household surveys don’t match up a lot of the time – and given the type of data available distributional work was more appropriate with household surveys and analysis of aggregates was more usefully done with national accounts data.

The cool thing with Piketty is he has put a lot of work trying to create data that gives a representation of the functional/macro distribution of income (based on classes, eg capitalists, labour). And while this is great, it doesn’t bear a relation to household survey data – as people in those surveys are “part labour” and “part capitalist” (as well as reporting differences in time period, accuracy, etc – big thing is that a lot of the “long tail”, esp with capital income, is believed to be underreported in HES). So I don’t think we can make the claims you’ve put down here – as the HES data doesn’t measure the same things as the Piketty story.

Thinking about how Piketty’s analysis fits into NZ is important though, I heard that there is work being done on that around the place at the moment – will be interesting to see what that tells us. A key thing I’d keep in mind is that, if we look in income share in the national accounts, profit share hasn’t been rising – furthermore, if we look at the top 1% data there hasn’t been much movement there. New Zealand doesn’t have the same inequality issues or productivity increases that we’ve seen from the accumulation of capital overseas – I wouldn’t be surprised if there was a link between the two! Something I was hinting at with this: http://www.tvhe.co.nz/2014/02/05/ict-factor-shares-employment-and-inequality/

Don’t believe me, let us go to the HES site:

The survey also asks for detail on where households get their money from – for example, wages and salaries, self-employment, investments, or benefits.

Data comparability is a pain.  Even think about the way we “deflate” these different things, GDP uses the GDP deflator while the HES is using CPI – they represent fundamentally different views on the basket of goods we are adjusting with, and with respect to, when we figure out income!  What about depreciation, should we really be including the replacement of capital stock as income – this is a big question, and the right response depends on what sort of underlying questions we are trying to answer!

And there is also the post Brian Perry makes that the data is very volatile given the sheer upheaval of an economic crisis and Canterbury earthquake.  In this context, the 4% figure is itself reasonably uncertain let alone the difference between groups and the level of dispersion in incomes!!!  Trying to fit too much of a narrative around the last few years doesn’t make much sense – income data needs to be viewed with longer term trends.  This is what Piketty tries to do in his text – not to define transient movements in such broad brush terms

Given this we can get back to the broad Piketty story.  The Piketty story doesn’t fit New Zealand data that well right now – it is a multifaceted story based on a certain view of the relationship between labour and capital which, combined with slowing population growth, leads to growing dispersion in income from wage earners to capital owners.  We don’t have growing capital accumulation, we complain constantly about a lack of “capital deepening”, and the World Top Income database suggests that the “Top 1%” figure hasn’t seen the same dramatic rise as overseas.

Instead, New Zealand has a very different income inequality story – one that Brian Easton has been chatting about.  Essentially there were a bunch of reforms back in the 1980s – although much of the data only started to be measured in a consistent way between 1986/88 there is an agreement that income inequality rose in the late 1980s and early 1990s.  It then settled at this new higher level.  What drove this, whether it is “fair” or “unjust”, and how we should consider policy given is the issue – and this issue hasn’t changed since it was being debated at the time.

Income inequality isn’t a new and worsening issue in New Zealand – it is the same old issue around the reforms that has always existed.  There is nothing wrong with having that debate again – we do not have to pretend we are another one of Piketty’s countries to have the discussion!  So I am glad he is discussing the issue, I just think we can get pretty far in discussing whether things are fair by considering the pretty objective discussion put out by MSD (it is seriously just reporting the data) with regards to the ethical principles we may hold – rather than mincing up different data sets in an inappropriate fashion.

Note:  I have no interest in taking sides around redistribution.  My sides are personal, my blogging is just about considering the questions.  Both sides can make valid and compelling arguments about more or less redistribution.

Sidenote:  I’m not sure what this meant:

At 11% in Danyl will have hit the r>g inequality – this is the situation where the return on capital is greater than economic growth/income growth.  Piketty is using income and economic growth as interchangeably – as in the long-run we’d expect measurement problems to wash out and this to be the case.  I suspect this is where he accidentally created a “capitalist” class that doesn’t exist in his addition – the capitalists are in the income and GDP surveys just like everyone else!