Documentaries. They make you feel like you’re learning something, unless you actually know something about what’s on the tele. In the latter case, they just make you mad.

Nigel Latta’s going to be exploring the horrors of inequality later tonight on TV One. [Note: originally published Tuesday evening at Offsetting Behaviour] Here’s the TV One blurb:

Nigel Latta: The new haves and have nots‘I grew up believing that this was a country where everyone had a fair shot. I believed that if you got an education, and you worked hard, then you had just as much chance of getting ahead as anyone.After making this programme I’ve come to realise that I was wrong—the world I grew up in has gone, and it’s been replaced with a new set of rules.’

As we’ve noted here before, inequality in New Zealand has been flat for at least the last decade. There was a rise in the 80s, then a flattening. Here’s the Gini measure: 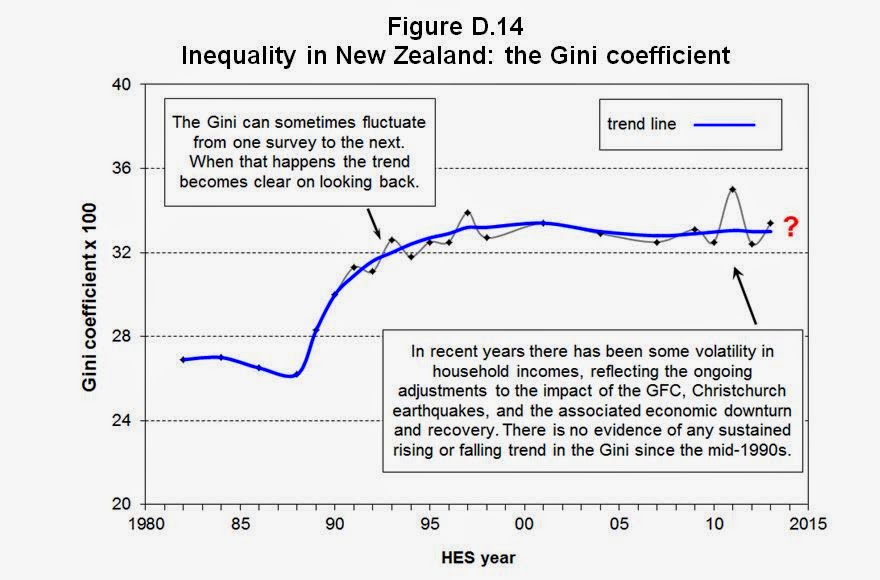 There are two other sources you should read: Treasury’s background note on increasing equity, and MSD’s report on household income inequality. The latter is the source of the picture above. If you read the full report, you’ll find rather a few measures of inequality. They all show a rise in the 80s followed by a flattening [Update: the P80/P20 ratio shows declining inequality in the 2005-2014 period, with a bit of volatility in the last couple years.].
Now keep that in mind when watching Latta’s show. Is is framing it as “Income inequality has risen substantially since the 1980s”, leading people to believe that there’s this long run worsening? Or is he framing it properly as a big hump in the late 80s through mid-90s, then flat thereafter?
The reason I’m posting this now, before his show, is that I had sent to me an interesting note. The note tells me that the Treasury Chief Executive was interviewed for the Latta documentary. The Treasury Chief Executive, according to the note, was very careful to point out that the “rise in inequality since the 80s” was concentrated at the start of the period, that much of it was due to changes in household and family structure, and that inequality has been flat for over a decade. Further, the note says that this part of the Treasury Chief Executive’s footage was edited out of the documentary.
So if Latta leaves you with the impression that we have some increasing trend in inequality, rather than a “flat for over a decade” trend, despite that he was very clearly told otherwise by the Treasury Chief Executive, or at least according to the Note In Which I Put Very Great Confidence, you can draw certain conclusions about whether you’re watching a documentary, or something else entirely.