If one of the the points of a public broadcaster is to provide basic factual information to voters prior to an election, so that they can then make up their own minds about what policies are the appropriate responses to the current state of the world, then TV One failed magnificently last night* with Nigel Latta’s infomercial.

The video of it is here (Series 1, Episode 4 if the link changes).

Latta made the case that:
He also spent a lot of time talking with poor families about that life isn’t exactly easy for the working poor.
Now you can take whatever position you like about the appropriate level of support for the poor and for the working poor, and about the appropriate level of inequality. But, those positions should at least be informed by a basic level of understanding about the current statistics and trends. If inequality has been worsening continuously for the past two decades, that could yield different views about appropriate policy than if inequality has been pretty stable for the past couple of decades. Similarly, if real incomes among the poor have been declining over the past couple of decades, that too could easily yield different views about appropriate policy as compared to a situation where real incomes among the poor have been rising a bit more slowly than among richer cohorts.
I’m not here going to take a view on appropriate policy. But I will put up the baseline facts that should be common knowledge among anybody wishing to have a view as to appropriate policy. This is all from the latest report on the topic from the Ministry of Social Development.
First, as noted last night, inequality has not been increasing. There was an increase from the mid 1980s through the early 1990s, and it’s been flat since then. Last night I put up the Gini time series, but that’s hardly the only measure of inequality. Let me here quote the Ministry of Social Development report:

Overall, there is no evidence of any sustained rise or fall in inequality in the last two decades. The level of household disposable income inequality in New Zealand is a little above the OECD median. The share of total income received by the top 1% of individuals is at the low end of the OECD rankings. 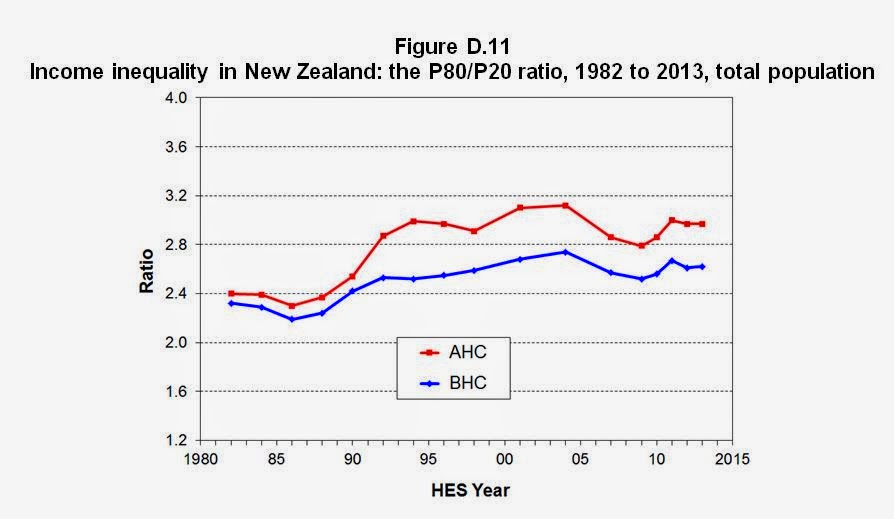 If you like ratios other than 80/20, the paper has a wide set of them, both Before Housing Costs and After Housing Costs. They’re all a bit noisy, but they’re all basically flat since at least 2001, with some flat since the mid-90s.
And here’s that big middle class squeeze: the proportion of total income going to individuals in deciles 4 to 9. The fifty percent of the population in the upper middle class earns about 55% of total income. 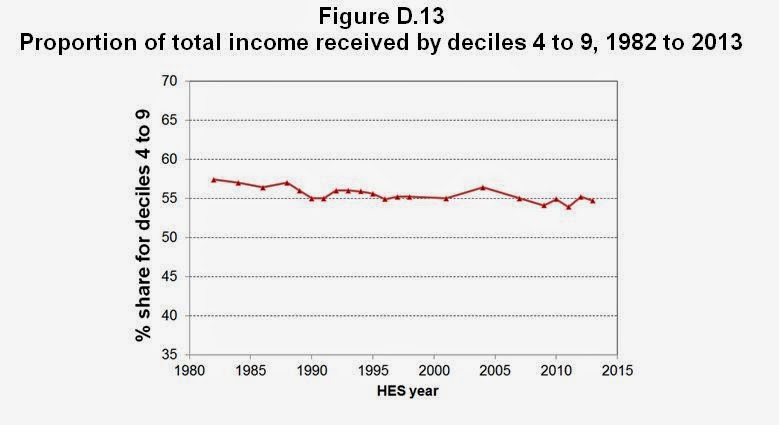 Latta focused a lot on wages at different levels rather than the kinds of numbers above. We do have a reasonably progressive tax system with substantial transfers to the working poor. The numbers above reflect the after-tax-and-transfers income at the different deciles. The tax and redistribution system has worked to maintain pretty stable levels of inequality over the last couple decades on a wide variety of measures of inequality. It is a substantial mistake or deliberately misleading to portray things instead as a rising trend in inequality. And since I’m told that the Treasury Chief Executive told Latta, on footage left on the cutting room floor, that inequality was flat, Latta seems to have been wilfully seeking to mislead the public about the basic facts around inequality during and election campaign on a publicly funded television station.
This is not right. Public broadcasting is supposed to at least give everybody the correct basic facts so that voters can then deliberate about how to interpret and deal with those facts in policy choices. When it instead deliberately misleads the public into taking the narrative pushed by the Labour Party, I start wondering why we have a state broadcaster. Public broadcasting isn’t supposed to make people dumber.
Enough on inequality. The MSD report also has the basic facts on poverty trends. Latta put up a one-year big increase in incomes at the top end of the distribution during the post-GFC share market recovery as representative of how the poor have suffered from the GFC as compared to the rich. Here’s real household income changes over the period by decile:

The very poorest cohort did ok, though much of that was a rise in NZ Super. Things stagnated for the working poor; middle to upper-middle cohorts did fine. Folks in the 9th decile did about as well as folks in the first decile, while those at the very top stagnated.
How about over the longer period?

Latta was right about one thing though: housing costs have hit disposable incomes of the poor by more than they’ve hit disposable incomes among the rich. MSD reports that, because of strong increases in housing costs, AHC incomes for households in the bottom two deciles are lower in real terms than in the 80s. But, again, most of the increase in hardship came in the early 90s. 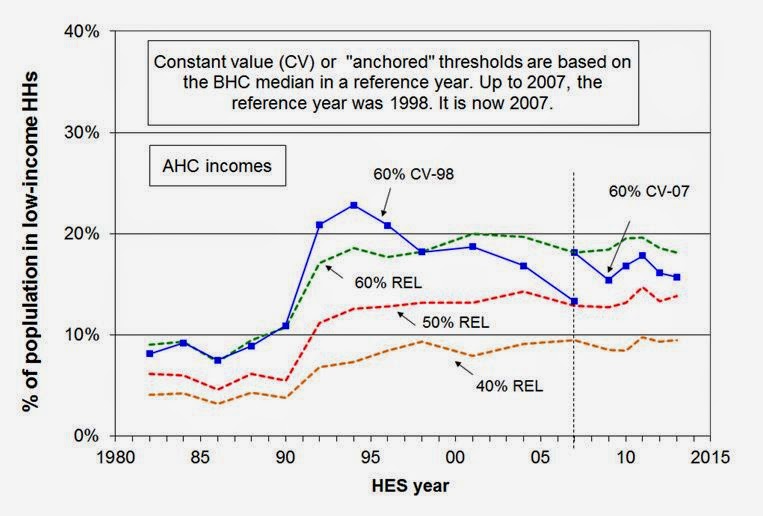 Follow the blue line. This one’s defined around 1998 real before-housing-cost incomes. If you were in a household that earned, in inflation-adjusted terms, and after housing costs, less than 60% of median 1998 incomes, you’re in the cohort that follows that blue line.
You can see a sharp rise in the early 90s, then a slow drop through 2009, then a hump during the GFC that reverses. Ignore the discontinuity in 2007 that obtains when they rebased the measure. The proportion of low-income households is higher than it was in the 80s but the trend since the mid 90s is basically flat or declining. Is this just me cherry-picking measures? No. You get the same thing on the relative income lines. If you don’t like current poverty or inequality rates, that’s fine. But they’re a “it’s been like this for about 20 years” thing, not a “John Key is Evil” thing. The current state of affairs is roughly the same as it’s been through many terms of both National and Labour.
And now, same thing again for children in low-income households. 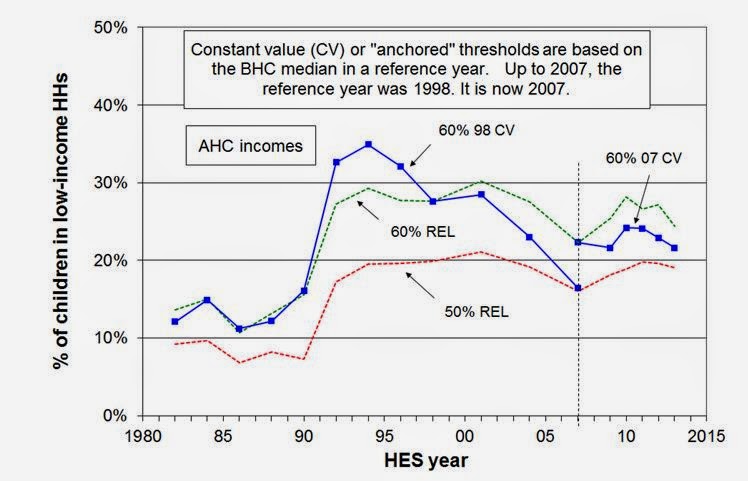 It’s hard to pull any worsening trend out of this. There was a big increase in the early 90s, and a fall since then.
Finally, Latta focused a lot on the working poor. The MSD report makes real clear that poverty is primarily among beneficiaries.
Nigel Latta’s big beef seemed to be with the reforms of the 1980s. Those reforms did yield a wide range of changes, including to inequality and poverty measures. Latta, throughout the documentary, presented what seemed to be an ever-worsening trend in poverty and inequality. And he seemed to be importing a lot of the American narrative around the top 1%.
Here’s the NZ data on the top 1%, both in time series and as compared to other countries, again copied directly from the MSD report:
Income inequality in New Zealand, 1984 to 2013 HES
Income inequality in New Zealand compared with other OECD countries, c 2011-2012
Note further that at least some of the rise in top incomes comes from reporting changes when the tax system was fixed to reduce the incentive to under-report incomes for top earners.
The American narrative around the “1%” simply does not here apply.
Take from all of this whatever policy preferences you want, while thinking hard about the kinds of things Nolan urges you think about. You can’t start thinking properly about appropriate policy if your background facts are all wrong. Hopefully this corrects some small fraction of the harm that Nigel Latta did last night. Even better, read the whole MSD report on it.

[Update: ‘Derp’ is the constant, repetitive reiteration of strong priors. Latta should have updated after talking with the Treasury Chief Executive. He instead just repetitively reiterated his priors about inequality, herping a flerp of derp in the process.]

*First published at Offsetting on 30 July.