Last week the Business Council of Australia released a report, Building Australia’s Comparative Advantage, which in turn built on another report, Compete to Prosper: Improving Australia’s global competitiveness, which they had commissioned from McKinsey Australia. I haven’t read either of them fully yet, and I’m not too sure whether I buy into the “let’s aggregate industries into globally competitive sectors” line taken in both of them, but in any event I also found this: This is McKinsey’s estimate, in Aussie cents per kilogram, of New Zealand’s cost advantage over Australia in the international dairy trade. The total advantage in our favour is 55 cents per kg, which looks a sizeable amount in the context of (say) the dairy payout, and the largest part is down to our cost advantage in getting into the Chinese market duty-free as a result of our free trade agreement (FTA) with China.
You can also see the contribution of the FTA in the graph below, also from McKinsey, where after a short post-FTA lag, our dairy exports to China took off. Aussie dairy exports didn’t. For completeness, I should add that McKinsey also credit the relative vigour of our dairy industry deregulation (“Australia…deregulated but without anything approaching the intent and ambition across the Tasman”, p35), which I agree with, and also admire the creation of Fonterra (“New Zealand created a dairy industry structure that was designed to compete globally”, and Australia needs “purposeful market design”, p36), which I’m more ambivalent about, but there’s no denying a big payoff from our free trade approach. 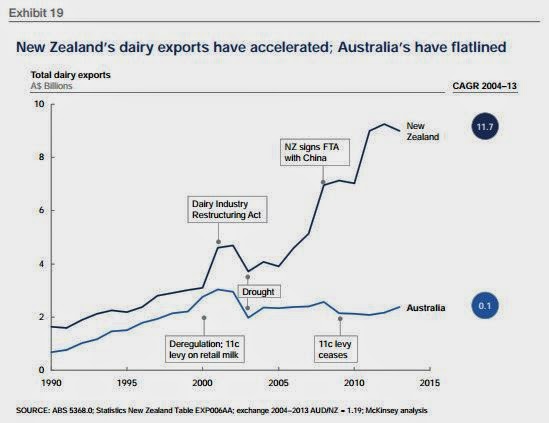 It’s not often that we steal a diplomatic march on our friends across the sea – well done, our trade negotiators – and we may not enjoy it for long: their Business Council is recommending that Australia get a move on with FTAs with China, Hong Kong and Taiwan, and revisit existing ones to make them more agriculture friendly. But while it lasts it’s a fine example of how free trade has brought a big benefit to one of our major export industries. And even if Australia levels the playing field, there will still be enduring pay-offs for both of us.
It’s also a good riposte to some of those ugly anti-China views that are surfacing in our election campaign.

0 Responses to “The payoff from a Free Trade Agreement”