Immigration continues to be a hotly debated topic in many countries, including New Zealand. A number of New Zealand politicians express somewhat negative, shall we say, views on the matter, in much the same way as they do on foreign investment in this country. These politicians play on fears that immigration takes jobs away from natives and imposes significant costs on taxpayers. Such ideas continue to shape electoral campaigns and policy discourses in many countries.

Economists have not been able to steer this debate much. Economic models emphasising the benefits of immigration for natives have typically neglected unemployment and redistribution – precisely the things voters are most concerned about. What happens if we introduce issues such as these into economic models of immigration? A new column at VoxEU.org by Michele Battisti, Gabriel Felbermayr, Giovanni Peri and Panu Poutvaara considers How immigration benefits natives despite labour market imperfections and income redistribution. Just from the title you can guess that Winston Peters wouldn’t be bring this piece up during the election campaign.

In our recent working paper (Battisti et al. 2014), we have introduced wage bargaining, search frictions, and a redistributive welfare state into a framework that still includes skill complementarities between immigrants and natives in production. Hence the traditional, and important, channel of gains for natives (skill complementarity) is introduced in a much more realistic world of frictions and redistribution that can make immigrants costly for natives. We have then calibrated the model to match the average statistics that we observe for 20 OECD countries. We have also simulated two ‘counter-factual’ scenarios:

(i) How does native workers’ welfare compare between the status quo and a situation with no immigrants (closed borders), and
(ii) What has been the effect on native welfare of immigration during the last 10 years?

They then go on to discuss “The relative labour-market performance of immigrants”.

Looking at the wages of natives and immigrants of similar skills across the 20 countries considered, some interesting regularities emerge. First, immigrants are usually paid less than natives with similar educational attainments. Second, unemployment rates are usually higher among immigrants.

Table 1. Migrants versus natives: Cross-country heterogeneity within the OECD 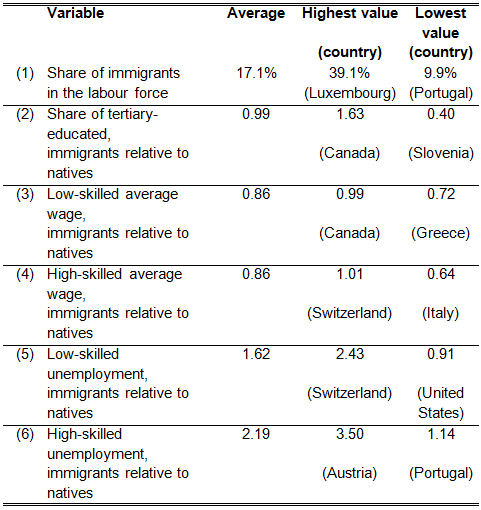 Rows 3 and 4 of Table 1 show that, within education groups, immigrants receive lower wages than natives, and the gap is particularly important in the low-skilled segment. Moreover, as shown on rows 5 and 6, high- and low-skilled immigrants alike are also more likely to be unemployed. These differences – even allowing for reasonable differences in productivity – suggest that:

(i) Migrants have worse outside options than natives, and so obtain lower wages through bargaining, and
(ii) They are more likely to be hit by job destruction shocks, and so are more often unemployed.

The next issue Battisti, Felbermayr, Peri and Poutvaara turn to is “How immigration can spur job creation”.

The introduction of job creation by firms – an important feature of our framework – generates two important effects of immigration. In particular, if firms cannot discriminate between natives and immigrants in the search process, but can pay immigrants lower wages (as is the case in the data), then the presence of immigrants drives up the average return from job creation. This encourages firms to create more jobs, some of which will be filled by natives. However, if matches with immigrants are more likely to break (as implied by their larger unemployment rate), the expected return to job creation is lower and firms will create fewer jobs. Which channel dominates depends on the relative strength of each mechanism. This can be simulated by our model once we have carefully calibrated its parameters on the data. 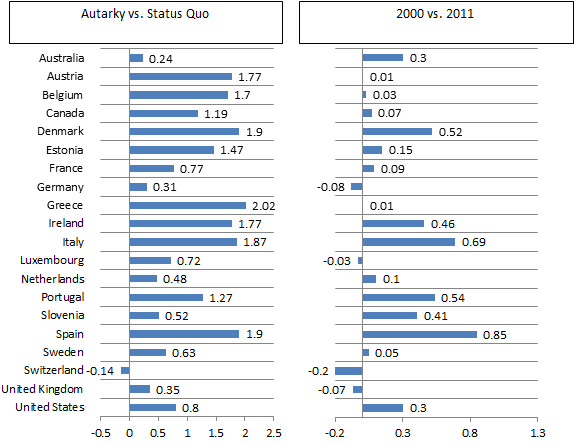 We calibrate our model to match the empirical moments for the 20 OECD countries shown in Table 1. Besides the relative labour market performance of immigrants, we also match facts on public spending, letting the government finance public goods and unemployment benefits by proportional taxation. We also match GDP per capita and average job durations for both educational groups.

Figure 1 presents results from two main scenarios. In the first, we calculate the difference in welfare (which can be also thought of as the difference in real post-tax income) between the status quo observed in 2011 and a hypothetical situation with no immigrants (closed borders). We find that the native welfare gains from immigration are positive in 19 out of 20 countries. In all countries but Switzerland (where the effect is essentially zero) natives have, on average, gained from immigration, and sometimes the gain is rather large (up to 2% of after-tax income). In the second scenario, we compute the difference in welfare of natives between the status quo in 2011 and a hypothetical situation in which the immigrant share had been kept at the level of 2000. We find a positive gain from this recent immigration in 16 countries.

In 14 out of 20 cases, the existing stock of immigrants makes both skill-groups of natives (college and non-college educated) better off. In the canonical model without labour market imperfections, these Pareto gains would be impossible. Moreover, even incumbent immigrants are found to be better off with immigration. Again, in the canonical framework this is extremely unlikely, as new immigrants are more closely substitutable with incumbent immigrants than with natives. The reason for these somewhat surprising results is the job-creation effect described above. Namely, immigration can grease the wheels of the labour market by affecting job creation incentives.

So what, you may ask “What explains the cross-country heterogeneity in benefits?”

The comparative statics from our analysis reveal that the following country characteristics increase the native immigration gains from a one-percentage-point increase in the immigrant labour force share:

The intuition is as follows. Lower bargaining power for immigrants implies that they have lower wages, and this encourages firms to create more jobs. Also, lower job-destruction rates for immigrants make hiring an immigrant more valuable for firms and encourage firms to create more jobs. A more generous unemployment insurance system makes immigration more beneficial for natives because higher unemployment benefits reduce job creation, and immigration helps to alleviate this distortion. In other words, the greasing-the-wheels effect and its lowering of the unemployment rate are particularly valuable when distortions are large. A higher share of tertiary-educated immigrants and lower government expenditures increase the benefits because they lower the extent of redistribution from natives to migrants.

So what conclusions can we draw from this?

Our analysis shows that immigration into imperfectly competitive labour markets need not be worsening labour market outcomes for natives. Instead, it can improve the job creation incentives of firms. Thus, measures that aim at eliminating the immigrant–native wage gap may hurt natives. This positive effect is threatened if immigrants are too often unemployed or if too many of them are unskilled. Policies reducing the rate of job loss for immigrants would therefore help natives. Finally, in contrast to widespread belief, immigrants do not seem to hurt low-skilled natives, even in the more realistic framework developed here. This is because immigration is often balanced between more and less educated, because its job-creation effect can help, and because redistribution towards immigrants is not as large as often suggested in the debate.

So, in short, immigration can be good for you. It also suggests that some kinds of inequality (the immigrant–native wage gap in this case) can have positive effects and, perhaps most importantly, immigrants do not seem to hurt low-skilled natives. Just don’t tell Winston.