Stats came out today* with the latest immigration numbers for the year ended July, and they showed that the country gained 41,044 people over the past year, a near record level (the record is the net inflow of 42,500 in the year to May 2003).

Like a lot of these numbers, the net result is the difference between two surprisingly high numbers: total arrivals were 102,396 and total departures were 61,352. As I said the other day, behind ‘net result’ numbers there is often a very large degree of churn, with large inflows and flows that are sometimes many, many times larger than the net outcome. So it’s not the case that 41,044 people upped sticks and came here: rather, 163,748 people were coming and going between New Zealand and the rest of the world, and rather more of them arrived than left.

The reason the net figure has risen to a near record, by the way, is that both arrivals picked up and departures eased off, so our net gain rose from the 10,600 of the July ’13 year.

No doubt the xenophobes and other crazies won’t be happy, but I think this is excellent news. Personally, I like the non-economic social benefits that immigration tends to bring, but even if you put those to one side, the economics of immigration says, we win. The latest economic research on the impact of immigration shows that it tends to be good for the receiving country. You can read all about it in this post on Paul Walker’s excellent Anti-Dismal blog or you can read the authors’ own summary here, at the always interesting Vox site. In sum, “In two-thirds of the 20 countries analysed, both high-skilled and low-skilled natives would benefit from a small increase in immigration from current levels”.

And even if you think, well that’s just one research paper, the reality is that a large majority of economists look on immigration as benefiting the host country. Here are the answers to a survey question that the Centre for Macroeconomics sent out earlier this month to a panel of UK economists (you can read the full thing here). 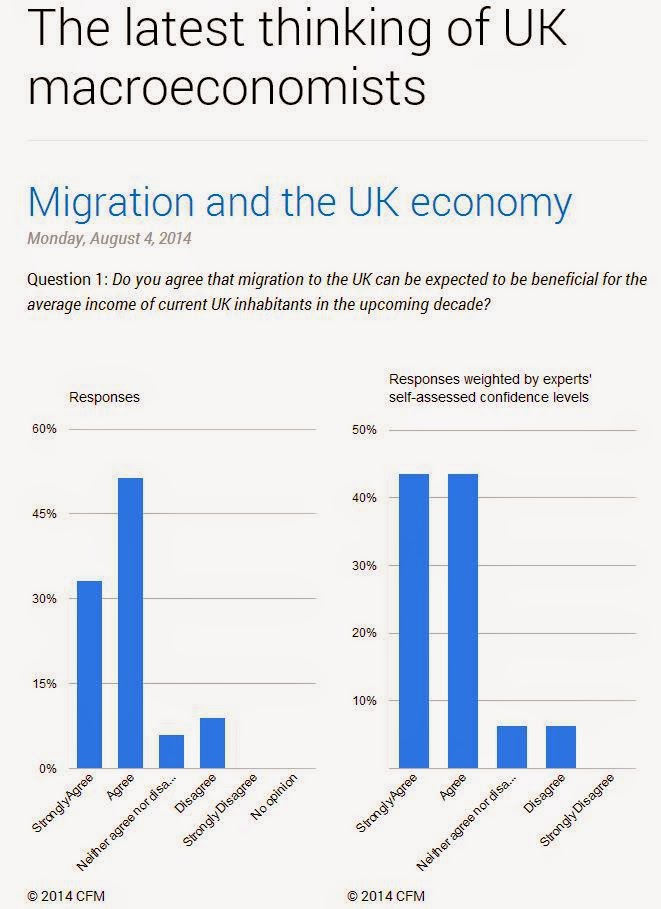 As the authors summarise it, “there is overwhelming support for the view that migration will increase the average income of current UK inhabitants”.  There was also overwhelming support, by the way, for the idea that the UK was making a complete hash of its immigration policy and processes, but that’s another story.
There’s enough lunacy in the pre-election air already without some immigration myths adding to it, so if you hear some politico ranting and raving, take a deep breath and repeat slowly to yourself: no, immigrants don’t take jobs from nationals. And no, they don’t drive down local rates of pay.