Nolan rightly hits on a bit of chicanery in reporting on BERL’s policy costings for the Greens:

Investing to maintain real spending
This one is genuinely disappointing as it seems to be an almost explicit misinterpretation of Budget forecast figures.
The numbers for claiming falling real expenditure come straight from the Treasury forecasts here, but are then deflated.  This sounds good on the face of it, and people do this all the time.  However, it ignores that there is both unallocated spending, and allowances for additional spending in future Budgets – both which largely get allocated to Health and Education on the day.
It is an “open” secret that the Health and Education numbers work this way – as both Labour and National want to announce increases in spending on these items on the day. [Note: It is just like “tax cuts to get rid of fiscal drag” – political marketing all the parties do].

Now BERL is likely aware that the Budget Economic and Fiscal Update leaves out that unallocated spending. It’s right there in the darned table. Here: 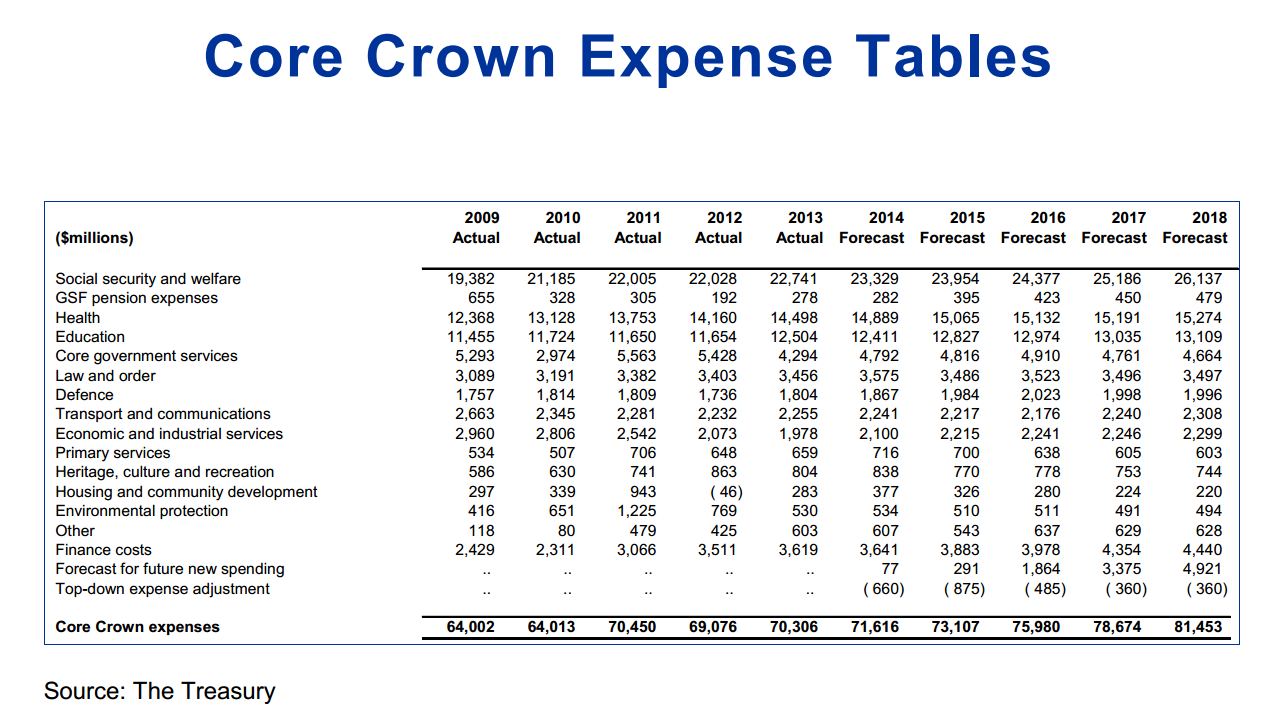 So what do we have here? For each line, we have the expenditures by spending area. For example, health rises from $12,368m in 2009(actual) to $15,274 in the 2018 forecast. BERL then goes and deflates that by expected inflation; the Greens then claim that there’s a real cut in spending.

When BERL runs its inflation adjusted accounting on Core Crown Expenditures, it finds a 9.9% nominal and 2.8% real spending increase over the next three years. That total Core Crown Expenditures category includes the future spending increases. Those future spending increases have not been allocated across spending categories. If it were allocated proportionately across all categories, the weighted average of the different categories’ increases would wind up being 2.8% real. But BERL doesn’t assume that. It just takes each line from the BEFU and inflation adjusts it while ignoring the forecast future new spending.

Nolan is right. And it’s worse than that. Nolan points to the 2013 Note 8 adjustments to BEFU. The 2014 table above has the forecast increases right there in the same table where BERL would most likely have pulled its data. It would be really hard to miss it. And if you didn’t miss it, it would be really hard not to know that it would be really misleading to run a deflation adjustment without incorporating future expected spending increases where some of those increases would be to offset future inflation!
The forecast new capital spending and unallocated contingencies are in the 2014 Note 8 adjustments; there’s another $2.5 billion in forecast new capital spending by 2018. None of that’s included in BERL’s accounting.
Nolan’s evaluation, noting that he’s an Infometrics economist who hadn’t worked on the report:

One thing I will point out, after reading the Infometrics report for the first time, is that they don’t say the things in the Green’s summary – but if you do a costing for a party, that is the way they will sell it.  The BERL tables on the other hand do imply what the Greens take from them – and that is very disappointing as they are misleading.

So the Greens put the best spin they could on the Infometrics numbers, as would any other party. But they could have been misled by the BERL tables. And that turned into some very erroneous headlines for the Greens, and some embarrassment when the Minister of Finance used a yellow highlighter to point them to what BERL failed to notice:

I love that our Minister of Finance will come in and correct these kinds of things, or at least somebody in his office on his behalf (who knows whether he runs his own Twitter account).

It looks like Russell Norman honestly believed that there was no provision for future spending. I wonder whether he’s satisfied with the advice he received.