There are still lots of people who are in two minds about our big burst of deregulation – ‘Rogernomics’ – in the second half of the 1980s and first half of the 1990s. Even the name suggests that it might have been the Frankenstein-like work of one individual crazed zealot – though the reality is that most OECD countries were doing the same. Indeed, lots of countries started earlier than we did, did more, and kept on doing it long after we’d called a halt. And if we ended up having to do a lot in a short period of time, it was because there was a lot to do after the fossilised days of Kirk, Rowling and Muldoon. Our more flexible and efficient competitors were scampering off into the distance, and ultimately we had to run very hard to try and close the gap.

Why are we having all this potted history of a Friday afternoon?* Because I’ve just read a very interesting paper that looks at the payoff from doing all this sort of thing; because I’m aware that there are closet re-regulators who’d like to go back to some of the bad old ways, because there are plenty of folks who don’t want to finish off the last bits of unreformed business; and because it ties in with some recent work our Productivity Commission produced.
Their big report into the services sector noted that a lot of our manufactured and commodity exports actually embody a lot of services – they have the example of the value of an export log, which is basically 50% a log and 50% assorted services used in getting it to the ship and ending it on its way – so the relative efficiency and competitiveness of our domestic services sector and of our domestic infrastructure can have a big influence on the relative competitiveness of our exports overseas. If our exporters have to use relatively expensive lawyers or accountants, or have to buy relatively expensive electricity or use relatively expensive airports, they’re at a competitive disadvantage (I’ve posted about some of the report’s pro-competition suggestions here, and also posted about New Zealand’s high services prices here and here).
This research I’ve just read looks at Spain – there’s a summary here at the Vox site, and here’s a link to the full article.
In brief, the research looks at the quantity of a variety of services (energy, transport, communications, professional services) used by the different Spanish manufacturing sectors. And then it uses some OECD data on the degree to which regulation of these sectors in Spain became more market-friendly between 1991 and 2008 to do a ‘with and ‘without’ comparison – they compare what Spanish manufacturing exports would have been if the degree of regulation had stayed at its (user unfriendly) levels of 1991, with what actually happened in a progressively more liberalised economy.
For some reason which eludes me, the authors didn’t put the most startling result of all in the summary paper, so here it is. 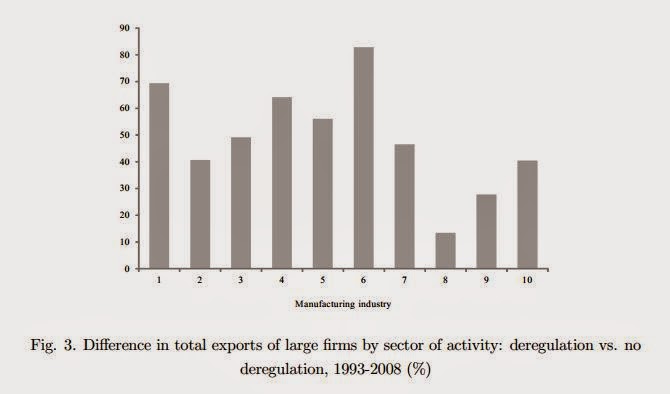 The positive impact of deregulation and liberalisation of the Spanish services sector on manufacturing exports is enormous. As the authors put it on p16 of their research, “The figure shows that the effects of lower service regulation on downstream manufacturing exports were sizeable: from the smallest gains recorded in electrical and optical equipment (13.4%) and transport equipment (27.7%) to the largest gains recorded in chemicals (64.2%), food products (69.4%) and other non-metallic mineral products (82.9%)…the industries that benefited the most of [they mean ‘from’] lower service regulation were typically more dependent on service inputs”.
The big result, in sum, is that deregulation does what it says on the tin – it allows the economy to become far more competitive.
There’s also another lesson. That OECD data the Spanish researchers used includes us, so we can see how we’re faring in terms of production-friendly regulation and infrastructure networks compared to other places. And the story is that while we’re reasonably good by world standards at a lot of this, we’ve stopped improving in some areas, while others are still reforming. We’re losing competitiveness.

We’ve left a lot unfinished. And it’s going to cost us unless we fix it.

0 Responses to “The payoff from deregulation”