Yesterday evening* in Auckland we had another interesting Law and Economics Association (LEANZ) event, with Max Rashbrooke talking on ‘Inequality in New Zealand’, largely based on his book Inequality: A New Zealand Crisis, published by Bridget William Books last year. Max is a fine presenter, and he’s also got an interesting website (a joint project with the New Zealand Council for Christian Social Services), Inequality: A New Zealand Conversation, which among other things includes a calculator where you can figure out where you lie on New Zealand’s income distribution. You may have also seen it on the Herald’s website, where (according to Max last night) it rapidly got 100,000 hits.

As the hitcount shows, inequality is clearly much further up the public agenda than it used to be, partly influenced by work along Max’s lines and partly propelled by the various debates set off by Thomas Piketty’s Capital in the Twenty-First Century.

My own take – as I’ll be explaining in another forum shortly so I’ll keep it brief here – is that I can understand some focus on inequality per se, and particularly the inequality that’s left after we’ve taken account of the impact of the progressive income tax and social welfare systems, but I’ve always been more concerned about inequality of opportunity than I am about inequality of outcomes.

I’m having to reconsider that a bit, though: as Max said last night, and others have also argued, you may not be able to separate out the two concepts of outcomes and opportunity so neatly. It’s possible (for example) that high inequality might reduce a country’s rate of growth, which is a bit of a problem for us fans of equality of opportunity: maybe a deeply unequal society can’t generate the high rates of growth that equality of opportunity enthusiasts would champion as one of the best ways to help those at the bottom of the income ladder. Standard & Poor’s for example came out recently with a report that said precisely that about the US economy: “Standard & Poor’s sees extreme income inequality as a drag on long-run economic growth. We’ve reduced our 10-year U.S. growth forecast to a 2.5% rate. We expected 2.8% five years ago”.

There’s also a line of argument that says inequality actually interferes with people’s ability to take fair advantage of opportunities. Here’s what’s been catchily called The Great Gatsby Curve (originally by Alan Krueger, chairman of the Council of Economic Advisers in the US, in 2012). This version comes from a Canadian economics professor, Miles Corak, who updated the original graph with more countries. You can find his write-up here at his website. Max also put a version up as a slide yesterday. 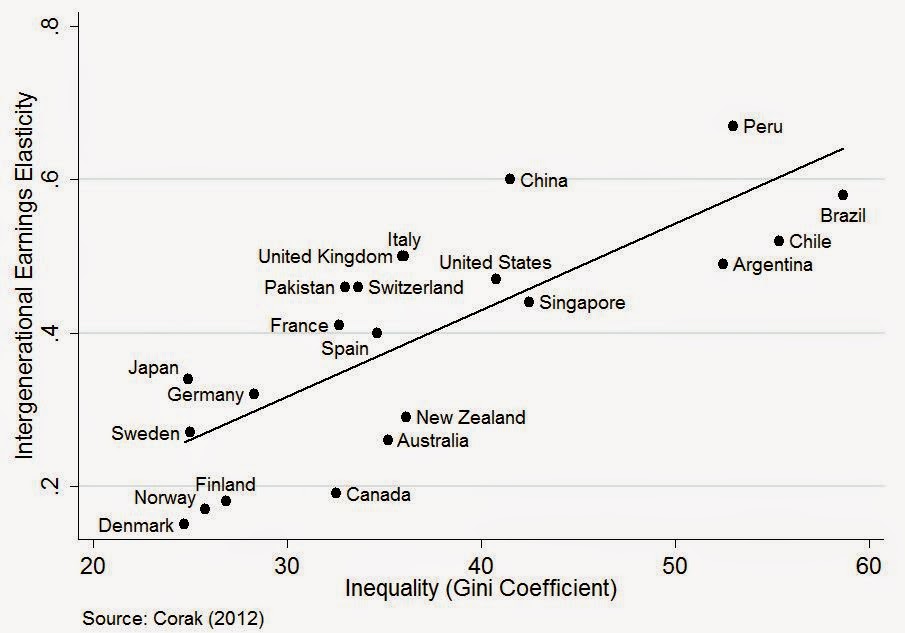 If you haven’t seen it before, here’s how it works. The horizontal scale is a country’s income inequality, as summarised by its Gini coefficient: the further to the right, the more unequal. The vertical scale is a bit of a mouthful, but what it means is the percentage of a person’s earnings that can be explained by their parent’s earnings, so it is a measure of intergenerational mobility: the further up the axis you are, the more parents’ income determines their kids’ outcomes, so the less mobile a country is.

What you get is an overall pattern where the more unequal countries tend to be the less intergenerationally mobile. We, and Australia, don’t show up too badly, by the way: we’re a bit above the median level of inequality in this particular sample of counties, but on the other hand we’re more open than many. We have much the same level of income inequality as Spain, the UK or Italy, but parents’ income explains far less of our children’s incomes than they do in those countries.

There are those who would make a strong argument from this graph – that it’s the inequality that is causing the lack of mobility, and in turn that would tend to take you down a policy route emphasising redistributive policy.

I don’t think that’s necessarily true: I’m rather inclined to view both these outcomes (inequality and immobility) as caused by a third factor again, namely the social and economic openness of a society. In the UK you’ve got the class system; in much of continental Europe you’ve got insider/outsider labour markets. I’d still be tempted to bang away at those sorts of barriers to equality of opportunity: as far as I’m concerned, you can jack up the progressivity of the income tax system all you like, but it’s not going to make a blind bit of difference to the career prospects of the young Arab girl in a French slum.

In any event, you can see the sorts of interesting ideas that arise at these LEANZ seminars. So sign up with LEANZ – you can do it here – it’s a charity and can do with the subs and any spare donations you care to make. And if you’ve got any ideas you’ve been wanting to share, these seminars are a great opportunity to take them out over the fences (my hands are clean – here’s a write-up of the LEANZ presentation I gave a wee while back).

Thanks finally to Ed Willis at Webb Henderson who organised the event and provided the premises and the drinks and nibbles.