Post-election, thoughts have turned – finally – to policy. It’s reported in the Herald that among the likely policy initiatives over the next three years, John Key “identified progress on a trade deal with South Korea, which is close to a conclusion, and the Trans Pacific Partnership as priorities”.
A bilateral deal with South Korea is definitely a good idea: I know, in an ideal world we’ve have comprehensive multilateral trade agreements, but it’s not an ideal world, and take what you can is the order of the day. These bilateral agreements can be quite handy: our agreement with China, for example, gave us a clear competitive advantage against the Aussies in the dairy trade with China (as I wrote up here).

Whether the TPP ever gets off the ground, and whether it will in fact be a genuine free trade agreement, is anyone’s guess. There have been leaks about the negotiations that have raised suspicions of TPP as potentially protectionist of US intellectual property, rather than helping to free up trade, and I’ve also seen speculation that the Japanese will make sure that any agricultural trade liberalisation in the TPP will get watered down to meaninglessness.

One worry I’ve got is that a ‘bad’ TPP will taint the arguments for free trade, which tend to struggle at the best of times against the loud voices of anti-trade ideologues and of formerly protected interests. The voice of the family buying cheaper T-shirts and food tends not to get much of a look in.

So I thought I’d just point to some new research about one of the big free trade deals – NAFTA, the North American Free Trade Agreement of 1994. At the time the usual suspects came out in force against it: you might remember Ross Perot running for President in the US in 1992 on fears of the “giant sucking sound” of American jobs going down the gurgler towards Mexico (and finding nearly 20 million American voters to agree with him).

The latest research comes from the Peterson Institute for International Economics in Washington, “a private, nonprofit institution for rigorous, intellectually open, and honest study and discussion of international economic policy…The Institute is completely nonpartisan”. The summary is here and the whole thing (pdf) is here.

How did this contentious agreement work out? Pretty well, as it happens, though one of the lessons is that proponents of freer trade need to be more realistic about the payoffs: it’s not just the opponents that can go off the deep end. That said, the benefits were real: look at this. 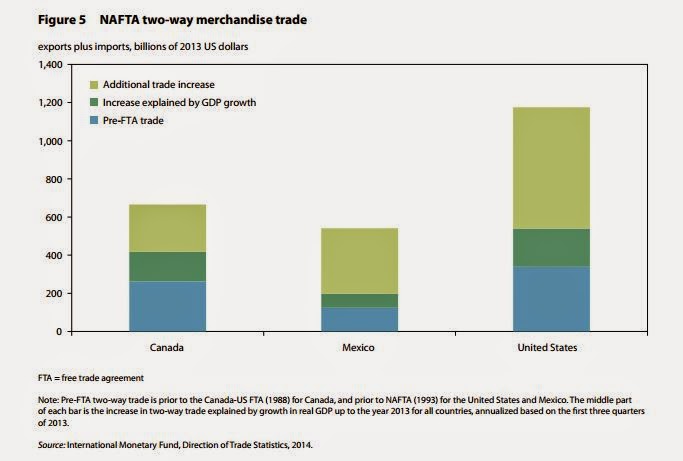 This shows the initial level of  goods trade between the NAFTA countries (blue), the extra trade that would have happened in any case as the NAFTA economies grew (dark green), and the impact of NAFTA (light green). Trade was basically twice as large as it would have been without NAFTA. That’s a bit of a heavy-handed summary on my part,  and the authors are more nuanced, but the guts is that trade got a large boost.
This increased trade in turn fed through into higher incomes everywhere. As the authors say, these higher levels of trade boosted GDP in all the countries involved (I’ve left out the footnotes):

Ample econometric evidence documents the substantial payoff from expanded two-way trade in goods and services. Through multiple channels, benefits flow both from larger exports and larger imports. As a rough rule of thumb, for advanced nations, like Canada and the United States, an agreement that promotes an additional $1 billion of two-way trade increases GDP by $200 million. For an emerging country, like Mexico, the payoff ratio is higher: An additional $1 billion of two-way trade probably increases GDP by $500 million. Based on these rules of thumb, the United States is $127 billion richer each year thanks to “extra” trade growth, Canada is $50 billion richer, and Mexico is $170 billion richer. For the United States, with a population of 320 million, the pure economic payoff is almost $400 per person.

The same is true of the proposed agreement with South Korea, as MFAT’s briefing page on the negotiations points out:

An independent joint study into the benefits and feasibility of an FTA was completed in 2007. It found that New Zealand and Korea are two of the most complementary economies in the Asia-Pacific region and that an FTA would deliver economic benefits for both countries. The analysis, by the New Zealand Institute for Economic Research and the Korean Institute for International Economic Policy, suggested that the FTA would provide gains to real GDP between 2007 and 2030 of US$4.5 billion for New Zealand and US$5.9 billion for Korea.

Opponents of trade liberalisation, in short, would take US$10 billion of benefits from a Korean agreement alone, and scatter them to the winds.