I’ve been engaged in a bit of tweeting to and fro about the rise in New Zealand’s government debt in recent years, and what’s behind it.
The background is that there’s been a fair bit of political point-making going on about the large rise in debt on National’s watch, with some people arguing that National seems to have got the kudos for responsible economic management while simultaneously presiding over a very large rise in government indebtedness.

Personally I don’t care for or about the political point-scoring, and my take on it is that practically any New Zealand government, of virtually any political persuasion, would have ended up doing what National found itself doing – supporting the economy in the grim days after the GFC hit, and paying to rebuild the infrastructure destroyed by the Canterbury earthquakes. And there would have been a lot of completely appropriate questioning along the lines of ‘have you forgotten the lessons of the Depression’, and ‘does the name John Maynard Keynes mean anything to you’, if there hadn’t been that support. I don’t reckon there was a great deal of policy leeway for any incumbent government in these very unusual circumstances.
But it’s kind of hard to make any kind of fact-driven argument in 140-character bursts, so I thought I’d take a bit of space to deal with one strand of the debate, namely how much of a fiscal boost did the government provide to the economy in the wake of the GFC.

Here are Treasury’s estimates. They come from the ‘Additional Fiscal Indicators‘ document which was part of the 2014 Budget Economic and Fiscal Update. The ‘fiscal impulse’ shown in the graph is the size of fiscal policy changes, measured by changes in the true underlying surplus or deficit, when you’ve taken out any cyclical effects affecting it. Bit of a mouthful, I know, but there you are.
What is shows is that there was a big boost to GDP, of the order of 3.5% of GDP, in the year to June 2009, and another fairly sizeable one, of about 1.75% of GDP, in the year to June 2010. In money terms, that’s about $6.5 billion in the June ’09 year, and about $3.4 billion in the June ’10 year. Call it a round $10 billion or so for the whole package (you could probably add in a little more for another bit of fiscal support in the June ’11 year). Formally, yes, $10 billion worth of fiscal boost occurred on National’s watch over the two years, but I think it a very high probability that something similar would have happened – and should have happened – no matter who was at the helm. 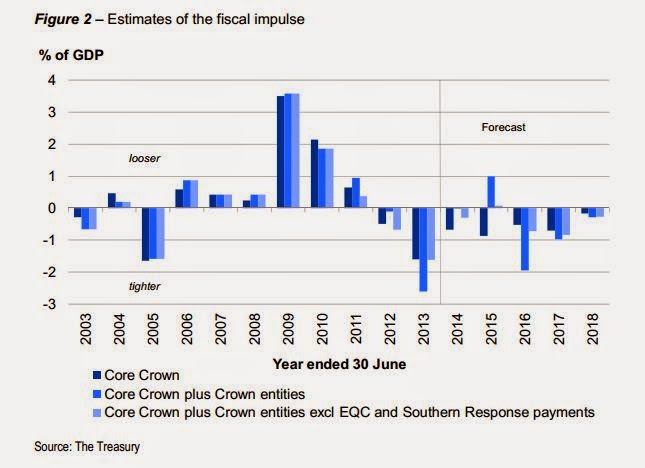 But there’s another way to see what might have happened if someone else’s hand was on the tiller, and that’s to look at what other governments did in exactly the same situation. So I’ve rounded up a bunch of the usual suspects and I’ve calculated the same ‘fiscal impulse’. These data come from the IMF’s World Economic Outlook database. Positive numbers are fiscal tightening, negative numbers are fiscal loosening.

You’ll see that nobody was doing a lot in 2005, 2006 or 2007. Then fiscal policy gets loosened a good deal in 2008 (we’re in the middle of the pack), even more again in 2009 (we’re again in the middle of the pack), and generally was loosened a bit more in 2010, where we let it rip a bit more than the others. You’ll note, incidentally, that at that point the UK took the ‘austerity’ route (a big fiscal tightening).
Over the three worst GFC crisis years, 2008-10, our cumulative fiscal boost was 6.7% of GDP, in the same ballpark as Australia’s 6.1%, and a bit more than America’s (5.6%) or Canada’s (4%). The UK had chosen a completely different tack, and was taking back support in 2010, so its cumulative boost was least, at 3.1%.
Bear in mind that these numbers, while looking precise, are very spongy indeed (as even their creators will tell you), so they only tell a broad picture story, and the overall story is that everyone loosened fiscal policy, and everyone loosened appreciably, with us and Australia doing a bit more of it than the others. On the other hand we clawed back a good deal more than everyone else in 2012, so there’s not a lot in it over a five year view (ex the UK). All of us took a distinctly Keynesian tack. So it’s kind of hard to argue that there was something distinctively National about our absolutely typical response. Ditto if it had been Labour at the wheel.

Finally I came across a nice picture of US fiscal policy, for those of you who like graphs more than tables of numbers. It’s from the Hutchins Center on Fiscal and Monetary Policy at the Brooking Institution. They call it their ‘fiscal barometer’, and you can see the original graph and read about the methodology here. It’s a broader measure than the ‘fiscal impulse’ calculations mentioned thus far, so the numbers tend to be a bit bigger when it comes to measuring the fiscal impact. You want to look at the dark blue line. 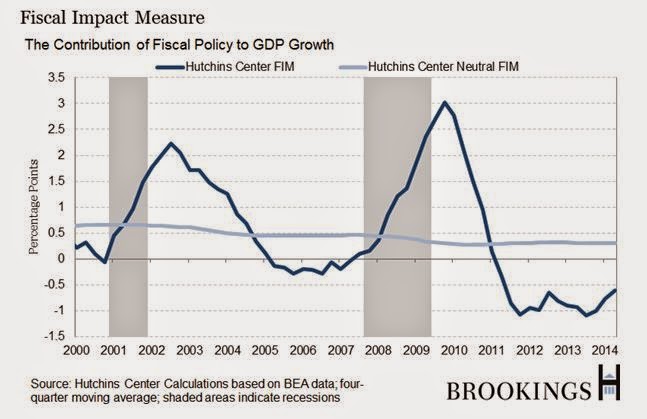 You’ll see that in 2007 US fiscal policy was not adding to GDP at all, shifted to a boost of around 1% of GDP by the end of 2008, to a boost of around 2.5% by the end of 2009, and peaked out at around 3% of GDP in 2010. That’s a total of about 6.5% of GDP – pretty much identical to our cumulative fiscal impulse over the same period.
Look at it any way you like, the answer keeps coming up the same. A lot of countries, hit with the same sort of shock, responded in much the same way and to much the same extent, and appropriately so. The colour of the political rosette on the incumbent’s lapel generally didn’t matter a damn, except later in the piece in the UK. There was nothing unusual about our part in the proceedings.

0 Responses to “Did we lose the fiscal plot?”