Last week the Australian Productivity Commission came out with a couple of reports, on the Aussie dairy trade (pdf) and on Aussie retailing (pdf). I wrote up the dairy one because it had various angles relevant to us, notably some discussion of our Fonterra-centred industry structure, a good smackdown of the ‘national champions’ idea, and some useful analysis of the economics of the global dairy trade.

I’ve only just got round to taking a squizz at the retail report, and it’s equally good. It points out, for example, that a lot of planning/zoning regulation can be both inefficient and anti-competitive, and that there’s a reasonably straightforward path to fixing both problems:

Two reforms have been identified as being of particular importance: first, the need to reduce the number of business zones and increase the permissible uses of land (to reduce prescriptiveness) within these zones; and second, to remove consideration of the effects on existing individual businesses from the approval process for development applications (to avoid anticompetitive outcomes) (p11)

The Commission is strongly of the view that state, territory and local governments can assist consumers and the retail sector by developing and applying zoning policies that ensure the areas where retailers locate are both sufficiently large (in terms of total retail floor space) and sufficiently broad (in terms of allowable uses, particularly those relating to business definitions and/or processes). This would allow new and innovative firms to enter local markets and existing firms to expand (p11)

As an example of how those reforms would work, the Commission had heard submissions about high rents being charged to retail outlet tenants by shopping centre owners, and while it noted that following best practice in leasing wouldn’t be a bad idea, it also found that “the root cause of most retail tenancy lease problems are unduly restrictive planning and zoning controls that limit competition and restrict retail space, particularly in relation to shopping centres. Addressing the latter would also resolve many of the problems in the retail tenancy market” (p12).

More generally, the report got me thinking about how far Australia, and New Zealand, have got with pro-growth, pro-efficiency, pro-competition deregulation. Because, as this report found, despite years and years of economic reform, there are still thickets of regulation that are absolutely bonkers.

Three examples. I’ll let them speak for themselves, other than to note the Aussie Commission comment (p113) that “In many cases, these [trading] rules are anachronistic and have no apparent rationale”. 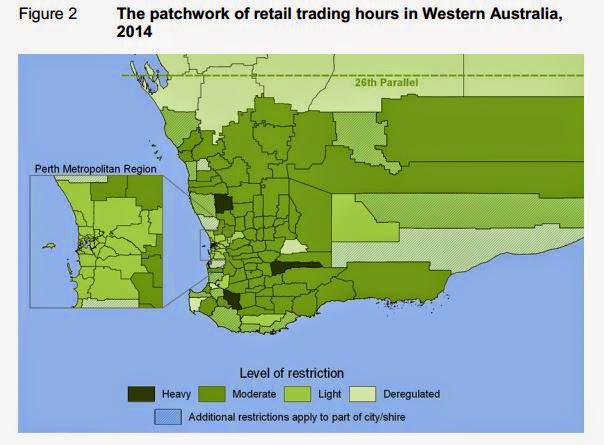 And here’s a decision tree on whether you’re allowed to open for business in Australia on Easter Monday (p114). 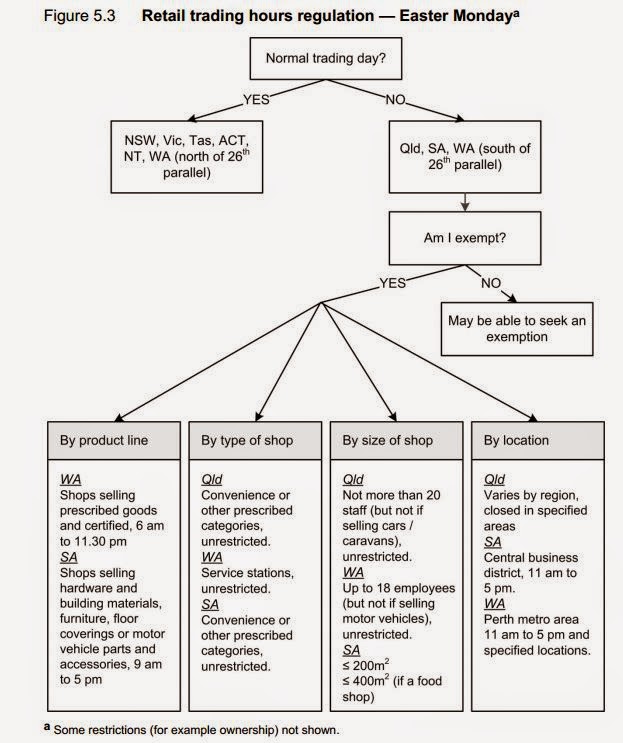 And here’s what Woolworths discovered about trading rules in Western Australia for its Masters Home Improvement Stores (which are like Mitre 10 or Bunnings Warehouse megastores):

in Western Australia, regulations prevent Masters Home Improvement stores from trading in line with the hours enjoyed by other hardware stores. To be eligible to trade as a ‘domestic development shop’ Masters must only sell those goods that are prescribed by the Retail Trading Hours Regulations 1988. The regulations prescribe a list of what a ‘domestic development shop’ can sell, which gives rise to all sorts of inconsistencies and anomalies. The regulations allow the sale of:
• light bulbs but not light fittings
• outdoor lighting but not indoor lighting
• kitchen sinks but not dishwashers
• wood-fire heaters but not gas heaters
• indoor television antennae but not outdoor television aerials (p10)

I suppose the good news is that both Australia and New Zealand now have Productivity Commissions that are able to turn over the flat stones and tell us what they’re finding underneath, and there’s the occasional one-off inquiry like Australia’s recent Competition Policy Review that has been doing the same thing (have a read here in particular). It’s good to know that there’s still some kind of following wind to keep the momentum of reform going.

But isn’t it strange, and a bit dispiriting, that after the best part of 30 years of progress in both countries, we’re still lumbered with this kind of malarkey. And while I suspect we may not be as bad as the Aussies on most shop regulation (though I could be wrong about the  Easter trading, where our regime is probably as chaotic as theirs), I wonder what we’d find if, for example, we turned over some flat stones of our own. I wonder what’s underneath the occupational qualifications one?