It’s been pretty clear that income inequality in New Zealand has been stagnant for at least the last decade or two. It rose in the late 80s and early 90s, but nothing much has happened since then.

And whenever I point it out on Twitter, against assertions from others that income inequality is worsening, I get replies that the problem isn’t income inequality but wealth inequality. I hadn’t seen great data on wealth inequality, so I couldn’t much comment. But we have some data on wealth growth and median wealth growth now from Credit Suisse. Everyone should read the report. Here are the important bits for the New Zealand debates.

First, New Zealand is far wealthier now than it was in 2000. Per-adult wealth is up by over 300% (a 100% increase is a doubling, a 200% increase is a tripling, a 300% increase is a quadrupling) over the period, when we evaluate wealth at current exchange rates: a high dollar means we are wealthier, no matter how much some groups want to make us poorer by devaluing the dollar. When we use constant exchange rates instead, wealth has more than doubled (the yellowish line). 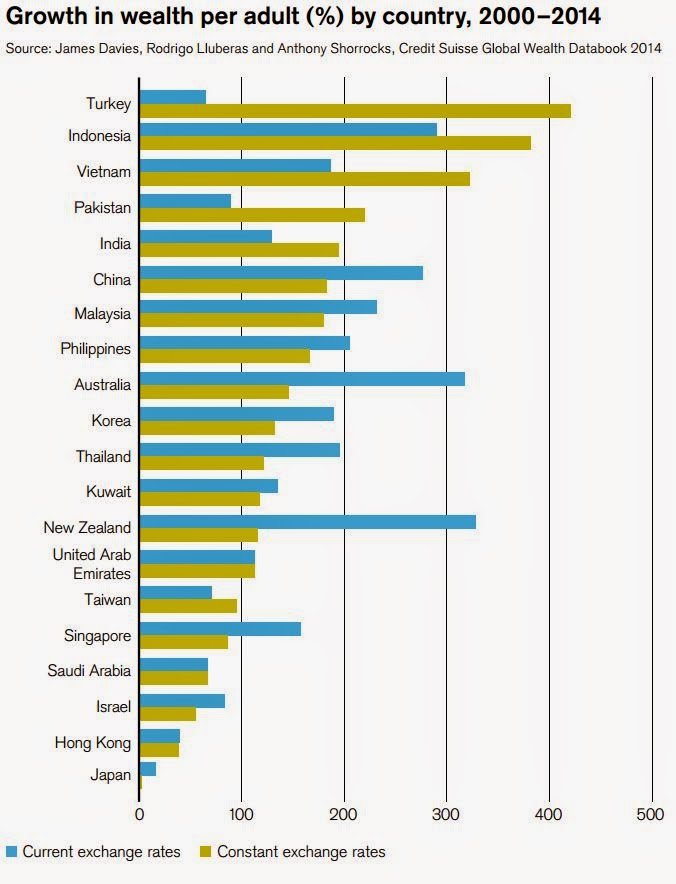 Per-adult measures, which I interpret as meaning an average, can be a problem though: what if all of that is because of massive gains at the top? We need medians. Medians are below. 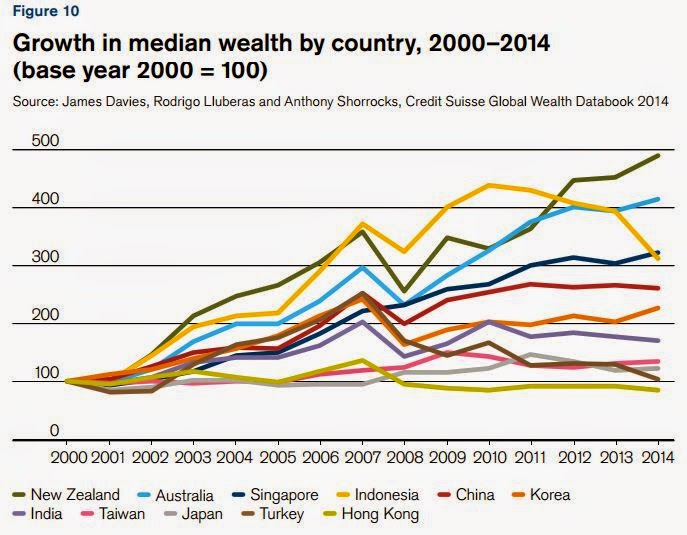 This is the one using current exchange rates rather than constant ones, so growth is overstated relative to constant exchange rates. Note that here the base year is 100, so our being nearly at 500 means a near quintupling of median wealth. Now it would be lower were we using constant dollars, but we can compare the current dollar mean rise with the current dollar median rise. If gains were accruing at the top, we’d see larger increases in means than in medians. If they were accruing at the bottom, we’d see bigger gains in medians than in means. And it looks rather like larger gains in medians.
This is then confirmed when we get out to Table 1, which lists New Zealand as a “Medium wealth inequality” country, along with Australia, Canada, Finland, France, Greece, Ireland, Italy, the Netherlands, Portugal, Singapore, Spain and the UK. I note that Denmark, Norway and Sweden rank as having higher wealth inequality than New Zealand.
The report then discusses trends in wealth shares of the top decile, by country, from 2000 through 2014. Their data doesn’t go back to the 80s and 90s, unfortunately. But over this period, New Zealand ranks as one of the countries experiencing a significant reduction in wealth inequality over the period. Their measure is the share of national wealth held by the top 10%. In 2000, the top 10% owned 62.3% of the wealth in New Zealand. This placed New Zealand as 19th out of 46: the top 10% had a smaller share of national wealth than was seen in the median country in the survey (19th lowest).
In 2007, the top decile owned 61.2% of the wealth; wealth inequality dropped slightly from 2000 to 2007. In that year, New Zealand had the 22nd lowest wealth inequality – about the median. In 2014, the top 10% owned only 57% of the wealth in New Zealand: a substantial fall. In 2014, we had the 12th lowest wealth inequality.
So, according to the Credit Suisse report:
Please update your narratives accordingly.