It’s another fine example of how using data collected for one purpose can be cleverly used by Stats for another – something that Stats has become quite adept at (and from casual observation, rather better at than many other national statistical agencies). In this case, it’s a rich data set: “The data includes price and quantity information, as well as information about the characteristics of individual products. This allows us to use sophisticated methods to measure price change”. In areas like electronic goods, where the grunt of the microchip or the amount of RAM or the quality of graphics is changing all the time, it can be quite hard to figure out how much of an apparent price rise is down to quality changes in the goods being bought. A laptop might have gone up 10% in price, but could well be effectively cheaper if you’re actually getting 20% more performance. With this rich data Stats can figure out the trade-offs.

The other interesting thing in the new improved CPI is the list of items being dropped from the CPI shopping basket. Here it is: it’s an interesting squint at the way we live now. The common theme is how new technology is making once ubiquitous products obsolete, with smart phones and tablets in particular dealing to a variety of other products. 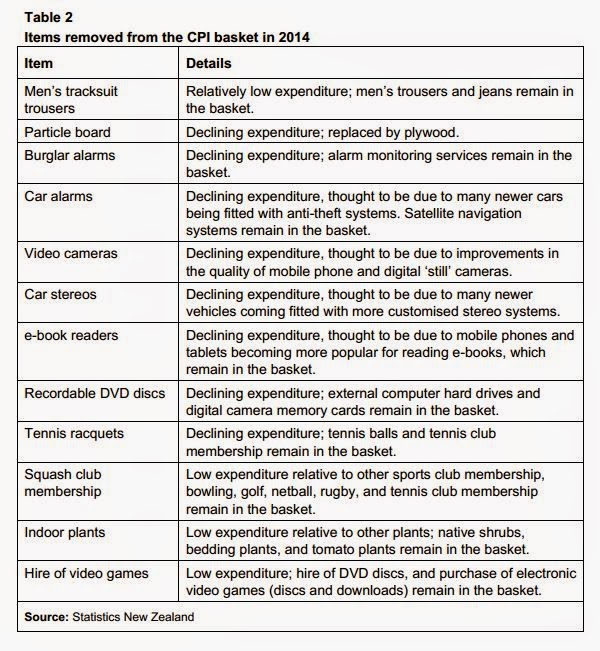 What’s gone into the basket? Pets, mainly – not because we’ve all suddenly decided in the past three years to become petowners when we weren’t before, but because Stats used to reckon that it couldn’t get a good price series for puppies and kittens, and now it reckons it can. Here’s the full list. 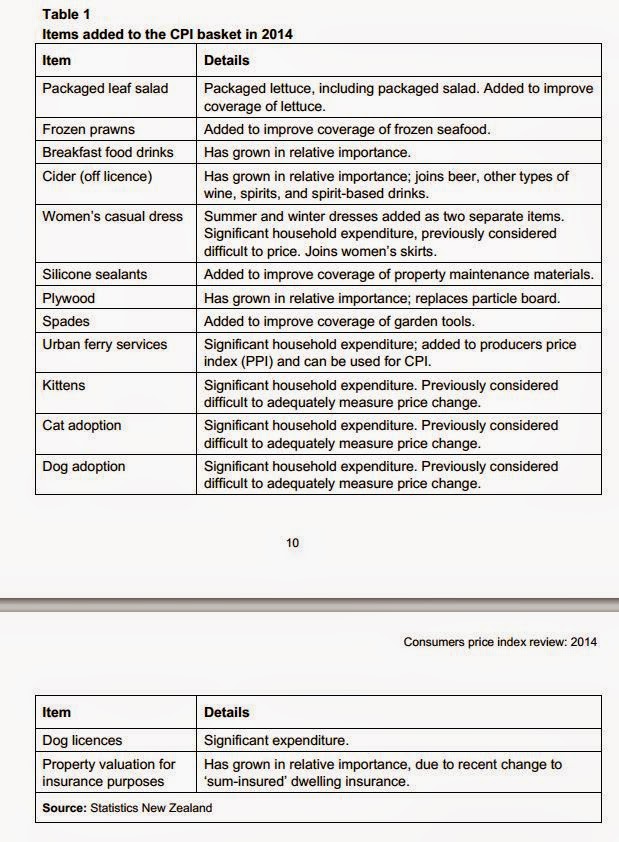 We’re apparently drinking more cider (excellent), using ferries more (good), but grabbing an UP&GO or similar as we rush out the door (not my ideal breakfast, though Sanitarium say it’s “a nutritious liquid breakfast range that’s designed for people who live life on the go” and that “Not only does UP&GO taste great, it’s also good for you”, so what do I know). And then there’s that damned post-Canterbury-quake nuisance, having to hire someone to get you an accurate fix on rebuild costs for your house insurance.
So it’s another interesting peek into changing lifestyles. Stats has been doing this for just over 100 years now, and it’s fascinating to look at the patterns. If you’ve never seen it, head over to ‘100 years of CPI‘, and in particular the link there to ‘100 years of CPI – Basket change‘, which is an “Interactive basket visualisation showing when selected goods and services were added or removed from the CPI”. It’s almost a complete social history in itself.
In food, for example, saveloys came into the basket in the drear 1970s (1974) but we progressively got our culinary act together, with fancier cheese (1988), avocado, courgettes, capsicums, fresh pasta (all 1999), and hummus and free-range eggs (2008), which is also when saveloys got ejected from the basket. And if you want a bit of “I don’t know whether to laugh or to cry” reminiscing – press the ‘Really?’ button, where you’ll see the rise and fall of the tinned herring, the waterbed, and, most poignantly of all, the Buzzy Bee toy.

0 Responses to “The way we live now”