Treasury’s latest Monthly Economic Indicators came out today.* Here’s a selection of some of the bits I found interesting.
First, the current growth cycle is still in good shape. The NZIER’s survey measure of firms’ trading activity in September suggests the economy was still growing at about a 3% rate. As I’ve said before, I love these survey measures: they’re quick, relatively cheap, and usually have dependable relationships with the big macroeconomic statistics. Looking ahead, prospects are still pretty upbeat, too. In the chart below I’ve shown firms’ hiring intentions, but I could as easily have picked firms’ expected trading activity or firms’ expected investment. It’s all good. 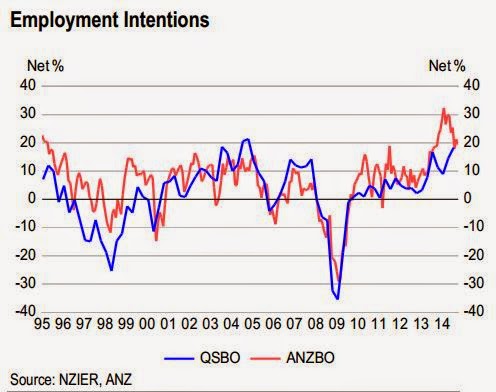 You might well feel that we’ve had a bit of a blow to our export incomes given the degree of attention that’s been given to lower world dairy prices, and while that’s true to a degree, as the chart below shows it’s not the whole story. For one thing, dairy products aren’t the only things we sell: overall export prices have been hanging in there. And for another, import prices have been falling (and may well fall quite a bit further, if world oil prices keep sliding), so our overall purchasing power – our terms of trade, what we can buy with our export income – has actually been rising sharply. 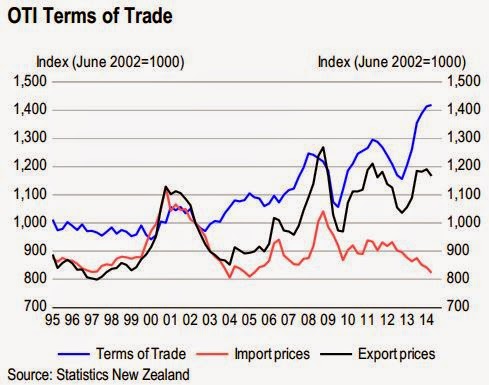 And finally there’s that unexpectedly low inflation rate that we’ve been having. As the chart below shows, there’s generally been a fairly close link between various survey measures of firms’ price setting and overall inflation, but over the last eighteen months or so actual inflation has come out lower than the surveys would have led you to believe. Some people have been climbing into the Reserve Bank for overestimating the likely inflation rate: well, don’t be too quick to rush to judgement. On the traditional relationships, they were making a sensible call. 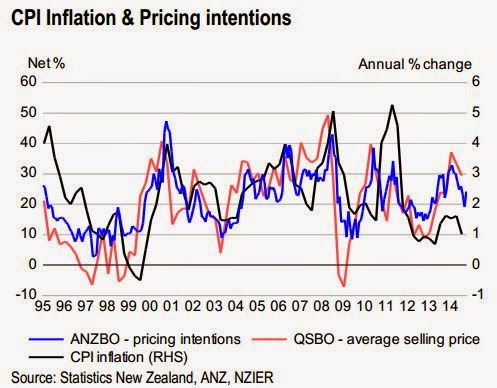 Why the relationship appears to have broken down, at least for now, is a big question, and one I’ll probably come back to, but we are not alone. In many places around the developed world, inflation is turning out to be lower than central banks were steering for, as the chart below, from this article in the Economist, shows: look where the dark brown marker lies relative to the bright blue one (or to the white range between blue markers). Another reason not to get too into finger-pointing at our RB: there’s evidently something happening at a global level here that’s blindsided a whole bevy of central banks (or whatever the collective noun for central banks might be). 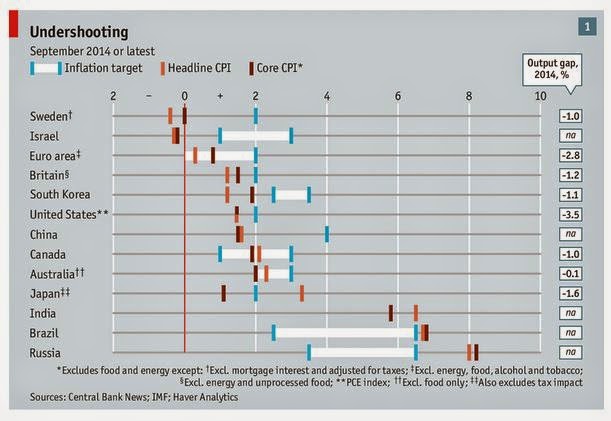