This chart, from the OECD’s latest Health At a Glance publication, is going the rounds of the social media, and it’s a bit of a reality check, in a good way. If you’d thought that we were all going to hell in a handbasket because of binge drinking, bad driving, obesity and all the rest of it, think again. 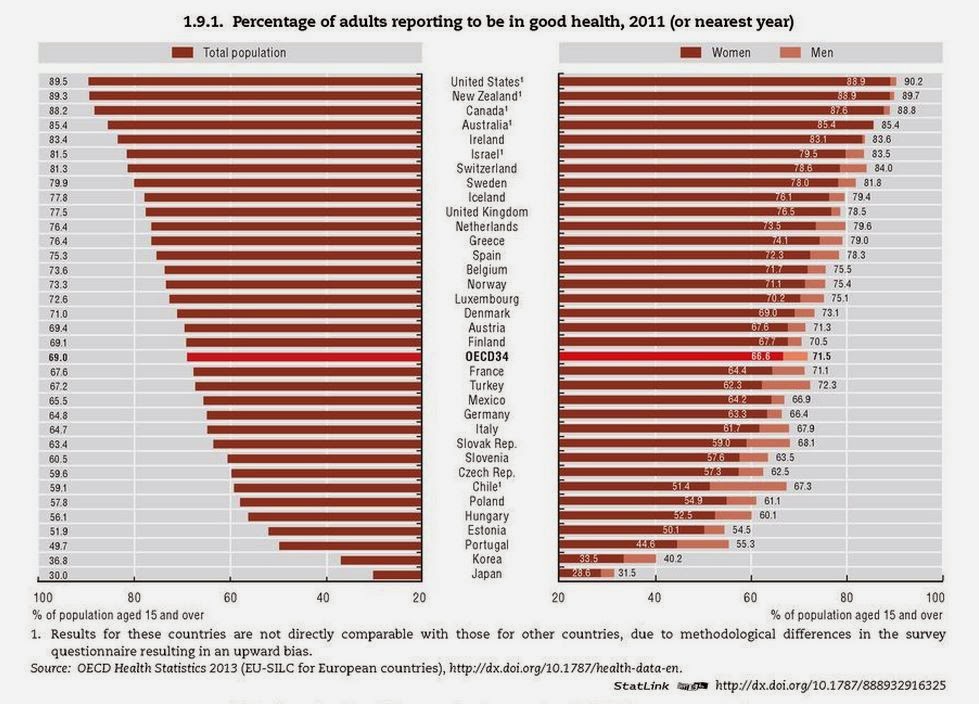 The graph shows people’s self-reported state of health, and we’re very near the global top. Even if you take off a positive bias for the way the question was asked in some countries (our score is 5-8% higher than it would be if measured the same as in most countries), we’re still well up there.

How people feel about their health is one reasonably important outcome, but if we go away from perception and look at some of the hard numbers, we stack up pretty well, too. Here’s life expectancy. 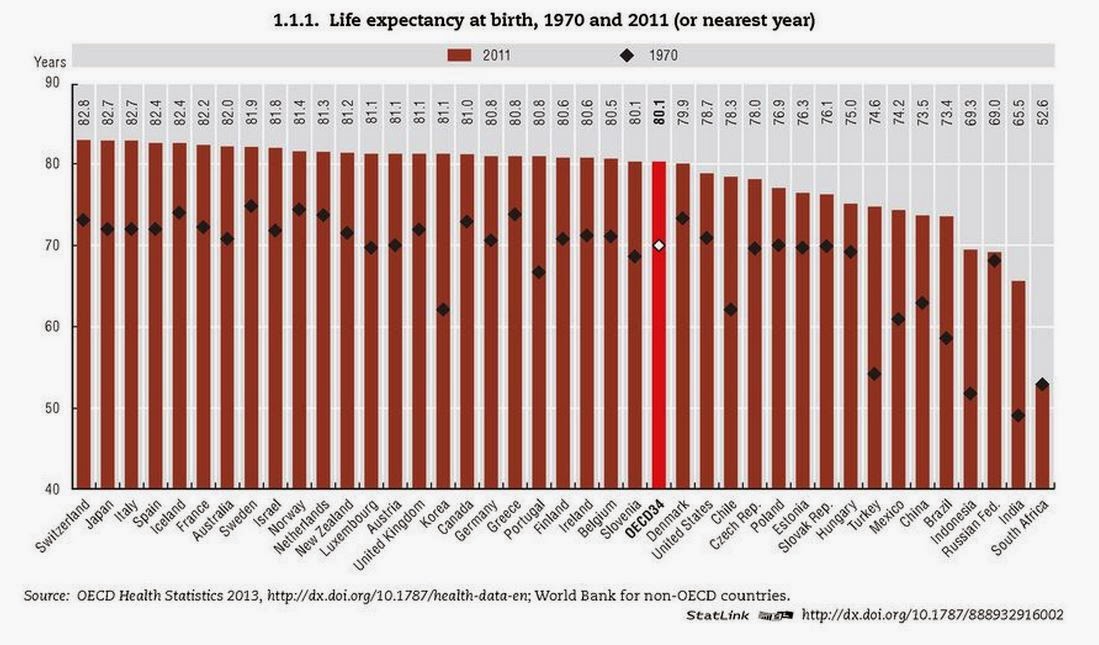 The wealthier OECD countries are all pretty much of a muchness, really, but again we’re in a pretty good place. Interestingly, as the next graph shows, we have much less of a gap in life expectancy between the well-off and the poor than exists in most countries. No idea why this should be, but there you go – another pretty good outcome. 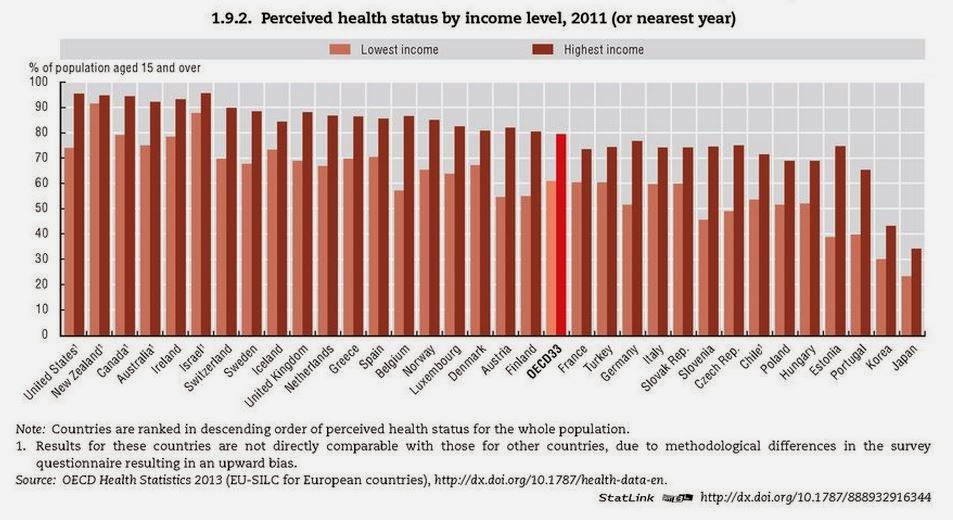 From an economist’s perspective, it’s interesting to see that we’ve got better health (measured by life expectancy) than you’d expect for a country of our income level, and better health than you’d expect for the amount we spend on healthcare, as the next two graphs show. In both cases you want to be north of the fitted black line, and we are. And it’s interesting to see that some of the stylised facts we all ‘know’ about global healthcare are, indeed, true, notably the hopelessly inefficient level of the health spend in the US. 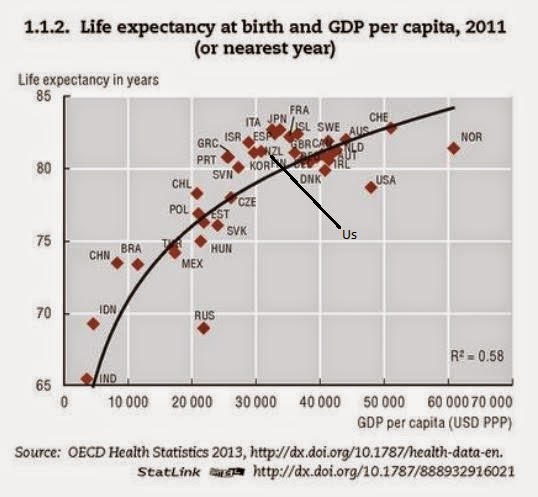 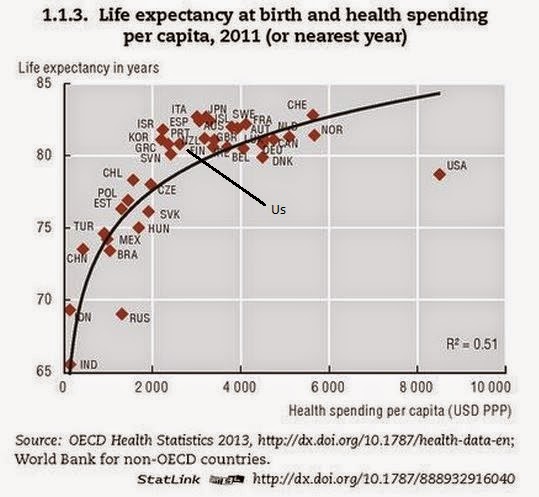 I know, I know, we could be even healthier again, and if we did a better job of managing the booze, the weight, the fags, the exercise, the diet and the heavy foot on the accelerator, we’d all be even better off. But at the same time we ought to take on board that as far as comparisons with countries like us are concerned, we’re already making a pretty good fist of health outcomes.

That “heavy foot on the accelerator” isn’t a random comment, by the way. I’m recently back from Ireland, where I couldn’t help noticing how much more polite and orderly the driving is than here in NZ. And it shows in these OECD stats, too: neither country is a smash palace along Brazilian or eastern European lines (and America doesn’t show to advantage, either), but Ireland’s death rate on the roads is clearly lower than ours. Which is something you could think about next time you cut me off on the motorway. 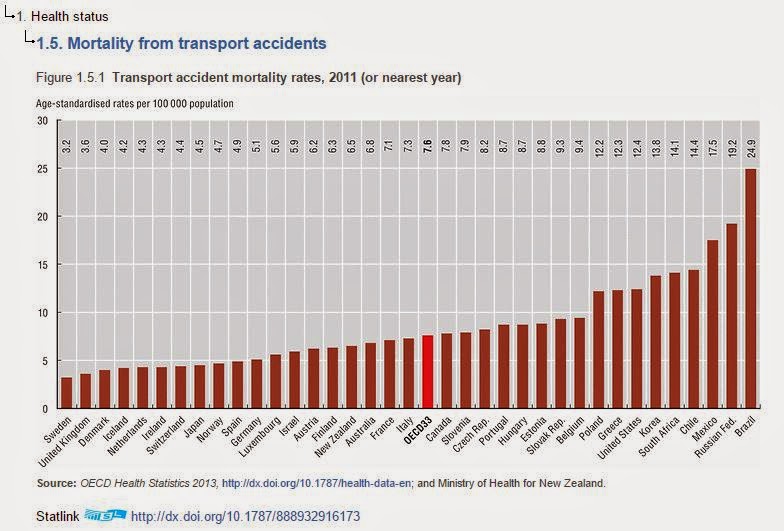