There’s been quite a bit of reaction in the social media to the news that ‘Poorly targeted’ school decile funding may be dropped. It’s not easy to make much of a case for anything in 140 character bursts, so I thought I’d take a bit more space to wonder if the case against decile funding isn’t being oversold.

Here’s some data, from the same article, which shows the percentage of students in different decile schools who are well below the national standard for maths (I gather you’d get the same picture if you looked at other subjects). What would you conclude from this chart? 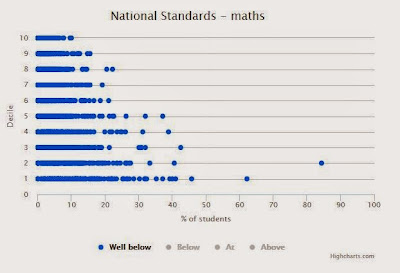 You’d have to say that there is some at least rough and ready correlation between decile level and school performance. Performance worsens as you move down from decile 10 to decile 1 (other analyses have found the same pattern). You’d be inclined to keep a school’s decile status in play as an explanatory factor, rather than junking it.

Since this is the picture after schools have had decile-related resourcing, you’d have to suspect that the relationship would have been even more pronounced pre-resourcing. You could, I suppose, make the argument that decile funding has been completely ineffective, and the relationship in the chart is the same pre and post decile-related funding, but that seems to me to be a big stretch to the rather unlikely counterfactual that funding levels make no difference at all to educational outcomes. There’s an even more unlikely possibility, that decile funding was counterproductive, and that the decile/performance relationship would have been less pronounced without greater funding to lower decile schools, but I can’t see how that would work, certainly not at any systemic national level. So you’d be inclined to believe decile funding has had some positive impact.

But self-evidently, the decile-related funding has not completely equalled out school performance. One part of the answer is that the link between a school’s socio-economic profile as summarised by its decile classification and a school’s performance isn’t 100%, and it’s unlikely that it ever could have been. So you’d be sympathetic to arguments that would tweak or supplement the decile funding system, though not to wholesale junking of the approach.

Another part of the answer, though, is likely variation in teaching quality at different schools. In the chart, there’s a clear pattern of poorly performing outliers at every decile level. It’s unlikely that all of that pattern is down to slippage in the relationship between decile level and educational outcomes, though some of it will be. For example, that outlier decile 2 school, the worst in the chart, could well be facing tougher challenges than most of the decile 1 schools, either because it got mismeasured in the decile process or because the things that matter outside the decile criteria weigh especially heavily on it (equally there could be schools that have been coasting, and their performance reflected an easier catchment challenge in reality than the decile ranking suggested). But some of it, as in most endeavours in life, is likely to be down to variations in the quality of the provider.

Either way, you’d be inclined to hone in on those outliers from two perspectives. One is that, if there is indeed something missing from the decile approach, and there seems to be, then these outlier schools are the most likely place to find it. And the other is that if they’re just bad schools, you’d want to sort them out.