Graeme Wheeler, the Governor of the Reserve Bank, gave a fine speech today* at a central banking conference in Wellington. It’s a fairly easy read, too, for the non-specialist, so best thing is have a go yourself. But if life’s too short, here are the two big points I’d take from it.

First, next time you hear politicians say, “why don’t we have a bit more inflation and a bit more growth, instead of the Reserve Bank holding us back all the time”, tell them they’re talking bollocks.

In other words, you can have it all – the same (or even marginally better) GDP growth, and lower and less erratic inflation. It’s not a trade-off over the longer haul.

Here’s the graph he put up to illustrate it. You can see, more or less, that the GDP growth rate picture is much the same before and after, and you can very clearly see that inflation is much, much lower and much, much less volatile. 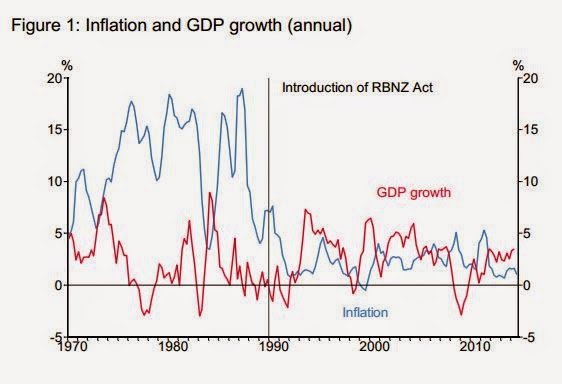 The other big point is about transparency and independence. Internationally, central banks have been getting much more communicative about what they are up to and why (though, as I noted here, the European Central Bank has been a slow learner), and have been given more independence from government. We score highly on this: as he said, “A recent international survey ranked New Zealand second among 120 central banks for transparency”.

Again, you’ll hear politicians trying to take back control of monetary policy, sometimes cloaking their eagerness to get their clammy electoral hands back on the interest rate lever in the language of “democratic control”.

Ignore them: what the evidence shows – as I found when I looked up that “recent international survey” that the Governor mentioned – is that more transparency and independence result in lower and less erratic inflation. The authors say (p236) that “Disentangling the impact of the two dimensions of central bank arrangements is difficult—not surprisingly, given that they respond to similar determinants”, but either separately or together the picture is consistent: higher levels of transparency and independence lead to lower inflation and less volatile inflation.

Bottom line – and this is my take, not Wheeler’s words – there’s good reason to be very sceptical about relaxing or overriding our current inflation targeting regime, and equally good reason to steer clear of letting the pollies back in charge of it.