NewstalkZB asked me Monday morning to comment on the new .05 drink driving limit.

I noted that it is likely to prevent some crashes, but that I did worry about whether it was worth the cost. The cost-benefit analysis that formed the background to the RIS wasn’t bad, but did have a few things that gave cause for concern.
Here’s the table of behavioural assumptions that fed into the cost-benefit analysis. 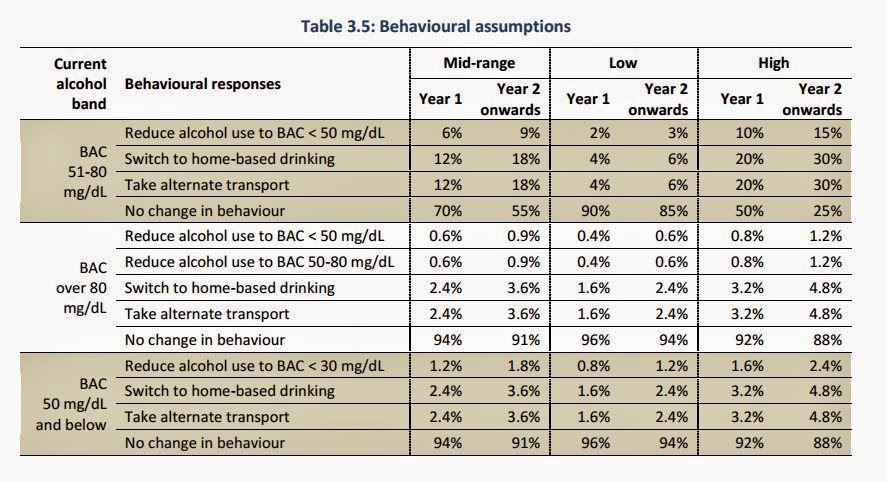 They expect that 94% of drivers who are currently drinking to less than the .05 level will have no change in behaviour, 2.4% will take alternative transport, 2.4% will switch to drinking at home, and 1.2% will flip to drinking to less than a .03 level.
While there’s been a lot of media play on how much you can drink while staying under the .08 limit, and that’s up to 8 standard drinks for an 85 kg male on a 2-hour window, that’s not the safe limit. Rather, it’s how much you can drink and have a 50/50 chance of being nailed for drunk driving. See table 3, here.
A half litre of Renaissance Stonecutter Scotch Ale is 2.8 standard drinks. Three half-pints in a two-hour window, 4.77 standard drinks, is safe for an 85 kg male at the .08 limit but not safe at the .05 limit. At the .05 limit, the “safe” level is just over one pint per two hours. For a 55 kg male, even a half-litre is unsafe because the safe threshold is 2.5 standard drinks.
It consequently seems pretty implausible to me that we wouldn’t have more substantial changes in behaviour than those here assumed. While that might have some consequent improvement in accident reduction, the effects on consumer surplus will be rather more substantial. The risk-averse will be targeting .03 to avoid hitting .05 and consequent penalties.

Their mid-range estimate has the 10-year aggregate loss in consumer surplus at $900,000 for the whole country. That’s around $130,000 per year if they applied an 8% discount rate, or $2500 in lost consumer surplus, per weekend, for the whole country, assuming that all drinking is done on the weekend. It just doesn’t seem plausible. I’d be willing to pay $100 per year to be able to stick with .08 instead of .05, which would let me keep aiming at .05 rather than having to target .03. If there are at least 1300 people like me, across the whole country, then they’ve messed up the consumer surplus calculations substantially. In a country of 4 million and change, well…

It’ll be interesting to see how this plays out, not only in the accident stats, but also in patronage at after-work functions and at rural pubs.