Today’s Monetary Policy Statement from the Reserve Bank didn’t have any headline surprises – the official cash rate was kept at 3.5%, as everyone had expected, and any eventual increase is now pushed out to late 2015 or early 2016, again much in line with current market expectations.

There had been some talk that the Bank had been a bit premature with its interest rate increases – there were questions at the post-match press conference about whether the Bank had tightened too much, or had expected more inflation than has actually happened – and even that its next move might need to be a cut in interest rates. Governor Graeme Wheeler ruled that out – “we’re not anticipating a cut at this stage”.

So all much as expected, but that said, there was some interesting stuff in the body of the Statement.

One big thing that stood out for me was the stronger track now being forecast for GDP growth: I’d been somewhat concerned about what happens to our growth rate when the Canterbury rebuild tails off: on the latest forecasts (below), this is looking less of a worry, and all going well we should see the unemployment rate keep dropping, to below 4.9% by March ’17.

Another interesting development was lower domestically-generated inflation than you would normally have expected in an economy performing as well as ours currently is. Here’s a chart (Figure B1 in the Statement) showing where the rate of domestic (“non tradables”) inflation has actually been, compared to where you would have expected it to have been based on the strength of the economy and people’s inflation expectations. 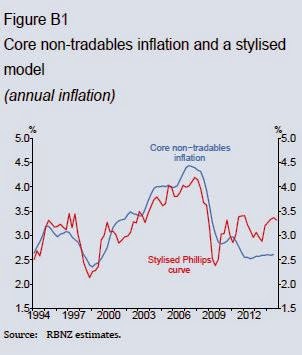 You can see that domestically-generated inflation is running about 2.5%, when economic conditions like today’s would have led you to believe it should have been more like 3.25% to 3.5%. There was a bit of attempted blame-slinging from the media at the press conference about this, along the lines that that the Reserve Bank missed it (and, implicitly, raised rates too soon or too much). But as I’ve said before, the Bank was in good company. And in any event nobody yet really understands why it’s happened here and overseas (“Research into what has caused inflation to be unusually low continues”, as the Statement tactfully put it).

I don’t know if John McDermott. the Bank’s Chief Economist, was right when he said the Bank was less wrong about this than a lot of other central banks and forecasters. But I certainly agree with his follow-up comment that, rather than looking at it as a forecasting failure, the lower than expected inflation is actually a positive development: it means that economic expansions can be let run for longer, without central banks (as the old monetary policy saying goes) having to take the punch bowl away just as the party has got going.

Brian Fallow, the Herald‘s eminent economics correspondent, may have added a new monetary policy phrase to the lexicon when he asked a question about long term interest rates*. He noted that the Bank had said (in this speech) that it didn’t control long-term interest rates (because they’re largely set globally). But in that case, Brian reckoned, the RBNZ may lose control of some mortgage rates: people on longer-maturity fixed rate mortgages will be paying rates essentially set overseas. Will the Bank be left, as Brian put it, with “spongey brakes”?

*Brian tells me since I wrote this that it’s not original to him, and he recalls it being used in Alan Bollard’s day. Even so, it was a good time to dredge it up.