Now, there’s a sense in which this is true: a “neutral” rate, neither supportive nor contractionary, is reckoned to be around the 4.5% mark, so 3.5% is clearly on the stimulatory side.

But in terms of the overall tightness of monetary conditions, you can’t look at the cash rate in isolation. It’s the combination of interest rates and the exchange rate that makes life easier or harder for people and businesses. An OCR of 3.5% may be “providing support”, but that doesn’t mean a lot if the Kiwi dollar is so high that exporters are severely constrained. True, it would be better than 4.5% and a high Kiwi dollar, but that would be a rather moot consolation.

So here once again is my calculation of the overall tightness or otherwise of monetary conditions, as captured by the old Monetary Conditions Index, which mashes together the 90 day bank bill rate and the trade-weighted index of the Kiwi dollar into a single overall number. 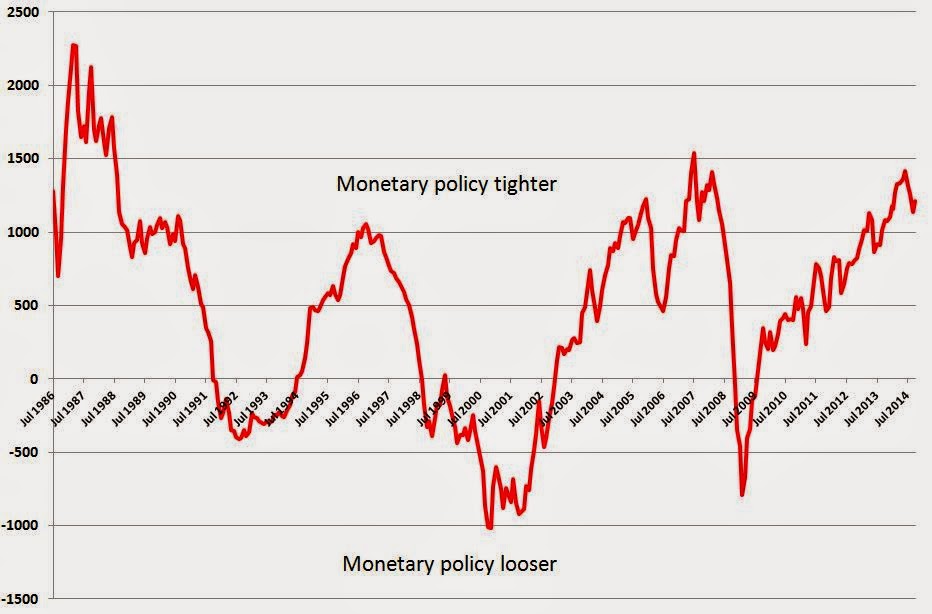 The reality is that overall monetary policy conditions are tight. Tight, tight, tight. They’re on a par with periods in the past when we were dealing with reasonably serious inflation pressures.

Not that there’s a lot the Reserve Bank can do about it, as there’s no feasible OCR that would bring monetary conditions back to neutral, let alone to the stimulatory side of neutral.

If you said that “neutral” is some kind of long-term average of the Monetary Conditions Index, then neutral would be about 500 (averaged over the whole history of the series since mid 1986) or about 350 (if you start in January 1991 after the initially brutal disinflationary period). The current MCI is around 1200: to get it to a neutral level around the mid 400s, you’d need a negative OCR at -4.0% or so.

Alternatively, if the OCR stays at 3.5%, you’d need the Kiwi $ to be roughly 14% lower for overall conditions to be neutral – say in the high 60s against the US$ rather than the current high 70s.

However, you look at it, though, you begin to come round (as I also did a wee while back) to the conclusion that, with the best intentions, and on the best decisions made in the light of the best info at the time, we’ve nonetheless ended up tighter than we ought to be. I’ve a great deal of sympathy for the view (as put by John McDermott, the RBNZ’s Chief Economist, at last week’s MPS press conference) that monetary policy making in real time is an evolving process of learning and adaptation as you go along. I’m beginning to think that the next step in the process ought to be a few steps backwards for the OCR.