The ODT’s Eileen Goodwin asked me for comment on CEO pay in New Zealand; I’m quoted briefly in this story. Here’s what I’d sent her; the ODT story wasn’t able to include any of it but did quote from our prior phone chat. I wish she had made some use of the data I provided on top-1% earnings for context though.

We should start by looking at whether there actually has been any great increase in earnings in the top 1% relative to others, just so we have the data right.

I created this chart from the World Incomes Database. You can check my numbers at http://topincomes.g-mond.parisschoolofeconomics.eu/#database. The only difference between those figures and mine is that I averaged incomes between 1999 and 2000 for everybody, because the change to the 39% top marginal tax rate had a pile of people bring forward income to 1999 from 2000, making 1999 look super rich and 2000 super bad. Best is then just to average the two. I set everyone’s income in 1953 to be equal to 100 to get an index score, then looked at growth from then onwards relative to the 1953 baseline. That makes it really easy to compare income growth in different cohorts. Note that these are real inflation-adjusted figures. 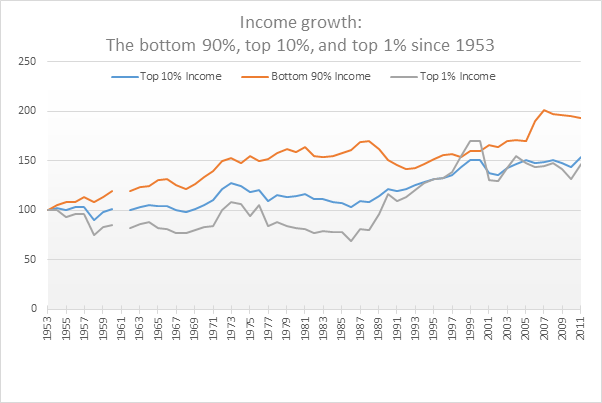 This is further confirmed by the Ministry of Social Development’s recent report. You can check it at the link; I’ve pasted the relevant table below.

“Overall, there is no evidence of any sustained rise or fall in inequality in the last two decades. The level of household disposable income inequality in New Zealand is a little above the OECD median. The share of total income received by the top 1% of individuals is at the low end of the OECD rankings.

Note:  See the main report for details about the sources for the figures in the above tables.

So, top 1% earnings here are hardly high by either a historical comparison within New Zealand, nor by any international standard. And inequality in New Zealand is middling by OECD standards.

The MSD report also points out that while wealth inequality is higher than income inequality (and data on it less reliable), what we do know about it is that the top decile’s wealth share here is about on par with France and Canada, and lower than Norway and the US. Further, when we account for that much of the country’s wealth is held in the form of mortgage-free houses by the elderly who have low incomes, the joint distribution of wealth and income is far more equal than if we look at wealth alone: a lot of people with high wealth have little income.

In my view, inequality has taken on a lot of salience in New Zealand for two main reasons. First, inequality in the US has risen substantially – though not here. New Zealand is way too quick to assume that whatever’s happening everywhere else is also happening here. Please look at the data above and help people to at least base their opinions on what the data actually says about things here. Second, the ridiculous run-up in housing prices, due mostly to Council restrictions preventing new building, has made housing really really unaffordable for a lot of even middle- to higher income New Zealanders. They then blame richer people for bidding up the price of housing – and they’re especially prone to blaming rich foreigners. It’s right to be concerned about housing costs, and especially about that housing costs eat up way too much of household incomes for lower to middle income families. But that’s not a problem with inequality – it’s a “not building enough houses” problem.

With that established, let’s look at some of the evidence on CEO compensation.
Edward Glaeser finds that executive compensation in the US is strongly related to firm performance. See the first paper in this set.

Adams et al find that Swedes with higher cognitive andnon-cognitive abilities get put in charge of larger companies. Better CEOs sort to the bigger firms where their skills are more needed; CEO pay then reflects both their abilities, and the size of the firms they have to manage.

Kaplan and Rauh find that top CEOs have been gettingbigger pay packets largely because the market has gotten a lot bigger and morecomplicated: the CEO job has gotten harder at large firms, and so the gains from having the best people have gone up too.

Again, this is consistent with the view that shareholders generally do well in keeping an eye on their boards, that boards pay what’s necessary to attract top talent, and that the importance of having strongly performing CEOs has increased.

Another way of testing? What happens to a firm’s value when the CEO dies unexpectedly. Here’s Nguyen and Nielsen. In short, there are sharp drops in firm valuation (share price) on the death of a CEO. They argue that for every extra dollar of wealth that a CEO creates for the company *over and above what someone else in the job would have created*, that CEO keeps about $0.75 and shareholders get $0.25. Other papers using different measures find that CEOs keep a much smaller fraction of the wealth they create for shareholders; the high estimate here may reflect some drop in value due just to the uncertainty about who the successor will be.

If there are problems in CEO compensation, they will be specific to individual firms. If a CEO has managed to pack the Board with friendly supporters, that CEO could be getting paid far more than he or she deserves. That makes the case not for any kind of blanket rules on CEO pay but rather for making sure that corporate governance is strong: that shareholders maintain control of the firms they own, that Boards are active in monitoring performance, and that shareholders sack Boards and CEOs if they can get a better deal elsewhere.

I hope this helps.

It’s always interesting to keep track of what bits get used and which bits don’t.

Update: for the benefit of those who, like Keith Ng, seem to want to assume I did something dodgy in choosing 1953 as a baseline year, go and check the original source data. The basic reporting unit changed from 1952 to 1953 so the data isn’t consistent; they have ’em as different data series. I chose 1953 because it was the earliest consistent year in that dataset; I chose that dataset because it’s the longest term data I’ve yet seen on income distribution in New Zealand. Maybe Keith would be happier with a 1984 base year because then he could be all mad about income increases for the top 1% in the late 80s; maybe somebody else would like a 1999 base year so they could be all mad about income declines for the top 1% since then. The nice thing about choosing the longest possible data series is that anybody can then truncate it to later points if they want to think about alternative base years. I’m hardly hiding the increase in top 1% incomes in the late 80s; I’m just failing to hide the prior long term decline in earnings among the top 1%.

Update2: Keith’s only unhappy that I took 1953 as base year, not that I included the full data series. People can use whatever base year they want. In absence of some big reason for picking one over another, I go with the earliest; you can easily run ocular re-basing to whatever base-year’s desired.