The Productivity Commission has just come out this morning with an interesting new Working Paper, “Who benefits from productivity growth? –The labour income share in New Zealand”, and if life’s too short, there’s an accompanying “cut to the chase” summary. The labour income share, by the way, is as it sounds  – “The labour income share (LIS) is the proportion of income generated from production that is spent on labour in the form of wages and associated on-costs” such as employers’ super contributions. The rest of the income in the economy is attributed to capital, so the paper is about the split of national income between wages and salaries on the one side, and returns to the owners of capital on the other.

At first sight, the headline finding risks feeding the post-Piketty fears of those who think the working stiff is losing out to the plutocrat: here’s a graph (it’s Fig 1 in the summary) of GDP and labour’s share of it. The labour share’s gone down from around 64-65% of GDP to around 56%. 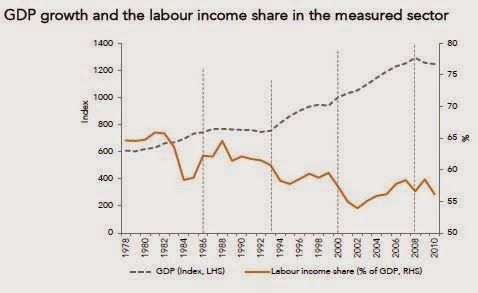 But whether this is a good thing or a bad thing isn’t at all obvious: as the paper says (p6), it “depends on the situation and is partly a matter of preference. For example, would New Zealanders prefer to participate in an economy where real wages are increasing strongly but the LIS is falling because productivity growth is even faster, or an economy with weak growth in real wages and productivity so that the LIS is more constant?”, and the paper steers clear of making any judgement calls.

One factor in the background is that capital’s share will depend on how much capital there is. If there’s a lot more capital going into the business of producing GNP then there used to be, and most of us would reckon that’s a good thing (lots more equipment at work in the Aussie economy is one of the reasons Australia has been growing faster than us in recent years), then its share will tend to go up and labour’s to go down. It’s not a given – could be, for example, that wages go up fast enough for labour’s share of the total cake to hold up – but it’s likely. And as it happens, we have in fact seen the amount of capital in use growing faster than the amount of labour employed. Here are the numbers. ‘MS-11’ in the title is the 11-industry ‘measured sector’ that the paper has looked at, and  ‘MFP’ is ‘multifactor productivity’, or that bit of GDP that isn’t explained by increased inputs of labour and capital.

The fall in labour’s share is also not a uniquely Kiwi phenomenon, by the way, if you’ve been thinking deep dark thoughts about the distributional consequences of Rogernomics and its successors*. In a range of OECD countries the labour income share typically rose to a peak in the late ’70s or early ’80s and declined since as a result of a bunch of things. As the paper notes summarising the research on the whys and wherefores (p10), “Perhaps most importantly, technological advances that have increased the return on capital have led to capital deepening as businesses have substituted capital for more-expensive labour…Other contributing factors include shifts in industry composition towards more capital-intensive industries, increased globalisation that increased the global supply of cheap labour, and institutional developments that have reduced labour’s bargaining power”.
And if you’re still nurturing “they’re watering the workers’ beer” thoughts, the paper shows that there are actually good links between the value that employees bring to their business (the growth in labour productivity) and what they get out of it as a result by way of higher real wages, as these two charts from the summary show. Over time (left hand graph)  and across industries (right hand one), if firms are doing well because the employees are more productive, it turns up in the payroll run.

The paper doesn’t have a lot to say about policy, and that’s fine, it set out to be more of an analytical piece, but what it does say is sensible: if there are all these trends buffeting labour’s share of the goodies, then (from p7)

benefiting from new technology requires investment in the necessary complementary skills. In particular, the education system must be of high quality and sufficiently responsive to provide new and dislocated workers with the skills they need to enter productive and lucrative occupations where they can make the most of new technology. Policy should also work to minimise entry barriers and other frictions, such as excessive occupational licensing, that prevent workers from moving to where they can work most productively. There is also a geographic aspect to this in that cities are one of humankind’s most productive inventions. So restrictions on housing supply that mean low-skilled workers cannot afford to live in economically dynamic places can limit productivity growth and economic resilience to change.

Even if policy is set just right to ensure that the benefits of technology-based growth and globalisation are widely spread, a social safety net may still have to catch people who fall through the cracks. Accordingly, policy must ensure that social services function effectively to deal with the side effects of rapid technological change

It may not be original – much the same policy combo is what has traditionally been prescribed to cope with the impact of freeing up international trade – but it’s none the worse for that.

Another thing I liked about this paper is that it’s given us a handy summary way of thinking about our recent economic growth, and here it is. You’ve got the different growth cycles, and their sources, all in one nicely packaged schematic. 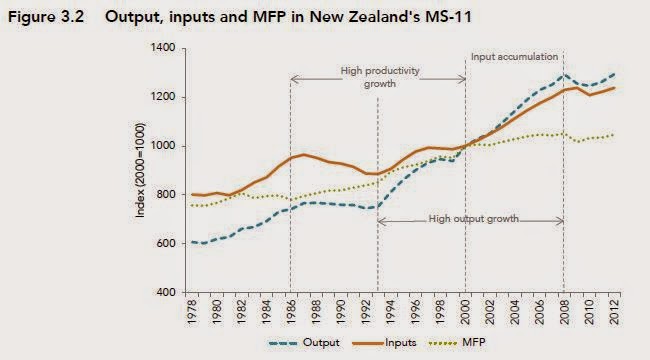 As the graph indicates, we had a ‘high productivity’ phase in the 1990s, when that tricky multi-factor productivity kicked in much more forcefully than it had been doing before, or has since. Australia did, too, as the data below shows (snipped from Table 6.2 of the paper). 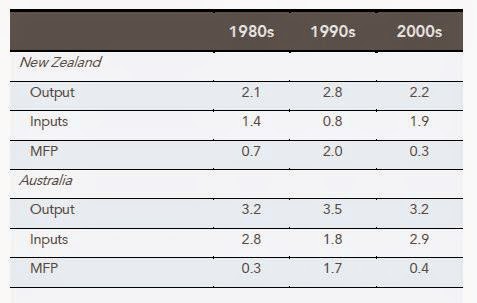 And that brings us to the biggest policy questions of all. Where did that surge in productivity come from? Why did it go away? And, most crucially, can we get it back?

*I’d also note that one of the bigger dips in the labour share occurred pre-reforms, in 1982-84, when Muldoon in his Late Anarchy period imposed a wage and price freeze. As the report notes (p39), “In practice, this proved to be more a wage freeze than a price freeze”.

0 Responses to “Who got what?”