I wrote a while back about the excellent data the Bureau of Labor Statistics in the US produces on the labour market – what they call the JOLTS data (Job Openings and Labor Turnover Survey). You can access it yourself here. The graph below shows the key results from the latest (December ’14) reading. The mechanics of the thing are simple – when hires (the blue line) are greater than separations (essentially layoffs and quits, in red) total employment grows (in green). What’s really striking about the US labour market – and indeed most labour markets – is the huge gross flows compared with the much smaller net outcome. In December alone, for example, hires were 5.1 million and separations 4.9 million: for 2014 as a whole, there were 58.3 million hires and 55.4 million separations, for a net gain in employment of 2.9 million.

We don’t have the equivalent set of data in New Zealand, though it is on Stats’ radar, but we do have some data that shows the same patterns operating here. Here, for example, are the numbers of jobs created at new firms, and the numbers of jobs lost through firms closing – the jobs associated with company ‘births’ and ‘deaths’. The numbers come from Stats’ Linked Employer-Employee Database, and again you can find them for yourself at Stats’ (free) access site NZ.Stat under the ‘Business demography statistics’ heading. 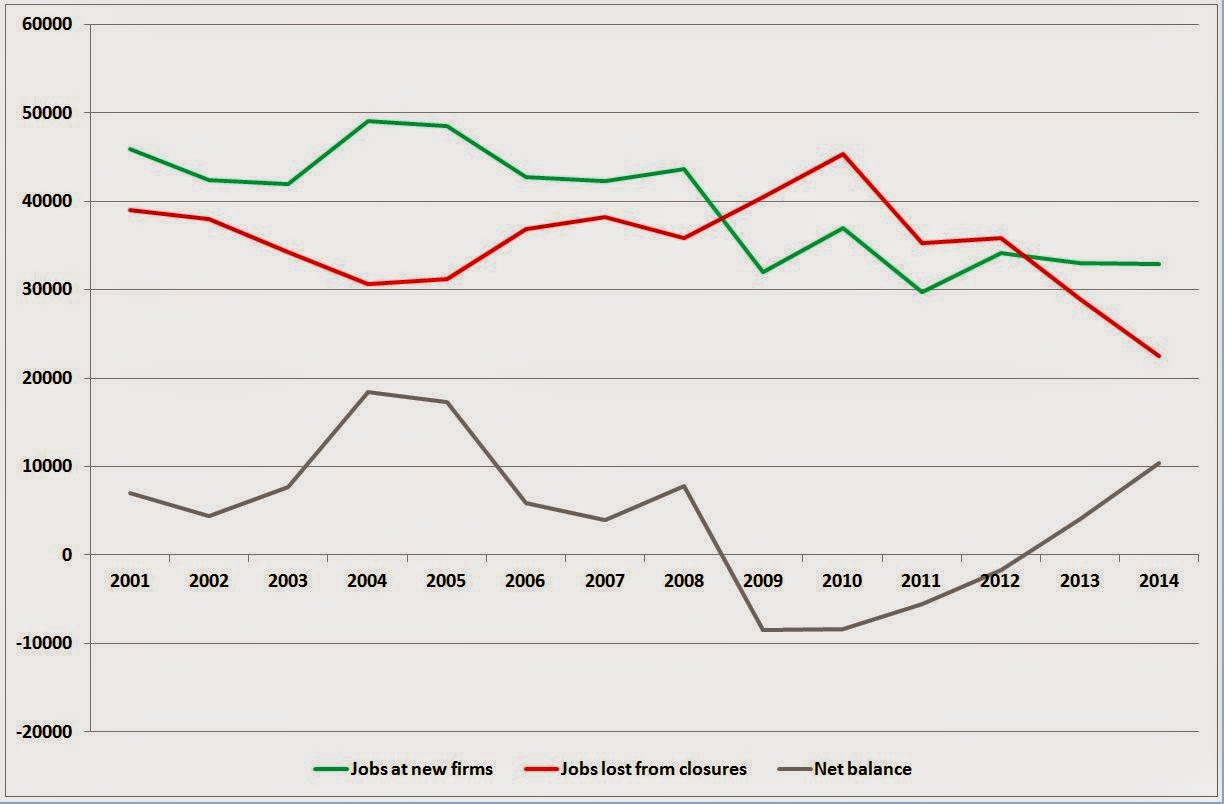 This is only a slice of the labour market – the bigger part is the hiring and firing at ongoing firms – but it’s interesting nonetheless. Again the gross flows are considerably larger than the net flows.

What’s the relevance? It’s because most folk (I believe) don’t realise this is how the labour market works. I’d guess that most people reckon hiring dries up during a recession, and layoffs dry off in good times. They don’t: there are very large numbers of new hires even in bad times, and very large numbers of layoffs even in good times. Rather, the ratio between them changes: hires drop faster than layoffs in bad times, and grow faster than layoffs in better times. But both power along in large volumes all the time, with a high degree of churn or turnover going on. There’s a vast amount of matching and rematching going on all the time as both employers and employees look for the best fit. The efficiencies from a process where people are continually looking for the best option for both parties must be very large indeed..

The wrong idea, that layoffs happen only or overwhelmingly in bad times, tends to lead to a well-intentioned but wrong policy prescription: that if we stop the layoffs, we can keep employment up. Unfortunately in some over-regulated markets, ‘job protection’ measures, that aim to make it harder to lay off people, gummage up both sides of the labour market. Employers can’t lay off people when they’d like (or need), and knowing that, they’re less inclined to to hire in the first place, or only in unregulated ways (eg with short term contracts that don’t accrue the same protection rights). Much of continental Europe is lumbered with high unemployment as a result. Well-meaning but inefficient job protections aren’t the only reason for Europe’s high unemployment, of course, but they’re a part of it, and likely to be a substantial part of it when it comes to youth unemployment or the unemployment of more marginal groups in general.

There’s also a school of thought that employees need to be protected, because the employers have the whip hand: there’s some kind of market power on the employers’ side. That’s not true, either. Have a look at this, also from the latest JOLTS data. 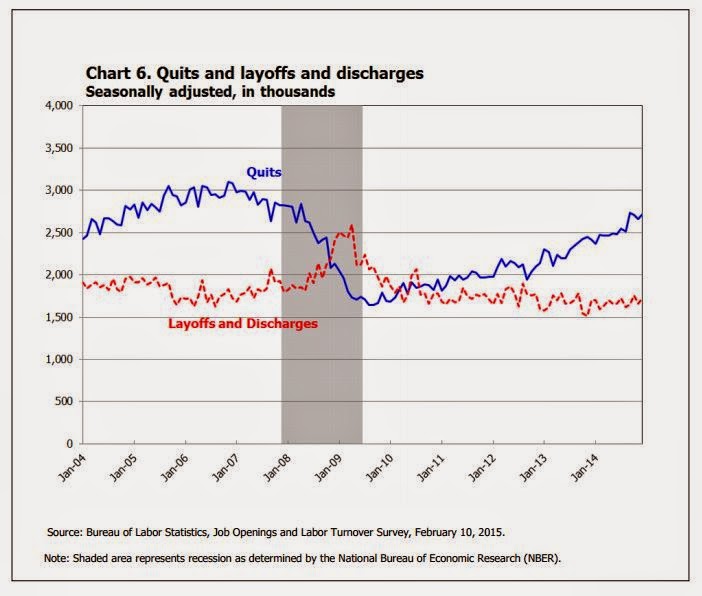 In fact, things don’t just ‘happen’ to employees at employers’ discretion.  Most of the time, voluntary ‘quits’ are substantially larger than involuntary layoffs. In a bad recession, more people than usual prefer to sit tight, for obvious reasons. But usually there are substantially more people leaving jobs of their own volition than are leaving them because they’ve got the pink slip. Again the efficiencies – and personal career and life satisfaction – from a system where people can freely leave and freely find new jobs must be enormous. Anything that throws sand into this process – and it’s not just job protection regulation, but could be barriers of other kinds, such as the US system of employer-provided medical insurance, or in New Zealand arguably differences in regional housing costs – risks jeopardising one of the main productivity engines of a modern economy.